Preface: I was in the process of developing a live blog through Game 1 of the ALDS between the Boston Red Sox & Los Angeles-Anaheim Angels but had some technical difficulties which almost placed my computer through the f'n window. So I'm just going to take you through my baseball filled night:

5:30 pm While swearing uncontrollably at the traffic on 290 during my ride home from work, I was finally able to get a Phillies v. Rockies upda 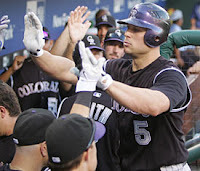 te. Not good, sitting in the virtual parking lot I slammed the steering wheel with both fists and cursed the fighting Phillies. Cole Hammels gets roughed up in the third inning, other than that he pitches a pretty good game but the Rockies are able to hold on 4-2. Somehow I forgot about Jeff Francis in my predictions, now I look like an idiot, but i'm used to that. Matt Holliday continued to flex his MVP muscles by slamming a homerun out of Citizens Bank Ballpark in the 8th to cushion the one-run lead and slam the door on Game 1. I'm down 1 game so far. sidenote: Hammels experienced a Janet Jackson like wardrobe malfunction in that 3rd inning, because wearing a long sleeve shirt in the middle of the afternoon, underneath a thick game jersey when your about to pitch in your first playoff game, in front of rabid Philadelphia fans with no self control, somehow this was a good idea.
6:40 pm Television is on mute, Joe Castiglione is doing play-by-play, Chone Figgins name is spelled wrong, and Beckett has begun to deal. Playoff baseball in Boston, only a few things in life are better. Figgins lead off with a single, I'm not worried at all, Beckett has the Pedro Martinez face on, I'll try to put that face in words for you, it goes like this "I'm going to own you, and every batter behind you, you may attempt to get a hit off me, but I'll torch the next three batters and leave you stranded."
6:54 pm Kevin Youkilis takes John Lackey deep and Lackey then proceeds to mutter "why do they have me pitch in this place, i'm 0-6 lifetime in this park."
(no live blog available, technical difficulties . . . . )
Game Summary: BOO-YAH, Beckett stomps on the Angels, complete game 4-hit shutout. Ortiz does what Ortiz does in the playoffs, 2-run jack. Red Sox 4, Angels GOOSEGG. Josh Beckett is a big game pitcher, and last night was a big game, Nuff Said. I just 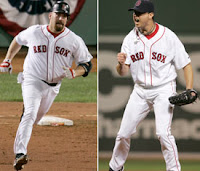 have one rant I need to go on and here it goes. Two years ago when Boston made the trade for Beckett and Mike Lowell (believe it or not, Lowell was a throw in) people ripped this trade for the entire season last year, and now I don't hear one word from those people. Mike Lowell has played better than any offensive player on the Red Sox this year, nevermind his clubhouse leadership and the awesome leather he flashes on a daily basis, this guy is more than expected. But Josh Beckett has broken out, he's the ace whose back the Red Sox will ride to the World Series, he's more mature than he has ever been, and he knows how to pitch a game. So two words I never want to hear again, HANLEY RAMIREZ.
Cubs @ Baby-Backs . . Here's what you need to know about this game, Lou Pinella trusts his bull-pen, fears Brandon Webb, and will be crucified in Chicago when they lose the series 0-3. Oh Yea, Brandon Webb just proved again why is the most dominant pitcher in the National League, seven innings, 4 hits, 1 run, & 3 walks. Unfortunately sweet Lou didn't let Big Z battle Brandon through seven innings, he pulled his ace to save him for later in the seri

es, Carlos Marmol subsequently gave up a homer to Mark Reynolds and the Diamondbacks never looked back. Cubs misery trip begins and were staring the least exciting NLCS right in the face (if i have to watch the rockies v. d-backs i'm going to kill myself) . . . .D-Backs up 1-0. Heres the way I see it, If your starter is showing signs of wearing down, you probably aren't going to do well on 3 days rest anyway. With that said, NO I DON'T THINK Z was SHOWING ANY SIGNS OF WEAKNESS AFTER 85 Pitches. Thats why the Cubs are the Cubs.
Three games down, I'm 1-2 . . . Go Yan YEA RIGHT LIKE i'd go through with that comment!
Posted by Lynchy at Thursday, October 04, 2007