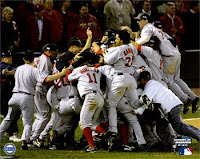 It's tuesday morning . . Game 1 of the World Series starts tommorow night, and I can't wait. I'm going numb just thinking about a second World Series Trophy making its way through Copley.
(Insert rediculous sound effect that takes you back in time)
I was sporting the Curt Schilling jersey, in the drizzling rain @ 5:00am, and no I wasn't drunk. I was getting prime standing room along the first Boston Red Sox World Series Championship parade route in 86 years. My girlfriend and her friend were fetching coffee, (one of the two drinks all women should get for their man) and I experienced 5 of my 15 minutes of fame. Local FOX news man, Doug Goudie, tapped me on the shoulder and said "Hey Curt, can we get a minute?" . . . I turned around and saw a television camera, and this guy holding a microphone out at me. Quickly realized he thought I was Curt Schilling (yes, it was his feeble attempt at humour) I then went on a 5-minute Schilling like rant, apparently I thought it was also funny to tell him that my ankle was feeling fine, and I cant' believe I'm standing in the rain @ 5am, sober. Hoping that someone saw it at home on televison, sure enough my uncle Jimmy and my godmother both saw their proud nephew, half awake, and standing with hundreds of other people who are skipping work, school, or their general responsibilities to celebrate the first World Series championship in 86 years, back in the Hub.
(Insert rediculous sound effect again)
Will I be at this years parade, if they have one? You betcha. I saved one vacation day this year, in hopes that I would be able to use it on that specific day. I've even drafted up my two-week notice in preparations if they don't allow me to take that day off, yes I'm that serious.
TO THE BLOG:
I consider myself a New England sports fan, so the fact that I live in the "epicenter of the sports universe" allows me to give you a line-up to follow from Wednesday till Sunday:
Wednesday, October 24th
Game 1 of the 2007 World Series of Baseball, the Boston Red Sox play host to the Colorado Rockies, 8:00pm. FOX analyst, Eric Karros, brought up an excellent point, Beckett is pitching great, actually out of this world, but the Rox haven't played in 8 days they could be a little rusty, what better way to completely throw them off balance than, THE KNUCKLEBALL. You could argue that after game 4 of the ALCS the Cleveland hitters were never the same, they scored a combined 5 runs in the next three games against the Sox. FACT: Wakefields knuckleball gets hitters completely out of sync, when the Rockies took 2 of 3 from Boston back in July, it was only Tim Wakefield who shut them down 2-1, Sox won that game. Beckett suffered his first loss in 9 starts that weekend, just ponder it, thats all i'm gonna ask, keep in mind "that knuckler ain't knuckling in the thin air of Colorado."
(after I made the argument, I found out Wake was left off the roster, bum shoulder . . LETS GO JULIAN TAVEREZ)
Thursday, October 25th 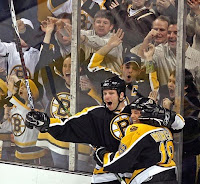 Chicago Blackhawks at the Fleetcenter in some preseason action against the Boston Bruins at 7:00pm , errrr wait, what? The regular season already started? My bad. For anyone who likes watching hockey games live and has a $5 in their wallet, I'm sure you could get center ice at this game. The 5-3 Bruins try to defend their undefeated home record, Joe Thorton goes for a hat trick, errrr wait, what? The Bruins traded Joe Thorton, LAST YEAR? My bad, I must really not be paying attention to hockey at this point, or any point in the last 24 years.

ESPN Thursday night GAME OF THE WEEK, Boston College puts their 7-0 record, #2 National Ranking, and #1 Heisman Trophy Candidate on the line in Blacksburg, Virginia against the Virginia Tech Hokies. All those accolades thus far and BC is still getting points as the underdog on the road. BIG STATEMENT GAME ALERT BC will try to announce themselves as a legitimate ACC Championship & National Championship contenders.
oh yea, Game 2 of the World Series of Baseball at 8:00pm in the Bean
P.S. Yankee fans hows it feel to be at home, AGAIN, watching the Red Sox in the World Series, AGAIN, the Yankees got knocked out in the ALDS, their fans have no idea what is going to happen in the offseason, and Yankee President, Randy Levine still hasn't run out of mop n' glow for his hair. Thought I'd squeeze that in.
Friday, October 26th
The new look Boston Celtics take on the Cleveland Caveliers in the last pre-seasn game of the season. Like

C.C. Sabathia & Fausto Carmona in the ALCS, Lebron probably won't show up to play in this last exhibition game. My friend Dan will not be able to control himself watching yet another meaningless four quarters of basketball cheering for the likes of Leon Poe & James Posey. I'm boycotting the Pre-Season in any sport after the DCU center debacle in my hometown on friday night, the tix were comps from my friend Jerry, so no real loss, but I still take the opportunity to complain as often as possible:
$0.00 for Comped Tickets
$20.00 for Parking, IN WORCESTER
$18.50 for two beers & an individual pizza
Being embarrassed about coming from the city which crammed fans into an obviously to small arena to watch Garnett, Pierce, & Allen warm-up then subsequently play for five minutes then sit back down and have the game get canceled at half-time because the ice from the AHL team that plays at this crappy place is leaking through the floor . . . . . .Priceless
Saturday, October 27th
Not checking if there is a Bruins game, because I don't care.
Game 3 of the World Series of Baseball, Series is traveling to a city which will most likely have fans waving some rediculous rally toy and shaming every real baseball fan in America. I'll be taking the over/under on when Rockies fans stop coming to games (sometime in April) This game will be playing at an obsurd time for all our Japenese contingent watching overseas. Hopefully Denvers son, Woody Paige cuts off Tim McCarvers head and takes over the broadcast booth, I've also placed an over/under on when that happens. Go Sox!!
Sunday, October 28th

Redskins are coming up to New England for an afternoon affair. I am a Cowboys fan first and foremost, so I am not allowed to cheer for the Redskins ever, even if Joe Gibbs gets cancer I coudln't cheer for them. But in all honesty, theres a better chance of the USC football team almost getting in another plane crash this week than the Patriots not scoring 35+ points. How many points do the Pats have to be favored by for them to not cover? 21? 24? Matt Cassle should play every down from the 3rd Quarter on, for the rest of the SEASON.

Game 4 of the World Series, "And Foulke has it, he flips it to Mienkewitzzxgd (can't spell his name), the Red Sox have won the World Series, CAN YOU BELIEVE IT?" ooops what year is this? 2007 you say? A Colorado sweep would be in place if I had all my dreams. "And Gagne has it" hahahaha "And Papelbon has it, he flips it to Youkilis, and the Red Sox have won the World Series, I DO BELIEVE IT" I'm not saying I think the Red Sox will sweep this series, especially because the Rockies are white hot heading into the series. But I'm not all that nervous, I mean I think the sox could be down 1,000,000 games to 1 and come back and win a series now.

THERE IS ONLY ONE OCTOBER!!!