Who's Cooler Than Joe?

Newly minted Super Bowl XLVII MVP Joe Flacco, just completed the greatest postseason of any Super Bowl winning quarterback in the 2000's, now what do you have to say? Zero interceptions in 126-passing attempts, that's seven fewer Peyton threw in 2006. A 117.2% QB passer rating over four games, better than Drew in '09, Aaron in '10, and Eli in 2011. Eleven touchdown passes, that's four more than Ben in '05 and six more than Tom in '04. 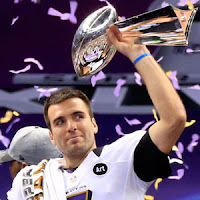 Got anyone else we've forgotten to cover? For the non-believers who'd still like to squeeze him into the Dilfer/Johnson category, and we mean no disrespect to either of them, but you all are reaching. Let's just put it all to bed now, over four games free-agent to be Joe Flacco just made himself upwards of $100-million dollars and earned the respect of everyone across the entire country.

Since parting ways with the only other Super Bowl winning quarterback to wear a Ravens jersey (Trent Dilfer), Baltimore fans suffered through the likes of Elvis Grbac, a beyond-his years Randall Cunningham, Jeff Blake, Chris Redman, Anthony Wright, Kyle Boller, the late Steve McNair, and Troy Smith, all culminating in the firing of former head coach Brian Billick. However, since selecting Joe Flacco 18th overall in 2008, the Ravens and their legions of fans have never looked back. Flacco has started every game under center (91 straight-including postseason starts), became the greatest passer in Ravens team history, and solidified the position under center for the Ravens foreseeable future.

With all that being said, the most impressive thing which Joe Flacco accomplished last night was a more symbolic moment than anything else. While standing atop the championship podium, side-by-side with Raven legends Ray Lewis and Ed Reed, Joe Flacco ripped hold of this defense-first franchise of the past 12-years and made it his. At some point during this postseason, whether it was the moments between Ray Lewis' final time-out in Charm City and Joe Flacco out-playing Tom Brady and Peyton Manning in their own buildings, Baltimore became his. Flacco never showed that he was frustrated with the critics and maybe he never was, it's possible that Joe Flacco only needed the men in that locker room. Ed Reed and Ray Lewis placing their individual faith in Flacco, and Joe Flacco in return finally helping Ed Reed get his first Super Bowl ring, and sending Ray Lewis out in style.

For that, Baltimore Ravens owner Steve Bisciotti is going to open his check book and Joe Flacco has earned every nickel he's going to get paid.