What a GREAT Week 1 in college football that was?!?! Mike Gundy and Oklahoma State hung an 84-0 whipping on Savannah State, for which the Tigers of Savannah received a check for $385,000 for showing up in Stillwater. Boise State began their post-Kellen Moore life on Friday night in East Lansing, and quietly exited any BCS conversation before the night was over. The Fighting Irish and Midshipmen got after it across the pond from Dublin, Ireland. From Chestnut Hill, MA to Eugene, OR college football kicked off in a big way, here's what we learned . . .

The Trojans got the double-edged sword this weekend. As they watched their Heisman candidate, quarterback Matt Barkley, post a 372-yard, 4 touchdown afternoon on Hawaii en route to a 49-10 victory, the rest of the country could care less. Then the story broke that former Trojan running back Joe McKnight, may have accepted inappropriate gifts from a USC booster. These are the problems playing in Southern California. You'll rightfully get all the pre-season hype, however, 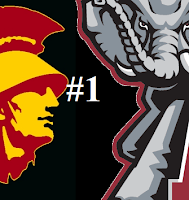 once the season gets under way the rest of the country only checks up on you to ensure you are winning and staying eligible. As the Trojans were beating up on Hawaii, the defending National Champion Tide were burying a Top-25 opponent on a neutral field. When the first in-season polls came out yesterday, was it really a surprise to anyone in Los Angeles that the Trojans had slid to #2?

What more do you need answered? The Crimson Tide defense held now former Heisman candidate, Michigan's quarterback Denard Robinson to 27-yards rushing on ten carries while turning over the Wolverine offense three times. Alabama jumped out to a 31-0 lead and never looked back. Their rushing attack churned out 5.5 yards per carry amassing over 230-yards on the ground. Junior signal-caller A.J. McCarron displayed a workman like performance completing 11 of 21 passes with 199 yards through the air and two touchdowns. Make no mistake about it, Michigan is not overrated, the Tide are just that good. Alabama had to go into this season replacing six defensive starters, and defensive coordinator Kirby Smart along with head coach Nick Saban were prepared to use Michigan and The Cowboys Classic as a jumping off point to prove to the entire country that they're the class of the SEC and don't forget it.

We've got to think that Michigan State's Le'Veon Bell raised a ton of eyebrows in the Spartans Friday night victory over Boise State. In the first game of the post-Kirk Cousins era for Michigan State, the Spartans saw their offense turn the ball over four times, including three interceptions from junior quarterback Andrew Maxwell. Head coach Mark Dantonio and Michigan State's offensive coordinators then turned to Bell to carry the load, of which he proved beyond any doubt that he's more than capable of doing so. The junior running back

pumped out nearly 5-yards per carry (4.8 per) on a mind numbing 44 carries posting a 210-yard night to pair with his two touchdowns. While most of the country has been looking at his cross-conference counterpart, Wisconsin's Montee Ball (who also turned in a workman 120 yards on 32 carries), as the BIG 10's flag bearer in Heisman-related discussion, it was Le'Veon Bell who stepped out in week one and even earned himself Big Ten Offensive Co-Player of the Week. If this was a sign of things to come, Bell sure shook every BIG 10 foe from Ann Arbor to Iowa City.

Then there was West Virginia quarterback and now supposed Heisman front runner, of which there is no disputing, Geno Smith. The senior play maker was all over the Marshall Thundering Herd from start to finish in a dismantling 69-34 victory. Completing all but four of his 36-attempts, Smith passed for over three-hundred yards and four touchdowns. Over the next two weeks Smith's Mountaineers will have the opportunity to tune up on both James Madison and Maryland before they enter the rigors of their inaugural season in the BIG XII conference. Last week when we said that another BIG XII Heisman candidate could jump to the front, just like Robert Griffin III did a season ago, we forgot to include Geno Smith as that guy. From October 6th to November 17th, the Mountaineers and Geno Smith travel to Austin, Lubbock, and Stillwater. Sprinkled into their travel plans are meetings in Morgantown, WV with currently ranked Kansas State, TCU, and a matchup between potential Heisman candidates Smith and Landry Jones of Oklahoma. What does that Heisman resume look like on November 18th for Geno Smith is the very next question. Furthermore, as the hype builds in West Virginia, they've got to look at the road ahead and realize, all due respect, there are no trips to South Florida and Piscataway on a BIG XII schedule!

For more college football, follow us daily on twitter!
Posted by Lynchy at Thursday, September 06, 2012 No comments: