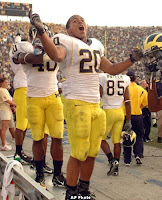 n. If you recall they got upset by App. State, whose other wins include, Lenoir Rhyne, Gardner Webb, and B. Arthur (so that last one was a joke, you can laugh now.) But since predicting victory against Notre Dame, which at the time was as good of a bet as Britney Spears losing her childrens custody battle, Michigan is 4-0 with wins against Notre Dame and Penn State, and Hart is only 24 yards away from 1,000 in just 7 games. The bonus for Hart is that he has the opportunity for two huge "statement" games at the end of the year, on the road at Wisconsin, and in the big house against Ohio State. Michigan could complete the comeback of all combacks by winning out and taking the BIG TEN Title. As far as running backs go, Hart is the elite, he won't be without competition though, in alot of voters minds, Arkansas RB Darren McFadden is still the most electric player in the college game. Watch for Hart to tear up second half of the season, he's a big-time back, in a big-time conferance, whose got something to prove.
Tim Tebow - QB Florida
The young gator is making a huge impact in only his second year at quarterback, and first full-year at quarterback for the boys from Gainesville. With back-to-back losses 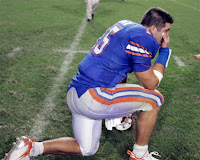 in the last two weeks Tebows Heisman dreams have stalled slightly, but expect Florida to bounce back in the coming weeks with road games against Kentucky & Georgia, they have an opportunity to pump up Tebow and put some quality wins back on their resume. #15's statement game came on the road at Mississippi with a dominating performance that included 2 Passing Touchdowns on 261 yards through the air, and 2 rushing touchdowns with 166 yards on the ground, that my friends, is Vick like. Like Hart, Tebow benefits from Quarterbacks who are running right into walls, JDB has all but excluded himself from contention with the liklihood that he may sit out with a broken finger, and having a saturday night that he wouldn't mind forgetting (4 picks & a HUGE upset) , and Andre Woodson's struggles at South Carolina this past weekend as well. small disclamier : I refuse to recognize Hawaii Quarterback Colt Brennan, 5 picks against Idaho = not impressive)
Matt Ryan - QB Boston College
If you know me, you know there was no way I was leaving this guy off half-way top 3 candidates. Boston Colleg

e seems to have lined up their schedule perfectly to help the Senior quarterback, he plays very well in his first three games of the season against conferance opponents, by the 3rd game he was on the map with a clinic put on by Ryan at Georgia Tech 30-44, 435 yards passing, and completing nearly 70% of passes that day. With 3 conference wins under their belt, the Eagles had 3 home games against non-conference teams, which would allow Ryan to pad his statistics even more, since I do believe stats prove a point in sports discussion here goes , over those three games Ryan through 8 Td's and only 2 pic's (both against Army,) and 872 yards passing, completing 83 of 125 passes thrown. I would say those padding numbers are sufficient. I admit, I'm a BC fan, I hope they win every game, but find a guy who will deny what Ryan has done so far, and he either goes to UMASS or is a cousin of Colt Brennan. Big games coming up for Ryan include @ South Bend, @ Blacksburg, and at home against an extremely fast Florida State team, the first week in November.
Posted by Lynchy at Tuesday, October 09, 2007