So it is going to be you WABC out of New York, really? Your going to be the ones to show America that we can forget, as long as the money train is lining our pockets right? Don Imus will soon be back on the airwaves, months after being fired amidst a swarm of bad publicity due to racist and ignormant remarks he felt he could make on national radio. Congratulations WABC, you officially have no spine and for that I'm taking the Scarlet Knights to knock off #2 in the country, cinderella story, University of South Florida Bulls. It's up to YOU, Rutgers Football team to make the news of you upsetting USF and show that your school should be a bigger story than Don Imus. He wouldn't dare say a word about Ray Rice, and I guarantee that. With

that said, here are my limited picks for week 8 in College Football:

USF is ranked ahead of every team in the college football rich state of Florida. Not the Seminoles, Gators, or Hurricanes, its the Bulls. There is actually no logical reason why Rutgers should win this Big East showdown. South Florida has beaten West Virginia, Auburn and a bunch of scrub teams and are headed toward a BCS bowl birth, while Rutgers was vastly overrated to begin the season with and lost the only two games against quality opponents, Cinncinatti & Maryland. So why am I picking Rutgers in this one? Becaues I hate Don Imus, and for that alone I'll cheer for Rutgers. Oh, and they are playing in Piscataway and we saw last year how rabid their crowd can get during a primetime game, god I'm hoping or at least one appearence by Tony Soprano. Don't Stop Believing. Rutgers +3.5

Is LSU still hungover from the huge game last week with #7 Kentucky? The answer, an emphatic NO. LSU will be more hungry than ever returning to the Bayou after losing their #1 ranking and possibly a shot at the National Title. After back to back brusing battles with Florida and the Wildcats I fear Auburn's shot at leaving with their dignity intact. This is the type of game where LSU settles down goes back to their winning ways of 2 touchdowns or more and allowing their opponents to measly offensive outputs. LSU is giving Auburn 11.5 points, and I think this game will be decided by more than two touchdowns. Bayou Bengals -11.5

So you actually think LSU is completely out of the National Championship hunt?

Florida loses at LSU, LSU loses at Kentucky, so that means what? NOTHING, Tim Teabow v. Andre Woodson, this one is going to be a classic. SEC style matchup, slugfest is the first word that comes to mind. So Florida wins this game, and what does that prove? I hate to harp on it, but I'm going to because South Carolina's soul loss was at home against LSU, their big win against Kentucky and they have another opportunity against Florida on 11/10. LSU will have 1 loss, SC could end up with 2 losses, Kentucky would have two losses, and Florida already has 2 losses. So we are back where we started. LSU is tops and everyone else is looking up. CHOMP CHOMP! Gators roll. Gators +7

So this is odd, Miami & Florida State are both unranked, and are a combined 8-5. Neither of them have a real shot at winning the ACC with 2 conference losses already a piece. Florida St. does have a top 25 win against Alabama and Miami against Texas A&M. This is probab 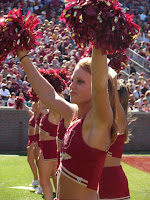 ly one of the first years in a long time where the game didn't matter at all, and no one actually paid attention to it. I can't remember what the line is , because like the rest of America, I'm not touching this game. I think the line was Florida St. giving 3.5 so Miami. Miami +3.5

So Pitino V. Calhoun . . . wrong sport, my bad. Like I've been preaching to anyone who whould listen, the

Big East is completely over rated, with the only exception being South Florida because they actually have a quality win against an SEC team. Louisville's defense would get shredded by 30% of High School defenses throughout the south, and that's no joke. West Virginia was over rated to start the season, and don't talk about Steve Slaton or Pat White, please, As for Rutgers, I plead the fifth its their week, F*ck Imus. Back to the game, I really want UCONN to pull off this upset, just to prove the point at how soft Louisville and the rest of the Big East is. Plus this would be a HUGE win for UCONN's football program. So I'm going with my gut, supposed to be shitty weather, Stoors will be a-rocking. UCONN +4.5
Posted by Lynchy at Wednesday, October 17, 2007