This has less to do with my hatred for pinstripes than it has to do with my respect for one of the greatest managers in baseball history, Joseph Paul Torre. The New York native bleed Yankee blue for the past 12 years, that was, until Thursday, when Yankee turncoat and #1 Scumbag, Randy Levine along with other members of the Evil Empire determined that the

best way to part ways with Joe Torre was to low-ball him and insult a man who has taken you to 12 consecutive post seasons, they oughta be embarrassed. To top it all off, #1 Scumbag comes out and proclaim that, I quote "We wanted Joe back, It was his decision and its time that the Yankee organization move along" or some bullshit to that extent. The turn of events has me more fired up than when I found out HBO was releasing the final episodes of The Sopranos in Box Set format along with the other seasons, so to try and squeeze every penny out of the fans who have already purchased every single season of the f'n show on dvd already and have to wait to buy the final episodes in a year or spend an rediculous amount of money on the seasons you already bought for $80 bucks a wack, but I digress. I'm going to rant for a couple minutes here and like I always tell you, there is that small black (x) in the top right hand corner of your browser, feel free to use it if you'd like:

1. You do not threaten a man's job when he is in the midst of a divisonal playoff series in which his team is already down 2-0. He's been to the mountain top 4 times, and to the classic 6 times, I think he knows what he is doing.

2. Randy Levine is a piece of sh*t. It was his idea to cut Joe Torre's salary and give him an incentive laiden contract in order to motivate him? WRONG, he determined this way the Yankees could save face and obviously Torre is an intelligent man and he'll be able to see exactly what the Yanks are doing and decline the contract. Well Randy, YOU AIN'T FOOLING ANYONE.

3. Jorge, Mariano, and Andy . . . Walk. Truth is the Yanks don't respect you, you warned them Mariano, and they said "he'll take the money, were not worried about it." Take the next flight down to BWI. The Orioles could use a Manager, #2 Starter, Catcher to split time & DH, and Mariano has gas left in the tank. Peter Angelos has just as much money to waste as the next guy, and you'll get to go back to THE STADIUM at least 9 Times a season to show Tweedle Dum and Tweedle Dick (Steinbrenner Brothers) just who they were screwing with. Plus my dad, a long time Oriole fan, would have something more to cheer about, rather than Eric Bedard and a washed up Miggy Tejada.

4. Brian Cashman, your the next to go and you have got to know that your days are numbered. What's it like to be a turncoat? Looking across the room staring at Joe Torre knowing exactly what everyone else in the room is doing, you must have felt like Henry Hill in the courtroom looking at Paulie & Jimmy. Now you got egg noodles and ketchup! 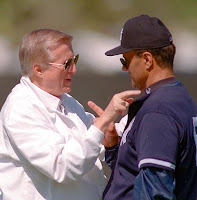 5. A $200 Million dollar payroll entitles you to shit. Especially when you spend the money on the wrong groceries. Just because you shop at Whole Foods and pay an extra $80 bucks than you would at Price Chopper doesn't mean your eating gourmet. You shouldn't expect to win a ring because you overpaid for shitty food. They rarely have homegrown talent as of late, they never trade for role players, bench guys who can help you win. The most expensive, free-agent talent, thats what the Yankees go out and get, but It ain't Torre's name on the bottom of those checks, it's Steinbrenner.

Joe, I applaud you, for standing up and knowing when you don't need to put up with all that comes with "the yankee way." I don't want you sporting a Sox cap, because I think Terry Francona is a very fine manager and that would mean he wouldn't be around, but if you were, I'd feel pretty good about it.