Beckett walks to the mound, mows down Taveras, Matsui, and Holliday by way of the K. Sox get Yaz to announce the Boston starting lineup and he doesn't even butcher Jacobi Ellsburys name. As quickly as Jeff Francis finishes his warm up tosses, Pedroia belts one right through his wheelhouse over the monster, 1-0. Sox get to Francis in the first, Rox lo 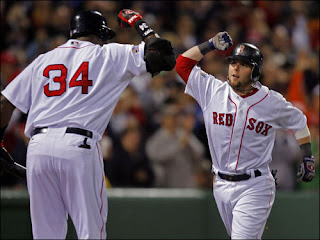 oking miserable down 3-0. If you were still curious about Colorado being rusty after an eight day layoff, you weren't after the first inning. Rockies come out in the second inning, after a Todd Helton wiff, Atkins puts a double off the monster followed by a 2-out double from rookie phenom Troy Tulowitzski, Rox on the board. Beckett gets out of the 2nd and Boston is looking good up 3-1. Sox come back and add another one in the bottom half of the frame. Colorado has no shot at this point, it's raining and Beckett is dealing, and when I say dealing, I mean seven innings, 6 hits, one run, and 9 strikeouts. Oh Yea, Colorado can't get that deer in the headlights look off their face, and the Sox add another nine runs in the next three innings. Boston rolls to a 13-1 victory and the reason it takes only one paragraph to describe is because thats how quickly game 1 of the 2007 World Series was over. The Red Sox have three former World Series MVP's on their roster in Beckett 03, Schilling 01, and Ramirez 04. Beckett has faced two Cy Young candidates in three games before the World Series, dominated both Lackey & Sabathia twice, and last night reminded Colorado that Jeff Francis is no World Series Ace. 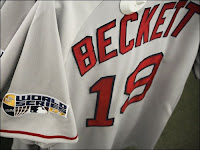 Buy up your Beckett jersey, his coming out party is in full affect and has officially replaced Pedro as king of the mound in this town.