So of my massive list of readers (10) I recieved not just 1 or 2 e-mails looking for some Cowboys talk, I recieved 3. I'm well aware that the other 7 will cringe and hit the red (x) button on the top right hand corner but in the immortal words of Chris Tucker in Friday, I DON'T GIVE A F******CCK. So that's my disclaimer, you have two choices (x) if you want, or read

on my friends.
that may also entice you, no? - - - - - >
So after week 2, when I realized that it took me to long to realize that Miami sucks, I decided I'm going back to one of my classic gambling addiction rules, no betting on a team you want to win, for fan sake. With that said, screw the line, and screw Tony Romo's 5 interceptions, America's Team is 5-0 and I'll take it. Before last night Dallas was out of this world, flying high, scoring touchdowns at will, and also making all of us question, are they for real? The answer? YES, they are for real, they are for real undefeated heading into week 6 against the New England Patriots and every fan who didn't cheer for one guy before Drew Bledsoe. The difference between me cheering for the Cowboys and the majority of Patriots fans is, I was 7 when I made that decision, not 18. Touche.

What do I love about the 2007 Dallas Cowboys? For starters, I love that they are WINNING, honestly, I've waited like more than 12 years to see this friggin team start winning again, and being talked about for how they play, and less about what they do off the field. I didn't agree with the Wade Phillips

hire, in part because he looks like a football coach about as much as I do, but in Jerry I trust. (and Jason Garrett is standing right there so that when Wade screws up, he can take his place, I always felt comfortable when he was on the side line, and because that meant Aikman was still on the field) Well he's done a pretty good job, giving Garrett the opportunity to call plays, and we know how thats worked out, just watch the 9 points they scored in 40 seconds last night, in a game they shouldn't have won because of how poorly they played the remainder of the game.
Nick Folk for Rookie of the Year, make it happen. For all the Romo bashing that is going on because he played poorly in one game, good, because here is a guy who clearly doesn't let things bother him, not every guy can come back from costing his team the shot at winning a playoff game last year. So before we claim Romo as the most over rated quaterback, lets go back to 2001, Peyton Manning's second year as a starter, Manning got smacked by the 49ers, throwing 1 touchdow

n & 4 Interceptions with a Passer Rating of 56.8, people have bad games, thats all i'm saying, believe it or not, quaterbacks in their second year as a starter do make mistakes. Aside from how bad those interceptions looked, he has had a pretty good year thus far, I don't expect him to turn into David Carr the second half of the year, and like Kanye West says, I hate white people, oops wrong quote, i meant " that, that don't kill me, only makes me stronger" in Romo's case a 25-24 Victory over the Bills on the foot of rookie kicker Nick Folk.
It isn't just TR though (Yes, I just nicknamed him) his wide reciever is finally growing up and playing like the reciever he really is, big & physical, not giving anyone sh*t, and an ability to beat any DB in the league, on any given day. Despite what Sal Palantonio thinks, TO & Randy Moss are definately not overated recievers, and this year should prove that. 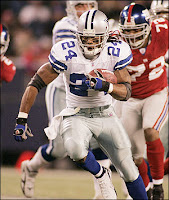 Romo & Owens have seemed to form an interesting bond, they both give credit to the other when needed, and It has to be a sign of the apocolypse when you see TO talking Romo through those picks and reminding him the game isn't over, he used to rip into McNabb on the sideline whenever he'd do that, that's probably because McNabb is black though, right Donovan?
Patrick Crayton has filled in very nice for the injured Terry Glenn, and against St. Louis was flat out dominate. Speaking of dominance, have you ever felt more comfortable since Emmitt Smith when your handing the ball off to Marion Barber? This guy is a machine, he doesn't stop his motor and those screen passes that he gets, he weaves through traffic with a purpose. Along with the performance Jason Witten has put in this year, it has the Cowboys offense rolling, and before last week, they had the highest scoring offense in the league. With Newman back in his second week you should see a significant improvement on defense the undersized Reeves allowed Plaxico to explot the Dallas secondary in week one, and with Randy Moss coming to town, it is very important you get a solid cover corner like Newman back.

Which brings us to, my most anticipated game since the schedule came out. I had planned on spending this day in the confines of Texas Stadium with a couple of my buddies, my first trip to Dallas, playing the Pats, it would have been great. But then one of my buddies pulled the rug out from under the trip and opted to go to a wedding, but i'm not mad (that mad) So I'll be forced to watch it in New England with band wagon Patriots fans all around me, glorious right? WRONG. My predictions for the game? New England has the better team, I can admit that, does it mean I am giving defeat already, HELL NO. If there is one thing I've learned from my years of watching football, both College and Professional, anyone can win, on any given day. GO COWBOYS!
Posted by Lynchy at Tuesday, October 09, 2007