"For the second time in four years, the Red Sox are going to the World Series, can you believe it?" - Joe Castiglione
In 2004 the world witnessed the first team to come back down 3-0 and win a pennant, the look in the eyes of every New York Yankee player or fan, knew the series was over when Boston tied it up in game 6. Tonight Cleveland had that same exact look in their eyes, well lets see if your right, Indians first basement Ryan Garko, go try some of the Sox champagne, see if it tastes the same on the opponents field. If not for the ass whipping Belicheck put on Miami on Sunday, the Red Sox winning tonight would have been the biggest lock of the weekend. Some quick numbers for you:
30-5: The Red Sox outscored the Indians 30-5 in the final three games of the series
.500 : Kevin Youkilis batting average during the 7 game ALCS
0 : Number of World Series the New York Yankees have won in the past 7 years
3.86 : Paul Byrd's ERA for the three seasons between 2002-2005 which he was on HGH
10 : Cover charge at Platinum Premier (sorry, I laughed out loud when I wrote that)
Back to Normalcy
So a few days back, after the Colorado Rockies punched their ticket to the Fall Classic, I decided to introduce you to the National League Champion, to get you used to seeing these guys get up at bat, on the national stage. Today, I'm going to RE-introduce you to some of my friends, okay okay, so they aren't my friends, but I pay more attention to them than I do to anyone at work, or at home for that matter, so here goes . . . . . Wait, I have a phone call. I'll allow you to read the conversation.
Lynchy : "Hello?"

Dane Cook: "I got some good news for you Mr. Lynch"
Lynchy: "Yes?"
Dane Cook: "Are you ready?"
Lynchy: "Move along moron, I'm ready"
Dane Cook: "THERE'S ONLY ONE OCTOBER"
silence . . . . . . . . . . . . . .
Dane Cook: "Sir, are you there?"
Lynchy: "Yes, but I'm trying to determine which would work quicker, noose or bottle of advil"
I'm being serious, if I have to hear him say that one more time, I'm going to look into how you add a second October.
So here's a few to remember . .
Terry Francona Manager
Francona has been routinely criticized for sticking with his players longer than he should, wether t 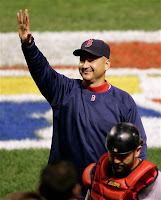 hey are slumping at the plate, walking batters, or if their last name is Gagne, Francona is loyal to them. This, I have no problem with he is the only manager to bring this ball club a World Series victory over the past 90 years, so I'll take his word for it. He stuck with Pedroia when everyone from Bangor to Hartford was calling for Alex Cora after the first month of the season, since then, Pedroia has become the Rookie of the Year in the American League and a key table setter in the postseason for the BoSox. He believed enough in Tim Wakefield to start game 4 of the ALCS and never waivered in his decision, when the rest of America felt like Beckett should be pitching Game 4, Francona knew what type of team he had and win or lose, they'd come out and fight the next night with Beckett fully rested. Bottom line is, Terry knows what he is doing, he's been there before.
Josh Beckett Ace 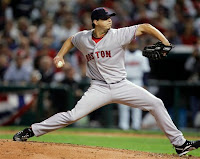 Career post season ERA is 1.78 in 8 starts. This year, Beckett has been asolutely lights out dominate, boasting a rediculous 26 strikeouts to 1 walk. After polishing off the Yankees in 2003 we said he was a good young pitcher, when he starts Game 1 on wednesday night, four years later, we'll say he's the best pitcher in the game. This postseason Beckett had the opportunity to not only face C.C. Sabathia, leading candidate for the Cy Young, once but twice. Both times, Beckett won the battle, good luck Jeff Francis.

Jacoby Ellsbury catalyst
I know that it was only 2 games, but Ellsbury proved to be the spark plug that the Sox needed to turn the line up over to the 1 & 2 hitters. The Red Sox september call up played in 33 regular season games and hit .353 in those games. The future every day center fielder for Boston is making his presense felt, so much so that Coco Crisp had to remove is braids once he realized Ellsbury was replacing him in the two most critical games the Red Sox would play all year. Don't count Coco out for good though, Tito has a way of making sure his guys are all happy.
J.D. Drew $77 Million Dollar Man
(is it possible you can erase an entire season of disappointment in one night?)
If it is possible, Drew might just have done that during game 2 of the ALCS. Opening the first inning with a grand slam is a pretty good way to win your way into the hearts of every Sox fan. Drew is going to be critical in the World Series, if he can continue to find his bat every game you'll quickly see the production from the lower half of the lineup significantly increase, the way Ellsbury gets on base, count on Drew to score some runs in this series.
Fenway Park America's most beloved ballpark
This ain't the friendly confines of Wrigley Field, and although the WS will attract more wealthy business men in the Boston area than it will true die-hard Sox fans, Fenway has its difficulties for opposing teams. The outfield isn't as friendly to fielders who don't play in it at least a few times a year, the fans are more on top of you than any other ballpark in the country, and global warming has affected New England way more than Colorado so weather wise, expect anything. Fenway will be rocking come Wednesday night, and the Rockies better be prepared.
Coffee is wearing off, I have two days to blog and countless podcasts and magazines to review so they'll be more to follow. 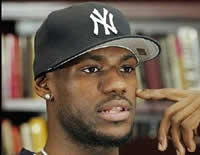 ONE MORE NOTE: Lebron, how could you rock a Yankees cap at an Indians game? I think that we need to develop a curse for Cleveland to have. Coming from a fan of one of the most suffering curses ever made, The Curse of the Bambino, I think we'll call it "The Curse of the Runner-up" Because thats what Lebron was this year, and thats what the Indians were this year. Thanks King James.
Posted by Lynchy at Monday, October 22, 2007

Lynchy what do you feel about Tom Brady the quarterback of all quarterbacks being caught in New York with a yankees cap on as well? Sure it was one of the stupidest appareal moves he could have done, but do you hate him for it? Frankly I think he can do anything because he is dating the hottest girl in the world. Plus Brady is kicking ass in the 07-08 season with a record of 6-0, but do you see Tom supporting the Red Sox or Celtics by going to an important post season game...no. My point is who really cares what hat someone wears to a professional game. Lebron's fashion designer probably thought it went well with his eyes or some gay shit like that. All that counts is that he performs at his job on the basketball court or Brady on the football field. Lebron does perform on the court by single handedly beating the NBA east (with a little opps in the finals)...plus the guy makes 30 million dollars a year do you think he gives a damn what people think about his hat...He is King James he'll do what he wants.