Come GET SOME Thursday

From Virginia to Colorado, the sports world witnessed how Boston gets it done last night. The state of Virginia was still in shock when they woke up this morning, Chicago fans watched their guy get pummeled on the ice, and Colorado ordered 10,000 boxes of white towels or some other gimic to help them attract fans who want to see Boston celebrate Sunday night.

Rockies were rusty in game 1, in game two, they were flat out dominated. Schilling did, what Schilling does in the playoffs. After the 2-1 pitchers duel won by Boston last night, I was thinking about that Ford commercial that Schilling did when he was signed b 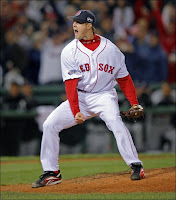 y Boston at the end of the 2003 season, how he was on his way to Boston to help them break an 86 year old curse. Well Curt, If you never pitch in a Red Sox uniform again, you did, what you set out to do, and so much more. You may rip the guy because he always has something to say, because you think he faked the bloody sock, but you can't deny he is a champion, in every sense possible. He'll have collected his 3rd World Series ring when its all said and done, he pitched along side Randy Johnson for the 1st one, Pedro Martniez for the 2nd one, and now Josh Beckett, the games greatest postseason weapon, I'm sure those three guys don't mind having a #2 that strong. BUT TO THE GAME, Mike Lowell, wrapped in the winning run and the Sox never looked back, Okajima looked like he did back in June & July striking out four batters and getting six outs, then handed the ball to the door closer, slammer, Pap was lights out, even shutting down a rally after walking Matt Holliday he proceeded to pick him off first base two pitches later. TO COLORADO.

What do you want me to say? It was pouring rain out, Hokies faithful were going crazy, offensive line couldn't block, the recievers couldn't catch and with four mintues left in the ball game it looked like for the fourth straight week the #2 ranked team in the country would fall from grace. Southern California, California, South Florida, and it looked like Boston College would be

the next victim. That is until Matt Ryan realized that he was the leading contender in the Heisman Trophy race, his team controlled their own fate in the hunt for an ACC Title, and oh yea, THEY ARE THE NUMBER 2 TEAM IN THE COUNTRY, YOU NEED TO START ACTING LIKE IT. Ryan proceded to drive 92 yards down the field and place a tear drop touchdown pass on the sideline slicing the lead to 10-7 Va. Tech. Boston College recovered an onside kick, and Ryan flexed his Heisman muscles one more time putting on a clinic which ended with a Andre Callender touchdown in the back of the endzone w/ 11 seconds remaining on the clock. Then proceeded to pull a Willie Beamen like throwup clinic on the sideline, impressive. I didn't even shoot out 5,000 text messages after the victory, I took it in stride, until this morning when everyone got the Matt Ryeisman text on my way to work. BOO-YAH! Take your lunch boxes and step off Hokies.

I don't much about Hockey, but I do know that I'd watch it a whole lot more if there was more blood battles like the one I witnessed on Sportscenter this morning. Bruins defensemen and captain, Zdeno Chara, put the hurting on this Blackhawk, bad. The guy got his

bell absolutely rung and he's got no one else to but himself, you don't fight a 6'9", 255lb defensemen whose main job is to punish the opposition. Completely bloodied up, all 10 fans at the game last night gave the guy a round of applause, for getting his ass kicked. Two things I need to mention about this game besides the fact that I was right, no one was even

at the game, but the first is Bruins netminder Tim Thomas, I recently found out hails from Flint, Michigan home of Mateen Cleeves & Mo Peterson, this automatically makes him my favorite goalie in the world, and secondly I wish every sport was like hockey in the sense that if you really got in a heated debate, rather than a 15 yard penatly or a technical foul and a turnover, the refs just let guys go in the middle of the field and duke it out till it got ugly. GO BRUINS! Oh yea, the game . . 2006 Masterton Trophy winner (still don't know what that is for, but I thnk its a rookie of the year award) Phil Kessel dropped in two goals in the Bruins 3-1 win to improve their record to 3-0 at home and 9-6 in the Northeast Division.
Posted by Lynchy at Thursday, October 25, 2007

The Masterson Award is awarded for perseverance, sportsmanship and dedication to hockey.