So yesterday after sending my latest blog entry about America's Team to my friends and family, I recieved more response than I have from any of my other blogs. I've seemed to have touched a nerve among Patriot fans, and given Cowboys fans a little more to cheer about, and oh yea, my brother, a Bills fan, well he felt the need to chime in as well. Since the majority of you responded to me directly I'll give you all what those responses sounded like: my own interpretation
From the REAL New England Patriot Fans:
" Blah Blah Blah, Steve Grogan, Blah Blah Blah, Tony Eason, Blah Blah Blah, 85' Season, Blah Blah Blah, Ben Coates, Blah Blah Blah"

My Response: Listen, I get it, some of you are real fans who have followed the team since you were a little kid, and when you went to college, or moved to a different part of the country, you still cheered for your hometown team, congrats, what do you want a trophy? My attack is on those fans who merely cheer for a team because they won a few rings, or because they have a sick obsession with the quaterback because in some lithium and scotch fueled dream they felt that he might actually choose them over the hottest woman on the planet. I'm a Cowboys fan, since birth, thanks to my uncle Jimmy & my father, and because of that, I can't stand bandwagon Cowboys fans either, just like I can't stand bandwagon Patriot fans, and you real fans, you shouldn't either, because you've been through some pretty shitty seasons, just like I have with the Boys'. BELIEVE THAT.

Side Note: One true Pats fan, in response to my buddies ditching me and a trip to Big D, to go to a wedding had this to say, "Just tell your friend that 50% of marriages end in divorce, so you'll probably get another chance to go to his wedding" - what is this world coming to?
From the Fake New England Patriot fans a.k.a. the posers:
"oh we are so good, I love sideline video cameras"
My Response: I'm not going to continue to say it, you know where I stand. This is your trial period, you don't get points for cheering for a team that is winning already, stick it out through a losing period, and every team has them so don't be naive to think they don't, or won't. I'm talking, No sideline cameras, no pro-bowl/all-world Quarterback, and no WINS. Then you get credit, and so you know, it was my buddy Roche, a true Pats fan who developed that rule. Give credit, where it's due.
From my Brethern otherwise known as fellow Cowboys fans:
"You are pretty much a genious, thanks for shouting us out"
My Response: I appreciate the adoration, and respect. But let's hold off on crowning us top of the food chain, we need to

be realistic with this, it's the NFC which could be considered as the JV of the NFL. To many acronyms in that last sentence, the broken down version, you have to beat the best, to be the best. As much as I would love, and expect the Cowboys to appear in the next Super Bowl, I don't know if I could handle a Super Bowl loss, especially not to Peyton Manning, Ben Rothelsibergeter, or Tom B-B-B-rady. Don't get me wrong, I'm not waving the white flag, I just want to see some big wins that I can gloat about, if you know me, I'm pretty good at that. With all that said, I only have one question for you . . . . .HOW BOUT DEM' COWBOYS?!?!?!

Last & definately least, Buffalo Bills fans:
"waaa waaa waaa, they shouldn't have won, waa waa, waaa, TRENT EDWARDS SUCKS"
My Response: I watched that entire game Monday night and despite 5 interceptions, and 6 total turnovers you still couldn't win the game. The most popular jersey in the crowd was a player who wasn't even on your team anymore, Drew Bledsoe, and only played on your team for a few years. I know you wanted that win badly because getting embarrassed in two Super Bowls by 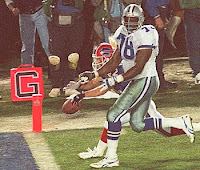 DA BOYS with a combined score of 82-20 is pretty pathetic. But hey, look on the brightside, at least Leon Lett didnt' score that touchdown on you and set the all time points record in a Super Bowl. So please, give me a break, take satisfaction in the fact that you ALMOST won, it will get you through the night.