The deadline has passed, teams are sorting themselves out, and this is when baseball gets fun. Give yourself a few minutes off from Olympic badminton and checkout how we're Hitting The Bases . . .

He's hitting .350, already pounded 18 homers as of Monday night, ripped 31 bags in 79 games, and he can't even legally drink for another eight days! He is Angels phenom center-fielder, 20-year old Mike Trout. The amazing season of Mike Trout could give the Angels both the 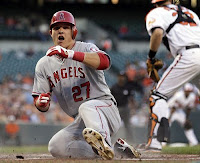 American League Rookie of the Year and the American League MVP, in the same player. Even more impressive is the company that a feat like that would place Trout in, just Boston's Fred Lynn in 1975 and former Mariner and future Hall of Famer Ichiro Suzuki in 2001 have accomplished it. Just as impressive is what would happen if Mike Trout were able to hold on and win the American League batting title. Hitting nearly .025 better than any other American League player, Trout is staring at becoming the third youngest player in the history of the game to win the batting title. Ahead of him? Al Kaline and Ty Cobb. However, could it be that the same man who is so lethal with the lumber and in the field has another part of his game even more valuable? On the base paths Trout is flat out dominating, being the Major League leader in both stolen bases (31) and runs scored (80)!

They've got the best team earned run average in 'The League.' Not one but two front-line starters with sub 2.80 ERA's, and one hell of a developing following / bandwagon. Currently boasting a major league best sixty-one wins, they're the surprise Washington Nationals. When it comes to the 'Nats, it's all about the pitching. 26-Year old Jordan Zimmerman has been dominant in

July. Over six starts, Zimmerman has posted a 4-0 mark allowing just four earned runs over 37 innings, pretty standard for the National League's third lowest ERA (2.28) amongst starters. Left-hander Gio Gonzalez is in the midst of a career year with 13 wins over 21 starts to go along with his 137 strikeouts, 5th most in the NL. Then we get to the one everyone wants to talk about, Stephen Strasburg. In his first full season as a starter, Strasburg has not only remained healthy (knock on wood), but delivered (154 K's). Till this point. Both the Phillies and Braves have gotten to Strasburg as of late and at 130 innings, it's time the Nationals start to seriously make some decisions. When current staff ace Jordan Zimmerman was coming off the same Tommy John surgery which Strasburg is returning from, the Nationals let him get to closer to 160 innings before shutting it down. However, the Nationals weren't in the midst of both the pennant picture or a dream season!

9-1 Over their last ten games. Led by a dominant 26-year old righty, they are only club in baseball who has used just five starters past the mid-way point. Since mid-July their lineup has been without the National League's toughest out, yet they're still sitting atop and surging ahead of the NL Central. They are 'The Class of the Midwest,' the Cincinnati Reds.

Mike Leake, Bronson Arroyo, Mat Latos, Homer Bailey, and staff ace Johnny Cueto have each made all of their starts, and they've looked strong. With the majors best team ERA, the Reds have let up just 344 earned runs. Back to Johnny Cueto, the twenty-six year old Dominican has allowed fewer than forty earned runs in 21 starts thus far! Even more impressive for the Reds is that in 15 games without All-Star first baseman Joey Votto, Cincinnati is 12-3! Jay Bruce and Brandon Phillips along with third baseman Todd Frazier are leading the Reds offense in his absence. Just like the Nationals, but better, the Reds staff has very little holes and that's what are going to carry this team into the postseason.

It is, today, a game changing idea coming to fruition. Clubs that would have been in a fire-sale as we approached the July 31st trade deadline, are holding out. Why? It's the additional Wild Card Playoff Ticket in each league. Only the Phillies, Marlins, and Cubs seemed to want to wave the white flag heading into this weekend. Six or seven teams in the American League including, four in the hotly contested East, are

just seperated by five games for the second Wild Card seed. Then there is a team like the Dodgers in the National League who in previous years would have been looking at probably three or four teams battling them out for one spot and thought twice about giving up young prospects to add rentals. However, in this season they move forward and add outfielder Shane Victorino from Philadelphia and infielder Hanley Ramirez. Even a team such as St. Louis who in a normal year with division opponents Pittsburgh and Cincinnati having the terrific seasons as they are, is still in this thing, hence the reason they added bullpen help through Miami on deadline Tuesday. Say what you want about Selig, but he did an outstanding job adding a twist that only improves the league.

Another trade deadline has come and gone, and while last week his team parted ways with a veteran, once in a generation outfielder, he remains in the greater northwest with his team thirteen and a half games out of first place. The Major League leader in strikeouts and a 2.79 ERA, all while being just two outs away from pitching more innings than anyone in baseball, he's perennial All-Star, Mariner ace Felix Hernandez. The Mariners have finished in last place for two straight years and with the Rangers and Angels prepared to duke it out for the division, it looks like the M's will finish last yet again. King Felix is one the most dominant right-handed pitchers in

baseball, and has been since 2005, but does the rest of the country know that? With the Mariners unable to return to successes they reached in the early 2000's, it's time to ask what they're planning on doing exactly? With Hernandez being able to prove he can be consistently dominant over his entire career, and he's only 26, imagine the type of package the Mariners could ask for! The Mariners control Hernandez for another two seasons which will cost them over $40-million dollars. While he has a limited no-trade clause, you don't think there is more than one AL power broker who wouldn't extend him for another record-breaking contract extension that the Mariners simply cannot commit to? Furthermore, there are a ton of miles on Hernandez, and he's only another year away from teams being extremely concerned about that small note, concerned enough to balk at a mega-deal the Mariners would probably be looking for. Move The King.

For more LynchyRightNow, hit us on Twitter!
Posted by Lynchy at Tuesday, July 31, 2012 No comments:

NCAA president Mark Emmert and the NCAA executive board would have you and I believe that the landmark decision delivered to the now infamous football program at Pennsylvania State University has a much deeper and lasting impact on the nature of collegiate football, and on a deeper level, collegiate athletics.

Applaud Emmert, for he made no mistake addressing what he and the executive board believed to be the root cause behind a university displaying such a lack of institutional control that they knowingly, and willingly, failed to protect innocent young people of whom were victims to no fault of their own. Emmert's remarks made it clear that the culture of 'hero-worship,' and a 'winning-at-all-costs' attitude, coupled by a university losing sight of what is most important within their grounds, all resulted in the most unprecedented and egregious failures of human decency and 'cover-up' of those failures of human decency, in the history of the NCAA.

That was the essence from what we heard on July 23rd, 2012 addressed to Penn State University. It wasn't the $60 million dollar penalty, equivalent to the average annual revenue of the football program. It

wasn't the four-year ban on postseason play, designed to assist the program in finding the meaning of collegiate athletics. It wasn't the loss of scholarships, preventing the school from building up a winning program sooner than later. And it certainly wasn't the vacating of some 100+ victories of the once 'Demi-God' of Happy Valley, Joe Paterno. It was to make the simple yet effective statement that at some point over the past 15-years, Penn State's ability to judge right from wrong was lost on their blind loyalty to a 'Hero' in their eyes and the arena in which that 'Hero' was ever on display. It was to acknowledge that at Penn State, and possibly, no definitely, at other institutions of higher learning, we've lost our way on what is most important and if we don't acknowledge it now, what other unprecedented things could follow?

Yes, there is a hint irony involved here. Who stands to benefit most from the revenue brought in by major college football super-conferences, post-season play, and a twenty-four hour news cycle on what happened lately in college football? The NCAA. Who chose now as the time, with the worlds eyes on them, to deliver a punishment so severe the program may never be able to recover, unlike their 'less than quick' movements made on

Ohio State and USC in recent years? The NCAA. Who benefits most from erasing victories which would leave Joe Paterno virtually erased from the conversation of records? The NCAA. However, ask yourselves, are you so cynical to believe that there is no way the NCAA has learned something from this situation in Happy Valley? Could they possibly have had discussions as to what can be done at other institutions where a schools administrators and coaches could show similar lack of control? Are there administrators across the country that woke up this morning and understood the words of the NCAA executive board echoed by president Mark Emmert, and will dedicate their coming months to changing the atmosphere? Or, is there no way to stop the process which has created super-powerful football coaches based on the amount of money they bring into the university?

The NCAA might not always get it right, and you may want to wait and see what changes are actually made within college athletics, or more so college football, but their decision to level Penn State so hard was based on their understanding of what caused them to be so morally inept. This is a rare punishment, for a rare act that we hope would never, ever, happen again.