Well, not exactly chaos it is actually pretty typical as to what unfolded last night during the BCS Bowl Selection Show and I LOVE IT! What do you expect to happen when you have a post season determined by a voting method and not the actual play on the field? Do you think that a computer system & managers of the national league in major league baseball would have voted Colorado and Arizona into the championship series in their league? Do you think that NCAA head basketball coaches and a computer system would have put George Mason into the final four two years ago based on strength of schedule? Well they wouldn't, but they aren't given the opportunity to answer that for us, NCAA college football coaches are given that opportunity, and they have done a pretty good job if you ask me. BUT THAT IS WHERE IT STOPS, once you get past the title game with Ohio St. against LSU, the rest of the system is more w 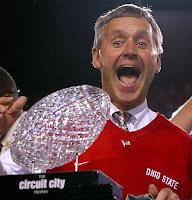 acky than Dick Vitale after a game winning 3-pointer. Let us start off with the title game:

LSU deserves to be there based on who they've played, how they've played, and of course HOW EVERYONE ELSE PLAYED. They are the SEC Champions, the same conference that is CLEARLY the best of the power NCAA Division 1 college football conferences. So stop it Georgia your plate is full enough with Hawaii. As for Ohio State, you did what West Virginia wished they could have done this week, and that is stay at home and not play another game. The Mountaineers had no business losing to Pitt, but we should have seen this coming, Michigan lost to Division 1-AA App. State, USC was hurt and lost to Stanford, is it that shocking that WV choked in this season of all seasons? Of course not. I'm going to go out on a limb on this one, and I'm sure I'll be the only one to, but that is why I'm doing it. Ohio State 42 LSU 40 triple OT.
Time to FIESTA, Oklahoma v. West Virginia. Winner of this game is like the guy who gets to date Cinderellas ugly stepsister. Oklahoma thinks they deserve a shot at the title after beating the previously ranked #1 Missouri Tigers, not only this past week but also earlier in the season and for the same reason we considered Missouri and Kansas frauds coming out of the BIG 12, undefeated for most of the season, we should consider Oklahoma fradualent. Bob Stoops, losses to Texas Tech 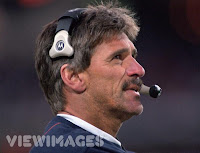 & Colorado don't exactly make you the best of the two loss teams so sit down. Ahhh and the previously mentioned Moutaineers, I've been waiting to take a shot at you and the BIG EAST for months, so here it comes. WHO DID YOU BEAT? If you had beaten Pitt and played for the National Championship it wouldn't have been that far fetched that you were one of the most over rated teams playing for a championship, EVER. South Florida was exposed, UCONN lost to Louisville before the refs helped them out, and Cincy is playing in the Bowl game to decide who gets papa johns pizza for a year? So I couldn't be happier you choked and coughed up your shot at a National Championship. Played at home, against Dave Wannstedt, in the biggest game you've played in, in years and you choked. NEWSFLASH a loss to Dave Wannstedt in a big game is about as embarrassing as you get. No limb climbing on this one Oklahoma 39 West Virginia 22
While it almost pains me to discuss a FedEx Orange bowl w/ out mentioning the Boston College Eagles, I must move on and remember Dennis Greens life lessons, they are who we thought they were, hello Champs Sports Bowl. TO THE GAME: Virginia Tech v. errrrr wha 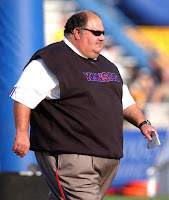 t? you mean Missouri didn't get in this game? Kansas did? I mean didn't Kansas and Missouri play each other two weeks ago and Missouri handle them on a neutral field? Oh, they did and didn't they end the regular season with the same record? Wait, has vegas placed a line on Kansas' coach, Mark Mangino getting out of South Beach w/ out giving Hulk Hogan is sunglasses back? Let's be serious here though, Virginia Tech you got manhandled by LSU 48-7, while it may be your only "real" blemish on your record its a HUGE blemish. You either play LSU for the National Title which no one could justify, or you get in over LSU which again NO ONE COULD JUSTIFY. You get credit for playing them in the regular season though because you could have scheduled Alcorn State as your non-conference road game and been a Matt Ryan comeback away from being undefeated. So Oranges are all your getting from me, tough break. Kansas come on, this is about money, you have no business being in a BCS Bowl Game. You played 1 solid football team, and lost to them. Virginia Tech 36 Kansas 10
Are you ready for a surprise fellas? My friends and I have discussed college football all year long, because quite frankly it is way more exciting than our desk jobs and in JD's case, school. One constant

theme is that I believe Colt Brennan, June Jones, and The Hawaii Rainbow Warriors ( that was seriously your name there for a while) are a joke. The only program to navigate through their season undefeated. Well, consider my pride swallowed. THEY AREN'T a joke and they are about to play in the most exciting of all the bowl games. Don't pass the SUGAR BOWL up, (like that pun, it was intended) Hawaii will face the Georgia Bulldogs, probably one of the hottest teams in the country, in the Sugar Bowl on New Years Day. The SEC powerhouse will fill the Superdome with fans, ATHENS TRAVELS TO NAWLINS, TRUST ME. BUT Hawaii actually played this past week unlike Ohio State and Georgia, and they beat a Pac-10 team in Washington, they weren't letting anyone off that Island with a win. Not only did they come back to win that game, but the previous week they knocked off 2006 miracle makers, Boise St. making me, a believer. June Jones is not a genious, and Colt Brennan will not win the Heisman, but if Mark Richt and the Georgia Bulldogs don't get up for this game, and put the title bid behind them, there will be alot of unhappy dawgs in Nawlins. YOU WANTED FORECASTING, YOU GOT IT . . . . . . . .
HAWAII 52 Georgia 49
Roses for the Big 10 . . . .UGH. Southern California lost to Stanford when they were decimated with injuries, and more people need to acknowledge that. There is only one team that I actually thought could be considered for the BCS Title Game over Ohio State and that was So. Cal but I'm not shocked they aren't in that game, they belong playing in the Rose Bowl an

d I'm kind of excited to watch them put on a clinic against Illinois, which I fully expect to happen. I'm not sure who the Rose Bowl committee is comprised of, but I'm guessing it has a bunch of old white guys who watch two conferences play football every week. Given the opportunity to grab pretty much any of the top teams in the country because of losing Ohio State (Big 10 Champs) to the BCS title game, and you go tradition over an actual game, not shocking. Illinois in the Rose Bowl is rediculous, I wanted to see Illinois v. Florida, Ron Zook against Gainesville, in the Capital One Bowl, but instead the Rose Bowl committee passes on EVERYONE ELSE WHO DESERVES A BCS BID. I know, I know, you can't take 3 teams from the same conference in the BCS Bowl Games, BUT YOU HAD THE FIRST PICK, you could have had Florida v. USC which would have been a GREAT GAME, you could have showcased Chase Daniels against USC, but you passed on all of that to watch USC role up another Big-10 team in a BCS Bowl Game. Awesome idea. USC 70 Illinois who cares

Spoons for your BOWLS:
Missouri deserves a shoutout if you haven't noticed the theme yet, they got SCREWED. To cheer for Chase Daniels just tune into the non-BCS game, The Cotton Bowl where they will play Arkansas and fellow Heisman candidate, Darren McFadden.
_ _ _ _ _ _ _ _ _ _ _
The SEC has it in for the Big-10 and I fear for them. Florida will embarass Michigan in the Capital One Bowl, Tennessee will slice up Wisconsin in the Outback Bowl, and in reality, LSU will probably do a number on the sweater vest in the BSC Title Game.
_ _ _ _ _ _ _ _ _ _ _ _
Finally, I love watching college football from late August all the way through the first weekend in December but the bowl games are about money, and we all should know that. There is way to much money at stake for these games to be completely eliminated and a playoff system implemented so let us just accept that for what it is, SOMETHING TO COMPLAIN ABOUT AND THAT'S WHAT I DO BEST. READ IT!