Kris Kringle & I do WORK 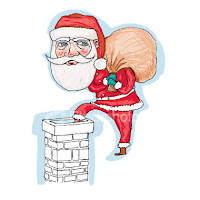 It is the last day of work for anyone who is actually important in their line of work or just going on vacation before the holiday. In the spirit of things I figured that I'd lend a hand to the BIG guy, no I'm not talking about Jesus, and hand out presents to some of our more noticeable sports figures. I want to preface this by mentioning a few people who wont' be recieving gifts, Shaq's ex-wife (for promptly putting the Diesel into retirement), O.J. Simpson (hasn't recieved a gift since the mid-90's) and Charlie Weiss (whose been robbing the ND Board of Trustees all fall). Opening up the BIG BROWN BAG . . .

1 Monoply "Get out of Jail Free" Card for you know who. The real life Cruela DeVille. Mike Vick. How can we not give a christmas present to a guy who says "he's learned his lesson." When I was growing up I also learned some lessons, Carmelo taught me "Don't Snitch," Allen Iverson taught me about how you can't throw your wife out of you house naked in the cold because you think shes cheating, and now Mike Vick taught me, no burning the testicles of fido. Thanks, Merry Christmas.

1 Copy of the 'Mitchell Report' to MLB Commisioner Bud Selig. Just hours after Senator Mitchell delivered his findings in the steroid investigation, or as I like to refer to it, interview with club house attendents, Selig answered questions regarding what was in the report. ALL THE WHILE ADMITTING HE HADN'T READ IT YET. Almost direct quote "I haven't had time to review the report extensively." Errrrrrr I was almost on page 300 after looking at it and attempting to pretend to work for two hours yet Ole' Bud didnt have time to review it yet. Being the owner of the club who just signed one of the most prominent and OBVIOUS steroid users Eric Gagne, you would think he'd look through it right? Well, Happy Holidays, your very own copy.

Christmas came early for Jacksonville RB, Fred Taylor. Taylor seems a lock to replace the newly injured Steelers RB and rushing leader, Willie Parker in the Pro Bowl. After the Jags were completely snubbed and zero voted to Hawaii, Willie Parker broke his leg thus ending the season for fantasy geeks everywhere and Taylor most likely will be getting his first Pro Bowl nod of his career. Fred Taylor has gone all but un-noticed his entire career, quietly one of the few top 20 statistical RB's of all time with zero Pro Bowl nods. So for you my friend, I have Broken the leg of Willie Parker. Merry Christmas.

to Sid The Kid and the NHL. I'd like to give the NHL 1 ESPN Hockey Contract. In 20 Years we are all going to wake up not even knowing about the career of possibly one of the top 10 Hockey Players of all time because of the current state of the NHL. I'm not a Hockey fan, never have been, probably never will be, but I also hate Cycling, Tennis, & Diving yet we all know the names of Lance Armstrong, Roger Federer, & Michael Phelps. Could be a crying shame that we don't know more about Sidney Crosby. Since the NHL canceled a season due to strike and canceled their ESPN Hockey Contract, your more likely to find a rerun of the popular 90's Sitcom, Coach. (great show by the way) I actually sat through a Bruins game last night, well let's be honest, PART of the Bruins game last night and the kid was pretty exciting, I was cheering for the Penguins once I saw him play that is. The Poinsetta Bowl with Navy v. Utah was more exciting, but I'm sure ESPN the DEUCE wouldnt' mind carrying Crosby games. Little stocking stuffer for ya NHL.

a BLOCKBUSTER NBA TRADE to Kevin Durant. It just is a GIANT waste to have him playing in Seattle for the Supersonics. A city that likes having an NBA franchise but doesn't want to pay for it, an owner that wants to send the team in the middle of Oklahoma a.k.a. middle of NO WHERE, and on a team where he is forced to shoot the ball WAY to much, and most likely will kill him earlier in his career than if he had been on a team that could develop him . . really? could we not have fixed this lottery with two of the greatest talents of all time coming out? Durant you need something good for Christmas, Trade Em' to a team that can allow him to become a superstar PLEASE.

Arthur Blank needs SOMETHING, ANYTHING, this holiday season. I heard it on a radio show yesterday but If I was Arthur I'd be going home and making sure my wife was going to stay with me. Michael Vick openly lies to him last Spring about his involvement with the dog fighting, Bobby Petrino looks him in the eye and says he is on board THE DAY BEFORE JOLTING him to head to Arkansas, and then Parcells uses him to leverage a job in Miami. If there is a guy who wants 2008 to come more than anyone, it is Arthur Blank. Hmm what to get a guy who has NOTHING.

1. Josh McDaniels - NE Patriots Offensive Coordinator, this young guy has to strike while the iron is hot. He is a "Belichick Guy" and after he goes 16-0 this season those guys could NOT be hotter. Benefitting in large part from the acquisition of Randy Moss and the unconscious play of Tom Brady, McDaniels is one of the hottest NFl coordinators in the business. .

2. Derek Anderson - Here is a guy who has a great thing going on in Cleveland and to be honest, I DON'T THINK HE IS GOING ANYWHERE. Arthur Blank and whoever the new coach is in Atlanta would greatly benefit from Anderson but he may just be to valuable to Cleveland right now. Proving this season that he can be a "solid" NFL quarterback in the league his value may never be higher and with the Falcons holding a top draft slot, you never know what a new GM would pay for an established quarterback. Especially when the alternatives have been Byron Leftwich, Joey Harrington, and Chris Redman. Look for McNabb, Grossman, & potentially top Draft Prospects Matt Ryan & Brian Brohm to also be in the Falcon Stocking.

3. Floyd Reese - Former 13 year GM of the Houston Oilers & Tennessee Titans, currently ESPN NFL contributor, Floyd Reese may be exactly what Arthur Blank needs. A guy who has proved his staying power, wants control over who he acquires and gets rid of. Reese is responsible for draft picks as deep as hall of famer Bruce Matthews, Steve McNair, Eddie George & Pacman Jones errrrr, so skip that last one, Jevon Kearse, and more recently, Vince Young. A General Manager who has had such success with draft picks both by their play of the field and also the extremly high tendency for them all to be signed before camp is another plus. Even if you don't go out and get a free agent QB, you can count on Reese to take the best available player in the draft.