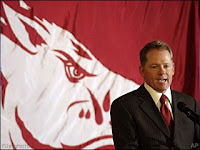 You don't know sleeze till you know NEW University of Arkansas head ball coach, Bobby Petrino. Less than 24 hours after assuring Atlanta Falcons owner, Arthur Blank, that he was in fact not moving back to college football and would continue on as the head coach of the formerly Mike Vick Falcons, Petrino was being announced as the head football coach of the Arkansas Razorbacks. Just when you thought no one was as much of a turncoat as Nick Saban was, ole' Bobby one ups him and storms out of Atlanta and leaves it burning worse than when Sherman went through.

First off, the guy walks on Brian Brohm and the Louisville Cardinal after they had a great year, strike while th

e iron is hot, I get it. But what about all those high school students who he had heavily recruited earlier that fall? I'm guessing ole' Bobby didn't mention that while he was sitting in those living rooms and telling them how Louisville was a program on the rise with National Title hopes? You can't tell me that no blame goes to Petrino for the defense that Louisville displayed this year, were talking about a defense that gave up 42 points to Middle Tenn. State and got massacred against USF in Tampa, 55-17. Not only does Petrino screw former Heisman candidate Brian Brohm by leaving to Atlanta at the end of last season, but I'm sure Brohms wallet might be affected by Petrino's newest job in Arkansas. This isn't the Matt Ryan bias coming out in me but Brohm isn't so much of a lock to be the first quarterback taken after he coached up Chris Redman to the point where the Falcons may not even be selecting a quarterback AND the Brohm/Petrino relationship gave the Louisville signal caller a little more hope of being a top 5 selection, which means BIG MONEY. So now, HALF of the state of Kentucky and the Brohm family welcomes another shot at Bobby. 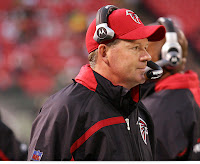 Now to the Falcons. Do I feel bad for the fans? Yes, who wouldn't they had no idea they were cheering for a serial dog killer (again, I will refrain from my opinion on the idiocy that has occured here) Did they choose Bobby Petrino? In my mind there is only one person who can refer to himself as Bobby, that would be Bobby Bowden, anyone else who is referred to as Bobby and over the age of 30 needs to look in the mirror (makes me think of Bobby Brady) Not to mention the guy has said LITERALLY NOTHING publicly about what he thinks of Mike Vick or the situation. Widely hated by the assistants who HE HIRED, meaning they did at one point like him enough to apply for the jobs. While were on em' the assistants had families they moved to Atlanta, and uprooted, now Petrino just ditches them in the middle of the night? NEWSFLASH they are going to lose their jobs when the new coach comes on board you dick. It almost pains me to utter the next few lines: I actually AGREE with D'Angelo Hall, Joey Harrington, and Lawyer Milloy. Petrino couldn't handle the NFL, where the players make more money than you, you don't just get a new crop every winter based on your ability to handle a living room, AND he really isn't man enough to face to face talk to these players. THE GUY WROTE A F'N letter to a bunch of adults explaining his non-explanation for leaving Atlanta. Now I don't know much about Arthur Blank, but what more can this guy handle? I just hope his wife doesn't leave him next.

Arthur Blank is a crybaby. If a player is costing him too much even though they have a contract and an agreement to one another he just cuts them without losing any sleep over the whole situation.

Suddenly the shoe is on the other foot and an employee decides he doesn't want to be around anymore so he leaves -- and i'm supposed to feel bad for Arthur Blank...boo fuckin whoo.