You would think after the Packers v. Cowboys showdown, and the Ravens scare on MNF that we would know all we need to know about this year in the NFL. What I learned this weekend is that what seemed like a straight shot for both Dallas and New England to meet in Glendale for part II, will be slightly more difficult than advertised. (this week is going to be the start of a weekly segment, I have tentatively agreed to call "dropping knowledge" gives it a little street flair for this caucasian kid from the burbs)
The Green Bay Packers are better than what they showed against Dallas when they played each other last week. True, they did just play Oakland but it wasn't that th 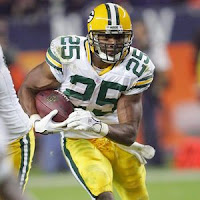 ey punched Oak-Town in the mouth that impressed me, it was HOW they beat them which did that. Ryan Grant needs to touch the ball for the Packers to win in the playoffs, against a good defense you have to run the ball, and let Brett win the game when it is close. Brett Favre is a good quarterback but throwing the ball more than 30 times a game allows you to become predictable, throw 3 pass rushers at you, drop 8 and let them play outfield, that was how Dallas took advantage of them early.
Talking trash is for guys like Peyton Manning and Tom Brady, not guys like Jon Kitna and Anthony Smith. Let us start off with Jon Kitna and the DETROIT LIONS, you played well and I applaud that but you rip the entire Dallas defense last year and also predict one of th 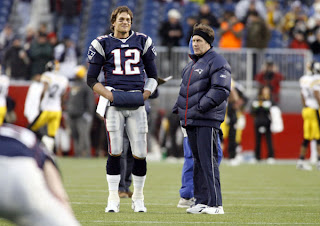 e most losing franchises in the NFL over the last 20 yeas would win 10 games this year. Jon, pick up your bible you jesus loving maniac and go to the doctor, if not for that running game of yours Dallas runs Detroit into the ground yesterday, and 10 games? Bro, you were 6-2 and have lost 5 straight . . . . . Barry Sanders coudln't win a Super Bowl with Detroit, what makes you think you will? Since you probably don't know, or care who Steelers back up free safety, Anthony Smith is, he is the guy who Tom Brady and Randy Moss ABUSED LAST NIGHT, I'd say they took him out to the proverbial "wood shed" but that would be an understatement. Anthony Smith, I don't play professional football, nor would I ever be good enough to play professional football, but I do know that you don't run your mouth when your a backup, when your playing a team who hasn't lost a game, and more importantly, WHEN KNOW ONE OUTSIDE OF PITTSBURGH EVEN KNOWS WHO YOU ARE. How does it feel to have Tom Brady in your face letting you know he's about to go deep on you AGAIN, and AGAIN, and AGAIN, and there is nothing you can physically do about it.
While we are on Brady, whose stopping New England at "THE RAZOR"? Jacksonville? Cleveland? Pittsburgh? maybe San Diego? Indy? . . . . . . . here is a thought. NO ONE. Come on, Philly took a shot, Baltimore took a shot, it ain't happening. They'll be in Glendale where all bets are off, but as far as the AFC goes? Champagne will be on ice till next season Don.
Miami will NOT win a game. That is a bad team, it isn't that they don't try, it isn't that they are out coached, they are just bad. Mike Ditka said that this morning on the radio, and he is right. The Fins aren't beating New England so get that out of your head, if you believe that will happen I got a story to tell you about a guy who comes down chimneys, an oversized bunny who hides eggs, and 3 little pigs who could build houses. Baltimore, New England, and Cincy . . . . . which of those teams will lose to Miami? Do you think Baltimore and Cincy want to be the team that LOST a game to Miami? This has gotta hurt Don.
New York Giants and San Diego Chargers aren't winning anything, you may say well they both won games yesterday, close games, but let us look at these teams for what they really are. The "G" men lost to Dallas twice, and Green Bay . . .the only two teams who will compete for the Super Bowl, they let Philly hang around yesterday, when Philly had no business hanging around, and not only that but Eli Manning seriously just looks bad out there. He overshot Shockey in the endzone on a wide open play, a play which Romo, Brady, Favre, Peyton, all make. Plaxico IS hurt, he made some miraculous plays yesterday, but watch him get up, watch him in pre-game, the guy is clearly injured. The Chargers? Lost to New England, should have lost to Indy, who are they going to beat? Norv should have never been hired, and you shoudln't have let your offensive coordinator and defensive coordinator get poached. Good Luck Phillip, now you've got LT pissed at you.
and finally . . . . .
We have seen the last of Michael Vick in the National Football League, PERIOD. I will leave my opinions on the charges out of this because it is at the point where they ju

st don't matter. Sentenced to nearly two years in federal prison for dog fighting and gambling among other things, let alone the fact that the commish will probably tack on another season after he is released from prison. Where does that leave Michael Vick? He won't be the type of athlete I'd take a chance on as an NFL owner, why would you? He'll be approaching if not already 30 years old, out of the league for almost 3 entire seasons, and it'll be a public relations nightmare for the team. So what would be the benefit? Hello Canadian Football League.
Posted by Lynchy at Monday, December 10, 2007

Here's a strange though. Would you rather be the Patriots and have some form of Pittsburgh/Jacksonville/Cleveland/San Diego and then Indy to get to the Super Bowl in New England?

Or would you rather be Dallas and have to face Seattle/Minnesota/Tampa Bay/New York and then Green Bay in Dallas?

Think about both teams, what they do well and what those opponents do well. Doesn't it seem like Dallas has a tougher road to the Super Bowl?

Like wouldn't you rather face Norv Turner and the Chargers in Foxboro if you're the Patriots, then Adrian Peterson and the Vikings in Big D if your the Cowboys?