Let me settle it . . PLEASE

I know that every national media outlet wants to continue to annoint Bill Parcells as the son of Christ, especially around this holiday but HOLD THE PHONE please. The guy isn't exactly "responsible" for the 12-2 record of DA BOYS. Besides the incarceration of Michael Vick, exempting the Falcons from a "good season," the injury riddled 49ers, and the fact that Jon Fox has literally done nothing over 5 years to improve the Panthers, there is alot more factors that make the Cowboys 1 or 1A in the NFC. NONE Of which I credit to the Tuna.

Tony Romo, an UNDRAFTED free agent was NOT THE RESULT of a "all knowing" Bill Parcells, and I know you all may think that, but thats because you dust off fossils and I dig them up. Last years wonder kid and brain child behind the New Orleans Saints, oh yea, and former OFFENSIVE COORDINATOR OF THE DALLAS COWBOYS UNDER THE TUNA, is an alumnus at Eastern Illinois, the same school which Romo attended and won numerous awards in his four years there. He is responsible for convincing Bill to grab this kid as a sleeper because he'd seen him play when Bill was busy recruiting Bledsoe, Terry Glenn, & Vinny Testicularverde to come play in Dallas. Two offseasons ago after Payton had took the job in New Orleans, Romo was the guy he wanted to come with him, but Jerry Jones & Bill had blocked that. So he convinced that crazy ass owner in NO to sign Brees, which again seems like a pretty good move now. The most stable and 9th quarterback to start since the retirement of Troy Aikman, isn't the guy who Parcells shopped for. MAIN REASON FOR THEIR 12-2 start.
The Dallas rushing attack is led by none other than errrrr Marion Barber, NOT Julius Jones, the Notre Dame RB that Parcells had fallen in love with. In the Tuna's last season with Dallas he as most NFL coaches do refuse to admit when they are wrong, continuing to hand the ball to Jones the whole game until they got into the red zone, where Jones sucked. Barber was among the league leaders in touchdowns that year, and still couldn't get consistant carries. PS Ask Rodney Harrison what its like when 24 comes running at you.
I give Parcells some credit for the defense, the defense that allowed Aaron Rodgers to torch them in the second half against the Packers, the defense that allowed Trent Edwards to march up and down the field in Buffalo, and the defense that gave all those Pats fans more things to torture me with. Kudos on DeMarcus Ware though, he is dirty.
How about TO? Aside from the 1 or 2 games where DB's blanketed him, TO has been a model reciever, hasn't dropped as many balls, scored a ton of touchdowns, and remained subdued at times. The guy who Parcells didn't want, refused to call by name, and Jerry Jones went out and got. Granted Jones pays TO as much as he pays his own Plastic Surgeon, but who cares it ain't our money. 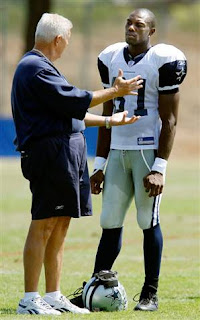 Listen, I watch more than 1 NFL game every Sunday, I know which teams can play and which teams in large part can't. I know that the team that plays from Dallas is alot better this year, alot less likely to pound the ball 40 times a game, and in todays NFL, a team that is willing to break a game open through the air and put points on the board. All things Parcells didn't do. So when you run your mouth about how much he has done for the Dallas Cowboys, New England Patriots and New York Jets remember this. ZERO SUPERBOWLS while he was at the helm of those franchises. At the end of the January there are still 31 teams that go home as a failure, you play to win championships not to "make" the playoffs.
Posted by Lynchy at Monday, December 17, 2007