JUICE ME UP BABY 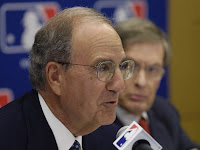 Let me be the first to say, I LOVE STEROIDS, alright so maybe Canseco said it first but you get the point. After the "World Wide Leader" covered the release of the Mitchell Report for 24 consecutive hours I'm JUICED UP, no pun intended, but i'm not that shocked and who really is? I want to get several points across to whoever is reading this, and you've probably heard a stance similiar to mine because after ESPN interviewed everyone who thought anything yesterday, I'm sure i'm not the only one with these opinions.
George Mitchell was reported to collect $60 mil from MLB to conduct this witch hunt, in my mind that is a travesty. $60 Million put toward the education of young athletes on the dangers of steroid use would be a great initiative set forth by MLB. Instead Bud Selig chose to spend the money on this, a weak investigation done in part to make it seem like he is "doing" something on his end to absolve himself of blame.
If you don't get it yet, I DON'T THINK THIS SHOULD HAVE EVER BEEN DONE. I'm right about this and no one will convince me of anything different. Look, what was going to come out of this? We already knew that the last 20 years of Major League Baseball was riddled with steroids and other performance enhancing substances so no new news there right? So Mitchell goes out, finds some names and tells you all a bunch of shit you could have figured out on your own, the one exception? Guys who were facing federal jail time gave him some cashed checks, big deal. We'll get to those "guys" in a second. It was a meaningless investigation that just gave Barry a little company, thats all, didn't change my opinion about one thing regarding steroids.
Roger Clemens was on "the list" NO SHIT, all those people tearing up Barry Bonds for the last five years, for reasons I'll leave you to figure out, never ONCE applied the same thoughts to 7 time Cy Young Award winner Roger Clemens. I'm not saying 40-year old pitchers winning the Cy can't happen, i'm saying velocity 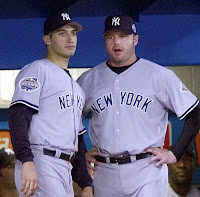 doesn't go UP when you get old naturally, i'm saying your muscle mass doesn't double when you hit 38 years old no matter how hardcore you train, and have you seen Roger when he struck out 21 in the 80's? HE WAS HALF the size then, as he is now, sound like someone from the Bay area to you too?
Imagine what that report looked like 1 year after Georgey started? HE HAD NOTHING. With ZERO subpeona ability and Don Fehr advising every major leaguer to hire their own counsel before speaking to anyone, Mitchell had NOTHING. His investigation was preparing to be a solid JOKE and yesterday would have never happened. UNTIL, Bud Selig squeezed Jason Giambi because of his bonehead comments to the media and intimidated him to the point where he was afraid of further punishment so he decided to give Mitchell as little as possible without getting in trouble. Kirk Rodomski, former New York Mets club house attendent, was facing serious jail time for distribution and with federal agents watching his every move decided to show Mitchell a bunch of canceled checks from MLB Players. THE ENTIRE REPORT is based on a guy who probably should be facing IRS charges, and a disgruntled personal trainer of Roger Clemens & Andy Pettite. THEY HAD NOTHING from any legit sources, and Mitchell knew it, he still knows it, he spit back the same shit we already knew, and it took him 400+ pages to do so. Why did he advise Bud not to take action? No evidence and no credible witnesses.
Give me a vote, and I'm PUTTING EM' ALL IN. If so many people cheated and it is soooooo wide spread then doesn't that in itself level the playing field? Roger Clemens, Barry Bonds, and Mark McGwire all of em' go in my ballot. They were SUPERSTARS of the past 20 years and their numbers are so remarkable that even cut in half, which would be rediculous, they still get in. If you are so wacked about who used and who didn't, what are you going to do? eliminate the last 20 years of baseball history and act like they never happened? I'm sorry but I'm not looking my children in the eye and telling them that I never watched a clean game until I was 30 years old. .
Bud Selig and the owners of all 30 ball clubs are to blame in large part, along with the players of course. I cannot ignore that revenues, salaries, and populari

ty have sky-rocketed during that era and you know who benefits most? THE OWNERS, how does an owner shell out $36 million to an average run producer? BECAUSE HE'S MAKING THAT 20 times over. Of course they knew what was going on, you'd be ignorant not to. It makes me mad to hear that Bud was even the slightest bit dissappointed in Senator Mitchell's assesment of HIM and his cronies, I mean I know the guy dresses like he is teaching high school Math, but COME ON he probably has more bank than you or I could imagine.
Finally, if steroids made me better at my job and I couldn't get caught and it would better the life of my family and their families for the next 50 years, I would be injecting myself regularly you can bet your ass. (no pun intended)
Posted by Lynchy at Friday, December 14, 2007