The picture to your left is one of former IOWA quarterback, Brad Banks, current emergency quarterback for the New York Jets. Now you may be asking yourself "Who the f*ck cares about him?"
I do, unwisely a friend of mine bet me $20 that Banks did not attend Iowa and claimed he was 99% confident #7 attended Missouri. So on Monday morning he's left asking himself one simple question. How did Brad Banks & Tom Brady cost me money yesterday? Useless sports knowledge pays kids, watch sportscenter. . . . . . . BRAD BANKS FROM . . . . . . . IOWA! 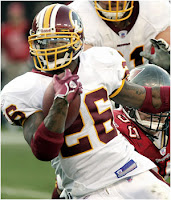 The NFC East will have 3 teams rolling into the playoffs this year, making Philly the odd team out. Washington will need a win against Dallas to put them in the playoffs and with Owens and Romo likely sitting after the Cowboys clinched homefield with the Packers loss this weekend, the Skins will be in. The Giants fought back in the snow and got a clinching berth by defeating the Bills yesterday. For years I have said this is the most competitive division in football now people see why. Philly, Dallas, & Washington could beat any team in the league on a given Sunday when healthy and the Giants, well there is always one team that f's it up.

You won't see T.O. for another two weeks at least, the santa hat clad Owens limped off the field Saturday night, Crutched out of Carolina, and apologized to Jessica Simp

son. Well at least you won't hear from him for a couple weeks . . . . hahahaha You have a better chance of seeing Danny 'Fucking' Kaye dance through your living room this holiday. Owens needs to be back for Big D to advance in the playoffs that is unless you believe in the recieving cor of Miles Austin, Sam Hurd and Patrick Crayton. 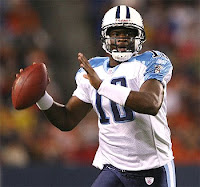 On the heels of the Cleveland Browns releasing their new T-Shirts in time for the holidays calling themselves "Believeland," Vince Young controls the destiny of his Tennessee Titans, win and your in. One of the best stories in football played their way right out of the playoffs yesterday, oh wait, Tennessee is playing Indy? If the starters weren't going to get some time off next Sunday then I'd say the Browns are def. OUT, but they aren't, a Titans loss puts them in the playoffs no matter what. Up to Madden cover boy to keep his team alive and living to play another week, where they will promptly get a first round exit. Good Luck Vince. 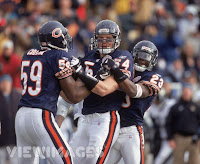 The All-World Linebacker Brian Urlacher and the Chicago Bears waxed 'Wrangler' Brett yesterday thus ending the shot of seeing an NFC Championship in Lambeau. (removing sweat from my brow) I'd still give the nod to Aaron Rodgers if Green Bay ends up in Dallas, but thats just me and most likely JUST ME. I thought Urlacher was going to beat up on the Vikes last week and steal a win from them but a win against the 'Pack' like that will satisfy me. See you next year, thanks 54. 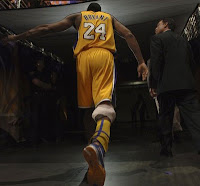 Hat's off to Kobe "Bean" Bryant, fastest to 20,000 points. Kobe is considered one of, if not the best player in the NBA and in my mind one of the top 5 scorers of all time. It is kind of amazing that players still live up to the hype these days when coming out of high school and Bean is one of the few players who actually do and have their entire career. 1 Final question for him: Will he win 1 ring post Shaq? If I was a man with a slight betting problem, which I am, I'd put money on it. 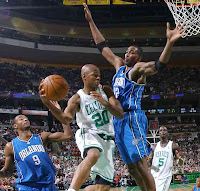 Not getting away from this one without saying I told you so. Had Tony Allen not boneheadedly gone for an upfake that Tommy saw coming you might be looking at a Celts team that just knocked off Detroit and Orlando in one week. I like people overlooking the C's though, saying they haven't played anyone, it gives them a competitive advantage. I like KG when he is dominate, but when he is angry and dominate? That would scare any man. The first win was lucky, now the C's stay healthy and you may see 3 professional sports team from the epicenter take home championships this year.
Posted by Lynchy at Monday, December 24, 2007