NFC Championship Part 1 (that you won't get to see)

By now, if you follow sports so religiously because your real life job sucks. you know that the NFL's Thursday Night football game between the Pack and Cowboys won't be televised on "regular" television because the NFL doesn't already make enough money charging $28 for 4 bottled budweisers at each of their stadiums, but I digress. The NFL will be televising the game on its own network, promptly named the NFL Network, original. So how about I give my readers a preview of a game that they probably will only see highlights of, how exciting is that?
This game will most likely determine homefield advantage throughout the playoffs in the NFC, much like the earlier matchup this season between the Patriots and Colts in the AFC. Both the Cowboys & Packers will face simliar opponents in the final four weeks of the season, making this game even more important. The Pack finishes with Raiders, Rams, Bears, and Lions, oh my . . . . . . that was corny, Dallas finishes with 2 divisional opponents and the Panthers and Lions. Because of New Englands 11-0 bout with history both the Cowboys and Packers could finish the season with 15-1 and 14-2 records and seemingly fly under the radar, and here is why:
Dallas' 10-1 record, while a great start isn't that impressive. The Cowboys have victories against the Jets, Rams, and Dolphins who have a combined record of 4-29. Their one loss was a 3 touchdown loss to the Pats who are 1 of 2 teams they have played with a winning record, the other was the Giants who Dallas has beaten twice. Green Bay? Key victories include that same Giants team whose quarterback is making Phillip Rivers look like John Elway, the Detroit Lions, and San Diego Chargers. Like Dallas, the rest of their victories came against teams with losing records. Their loss however was against a Bears team which Dallas seemed to handle pretty easily early in the season.
TO THE QUARTERBACK MATCHUP: Romo v. Favre . . . . Favre's season is extremely impressive given his age, the last couple seasons he has had, and the numbers that he has been putting up are nothing short of astounding. 298.5 ypg is good for #2 in the league behind the future Eddie Murphy, Tom Brady. Favre is in the top five in the league in passer rating, touchdowns and yards per game @ 38 years old, you know what most 38 year olds I know are doing? NOT WINNING 10 professional football games in one season, thats for sure. The o

nly thing Favre is doing that guys his age do is wearing wrangler jeans. Now, for Tony Romo . . . here is a guy who has recently started dating pop superstar, Jessica Simpson. Do I need to say anything else? Fine. Romo is top 5 in the same categories as Favre and if not for Travis Henry a.k.a. Tom Brady, we would be talking about the rediculous TD passes that Romo has been throwing, 29, but that is still 10 behind Brady, yet good for 2nd place on the list. Romo has also engineered the Cowboys to 30+ points in 7 out of their 10 wins. Ummmm can I take any more dumps on Tom Brady? Nope, topic ended. (It's just jealousy, I really want to BE Tom Brady.) Favre's top target is Donald Driver who averages nearly 14 yards per catch and is 13th in the league in receiving yards, Romo on the other hand is throwing to argueably the top receiver in the NFL, T.O. who is only 2 yards off the lead for most yards recieving, along with all-pro TE, Jason Witten (750 recieving yards) and he never ran over a meter maid like Randy Moss did. 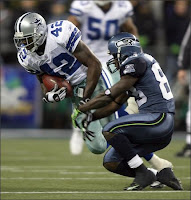 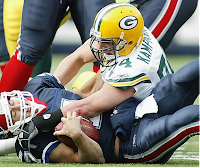 Besides under center these teams both are extremely talented all over the football field especially on defense. The Packers run out the league leader in sacks, DE Aaron Kampman with 11 total sacks. They also have a linebacking cor of A.J. Hawk & Nick Barnett who have combined this year for a total of 163 tackles and both rank in the top 30 in tackles. Their 12th ranked defense is nothing to overlook, neither is the 7th ranked defense in the league, that of the Dallas Cowboys lead by their defensive backs Roy Williams, Terrence Newman, Anthony Henry, and Ken Hamlin who combine for 16 interceptions on the year. Henry who is tied for tops in the NFC with 5 (much respect to Redskin, Sean Taylor, may he rest in peace.)

Quick Sidenote: If you don't know Patrick Willis, first year linebacker for the San Francisco 49ers, he leads the NFL in tackles with 110 and covers the entire field like Ray Lewis used to 3 years ago. I say this because while researching defenses in the NFL, Willis is the name that comes up most, he is a beast.
The 'X' Factor - Marion Barber, the Cowboys runningback is off to his best season on the ground, through 11 games he has 715 rushing yards, more than any in his

3 year career. Barber has firmly replaced Julius Jones as Dallas' #1 choice in the backfield, to go along with his 700+ yards Marion has rushed for 7 touchdowns. Averaging 5 yards a carry, he is one of the most difficult backs in the league to take down on the first hit, it will take both Hawk and Barnett to slow down Barber who is on pace to eclipse the 1,000 yard mark this season. Ask Rodney Harrison how getting facialized by a Barber stiff arm feels, and he was on roids. Green Bay's 32nd ranked rushing offense will have to improve this Thursday night if they expect to beat Dallas on the road, with the hawks in the secondary, Dallas will be able to drop linebackers and not be concerned with the weak ground game.
Posted by Lynchy at Wednesday, November 28, 2007

I hate to disagree with you buddy (which of course you know is false) but I think you're underestimating the Packers running game.

The real ex factor in the game is Ryan Grant who since he became the #1 back in Green Bay has been better then Marion Barber. Since he became the feature back Grant has 101 carries, 467 yards (4.62 YPC) and 2 touchdowns.

Meanwhile during that same stretch Barber has gone 80 carries, 332 yards, and 3 TDs.

Obviously Barber splits some time with Julius Jones but while the Packers through the season have had the worst running game in the league, since Grant has become the starter they've been better then average.

Oh and yeah T.O. never ran over a meter maid, but he Randy Moss never called every QB he's ever played with gay, or potentially tried to kill himself. Moss has also never been sent home for the remainder of a season because of his attitude.