D-D-D-Dropping Knowledge, Thanks 50 Cent for the Intro:
Celts are still undefeated at home (20-2), Bobby Petrino is still a scumbag, and I wasn't mentioned in the Mitchell report. All in all i'd say it was a pretty good week. Second time i'm posting this and hopefully I can exhibit Patriot like consistancy and produce a pretty good blog.
Jessica Simpson better not screw up Tony Romo. In the midst of my dream season, minus that loss to the Pats earlier in the year, Romo started playing like he was Nick Lachey this Sunday in the Cowboys second loss on the season 10-6. DeMarcus Ware playe

d like the beast that he is and the Cowboys didn't even score a touchdown. While the camera flashed to Simpson 5 times in the owners box, wearing a pink Romo jersey, i've never been that annoyed at a blonde with big, well you get the point. I did want to point out that Brian Westbrook may be the only athlete to ever play for a Philadelphia franchise that I actually like, by far the key offensive weapon on the Eagles he is probably one of the smartest players on the field every Sunday. Aikman pointed out that "how many players would have stopped on the one yard line to ensure a victory rather than running the ball into the endzone" not many, and Westbrook most likely did that on his own. Da Boys have 2 games left, and all of a sudden they mean something, the only thing in the NFC that can stop Green Bay and Brett Favre is Texas Stadium.
Not Tom Brady, Randy Moss, Rodney Harrison, or Richard Seymour were the MVP of this weeks latest drama in Pats v. Jets, but that title goes to Kelly Washington. Yes, in New Englands 20-10 win over New Yorks other NFL team, Kelly Washington pinned the Jets inside their own 5 yard line on the first punt of the game by saving it before the ball rolled into the endzone, result P

ats pick the ball off and walk into the endzone the very next play. Kelly Washington also later would block a Jets punt setting up the Patriots with excellent field position, result of which led the Patriots to a score. Hats off to the Bengals reject and to the DB's of the Jets who I think played a pretty good game . . . . (cough, cough, thank you for covering)

Baltimore announces this week that they will not be terminating Brian Billick at the end of the season, he repays them by being the first team in the NFL to suffer a loss to the 0-13 Miami Dolphins, nicely played my friend. On ESPN countdown, Ditka predicted the Dolphins win and his explanation was "i don't know why, i'm just picking them" if only we could do that at our jobs when the boss asks us why we did something. Not only was this the 3rd game that CBS decided to cut in and show us, but when they did cut in we witnessed Troy Smith playing quarterback for the Ravens, which may actually have been a step-up from Kyle Boeller. I guess if you can't mess up someones unbeaten season, then messing up someones imperfect season is the next best thing. Go Ravens!
The Wolverines HATE the Moutaineers. For the second straight year Michigan has lured a head ball coach away from West Virginia. Last year the Wolverines hoops program took a stab and secured West Virginia head coach John Beilein and this year they have successfully lured in a new head football coach, Rich Rogdriguez from West Virginia. Talk about a shitty 3 weeks for the West Virginia football fans, here you have a team who is 10-1 and on the 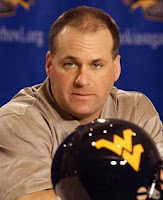 ir way to a National Championship game, then they lose to a Dave Wannstedt coached Pitt team and are headed to the Fiesta Bowl against Oklahoma at which they will be coached by an assistant because Rodgriguez is now in Ann Arbor. I don't know how Michigan fans feel about this but I'd be a little scared of a new coach who just choaked his way out of a National Championship, especially considering their recent woahs with ole' Lloyd. Back to the coal mines for the WV fans.
Canseco v. A-Rod Jose is wearing a little thin on me these days. Not the most humble of men, we know that, but after everyone is finally willing to admit that he isn't as obnoxious ass, he won't shut up now. Jose is now upset that A-Rod wasn't named in the Mitchell Report, and he says that his new book about steroids will mention things about A-Rod since their paths once crossed. I really don't like A-Fraud all that much, and my opinion of him isn't good, but i'm going to stick up for the guy here, the reason he isn't mentioned in the Mitchell Report along with the fact that he possibly may never have done steroids or HGH is because those mentioned in that report are people who came in contact with 2 clubhouse attendents, who never crossed paths with A-Rod. Balco has nothing to do with Rodriguez because he never played for a BAY AREA ballclub, and Larry Bigbie never played with him as well. The others named are people who are stupid enough to buy drugs from a pharmacy on the computer and use their real names, like Troy Glaus and Gary Matthews, and that in short is where the senator got his information. SO SHUT UP JOSE. Did he really think that MLB was going to hire him to develop an extensive report on widespread steroid use over the last 20 years? I wouldn't hire the guy to do my laundry.
Kobe is finally happy, for now. With the Lake show off to a 13-9 start and playing pretty well for a team who Kobe wanted nothing to do with three weeks ago, Bryant is finally sitting idle and not begging to 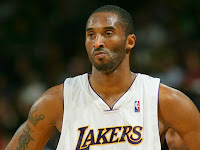 be traded. I'm sure we will revisit this topic when they go into the tank 1 week after the all-star break. Did you really think he would be traded anyway? Who are you going to trade Kobe, the most exciting player in the game, for? Answer me that, this is L.A. and Luol Deng, Ben Gordon, and Tyrus Thomas aren't L.A. Jack doesn't pay to watch Luke Walton, he pays to watch Kobe Bryant score 81.
Alex Rodriguez was the feature this week on 60 minutes, Katie Couric hung out with him at his house with his wife in toe and watched him in the batting cages as well. He hung Boras out to dry (which I believe was planned by the two of them), he never explained who the blonde woman with him in Toronto was, and basically made an attempt to get every person over 50 who watches that show to like him. I watched it as a baseball fan, and thought what I've always thought when I heard A-Rod talk, he's full of it and himself. I don't believe his personal friend is Warren Buffet and I don't believe he negotiated the contract without Boras' opinion, seeing as how Boras is in line to make 15 million out of the deal.
Lastly, I watched ESPN countdown this morning, as I mentioned before, and they did a piece on Browns quarterback, Derek Anderson from Scappoose, Oregon. Well his friend and Playboy Playmate of the year Sara Jean Underwood from the same hometown, was talking about how Anderson and his friends used to play a game in Scappoose called Poop Dollar. What is Poop Dollar? It is a game where you place a pile of poop under a dollar bill and laugh when people pick up the dollar bill. My response to that went something like this:
errrrrrrrrrrrrrr, that is what they do for fun in Oregon. Answered one question I've always had.
Next Week Preview:
Celts v. Magic II
Dolphins look to begin a new streak (hahahahaha)
Michael Vick builds a team of his own sort of like in 'The Longest Yard' GO VICK!
Posted by Lynchy at Sunday, December 16, 2007