While one of the saddest weeks in school history for the University of Miami, this weekend alumni all over the NFL played with big hearts and were an inspiration to everyone. Saddled with the death of one of their own, we saw some of the most dedicated football players let alone most talented football players in the league play with more heart than I've seen some guys play with in the Super Bowl.

Put aside the refs, the undefeated season at stake, and the bonehead timeout by the Ravens sideline and you are left with 3 former University of Miami standouts playing serious football which no doubt was sparked by the death of their friend. Ray Lewis, Ed Reed, and most notably Raven RB, Willis McGahee gathered before the game in prayer and I couldn't help but notice what the camera crew picked up out of the mouth of Ray Lewis came something like this "the outcome of the game isn't as important as how you play the game, play with everything you got." Not only is Ray one of the most feared athletes on the planet, for more than one reason cough cough errrrr, but here is a grown man letting tears out before the game when he knows the cameras will be on him, Reed, and McGahee because of their ties to "The U" that is nothing short of honorable. 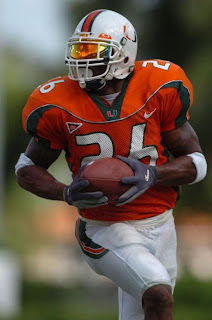 Their accomplishments last night won't be on the cover of Sports Illustrated because they lost the actual game, but that is why I wanted to note what they did. McGahee ran through the Patriots defensive line like a hot knife through butter, on 30 carries he rushed for 138 yards, if you watched the game, they couldn't stop him, I haven't seen him run like that since his first couple years in Buffalo. My friend Joe had it right, Ray Lewis looked like the Ray Lewis who was running from sideline to sideline making tackles two years ago, if not for the most rediculously called timeout of all time he would have made the tackle that won the game for his Baltimore Ravens. As for Reed, the Patriots dropped about 20 passes or I'm sure he would have made more tackles, although 3 tackles and 1 Int isn't to bad for one of the nastiest defensive backs in the NFL.

*My hat also goes off to Patriots defensive lineman, Vince Wilfork, who also played with Sean Taylor at the University of Miami and contributed with 6 tackles for the future 4-time Super Bowl Cheats, i mean Champions.
As for the rest of the alumni of The University of Miami, FLA . . .the workouts that they participate in over the offseason are legendary, they attract both current NFL players and current students at the "U" as well as retired players who've played at the school this I assume would create a real bond between the athletes, something like when George Jung went to prison with a bachelors in marijuana and left with a masters in cocaine, these athletes learn how to play professional football which why you see so many of them be successful in the league. I'd be pretty proud to cheer for the "U", on the field that is.
It's a sad day in the F-L-A
Posted by Lynchy at Tuesday, December 04, 2007