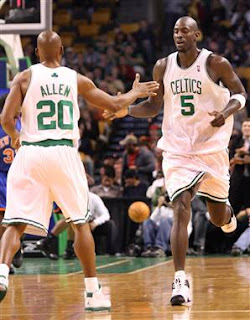 ESPN.Com's hoops contributor, Marc Stein, seems to be a little scared to make the Celts #1 or #2 in his weekly "Power Rankings." He loves the Spurs, no criticism there, he dropped the Suns from #2 to #4, they did lose to Kevin McHale's team, and he dropped Orlando to that #2 slot out of the top spot, I also would have done the same, but what is missing? OH YEA, #3 . . . that would be the BEST RECORD IN THE NBA, Boston Celtics, and a team who was a free throw away from starting off 18-1. Stein's excuse for Boston standing still with all the movement around them:

"I know, I know: Boston had nothing to do with spitting out such a cake early schedule. But I can't help it: Boston can't wow me more than the Spurs and Magic have until the schedule gets harder, like it or not"

Well my friend, I DO NOT LIKE IT.
DA Celts, have allowed the fewest ppg(88) than any other team in the NBA and that was supposed to be their weakness. Sharing the rock should have been a problem with most teams adding two superstars to a team who already had one, but the C's average 23.7 assists per game good enough for 5th best in the league.
Mr. Stein you want to say the Magic have "wowed" you and Boston has had a cupcake schedule? Won't disagree with the cupcake schedule comment but what exactly "wows" you about the six losses the Magic have notched up? 4 double digit losses, a second 4 point loss to the Suns, AND a 6 point loss to the Indiana Trailpacers (Thanks, I owe you ATH)? NONE of that really impresses me, Boston has ZERO double digit losses, only two losses on the season, and you could argue that they could very easily be 19-0. I know, I know they did lose to the Magic, but Detroit lost 4 to the Cavs last year, and no one would argue the Cavs are a better team.
The Celts have two big games coming up, on the 19th they play against Detroit, and the 23rd they get a second crack at the Magic. If the "Boston Three Party" comes up with two wins in those games, can a northeast hoops team get some love?
Posted by Lynchy at Tuesday, December 11, 2007