We are mid-season and many teams are underperforming with a team that should be winning, so turn back the clock three years and LETS TRUMP IT UP:

Scott Linehan, St. Louis Rams - From September 9th to October 28th the St. Louis Rams, former 'Greatest Show on Turf' have scored a total of 99 points in 8 contests. Those 99 points, are good for the lowest scoring team in the NFL. 4 road games and 4 home games have resulted in 219 points allowed and 8 defeats. Stephen Jackson was supposed to break out this year and lead a very powerful ground game, they have the 29th ranked rushing attack in the NFL. That same offense leads the NFL in turnovers as well, with 24, which includes 16 interceptions, also a league high. This past week they have equaled their loss total for the entire 2006 season and they still have 8 games to go against the Saints, Packers, & Steelers which will all be losses. Linehan finished his first season in St. Louis with a 8-8 record. 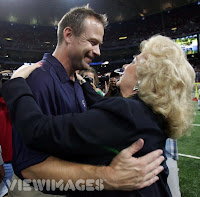 This is a small quote from the St. Louis Rams website regarding Linehan & the Rams offseason:
"The strong finish of 2006 was a springboard to an equally impressive off-season that saw Linehan and the Rams aggressively address a myriad of needs. They signed such free agents as Drew Bennett, Randy McMichael, Chris Draft, and Todd Johnson, and traded for James Hall, Dante Hall, Donnie Jones, and others. "
I'd assume that Linehan was brought over to bring the offense he constructed in Minnasota to St. Louis, the two years prior to Linehan's arrival the Rams were a combined 14-18 with 1 playoff appearence in 2004. For Scott to reach that point he'd have to go 6-2 the rest of the way, and if 6-10 overall got you into the playoffs in the NFC you oughta just throw out the book and give the Lombardi trophy to the winner of Pats v. Colts, part deux. Sorry, YA FIRED!
Marvin Lewis, Cincinnati Bengals- clearly the most disappointing team in the NFL and franchise in the state of Ohio. The Cavaliers made it to the championship series in the NBA and the Indians a 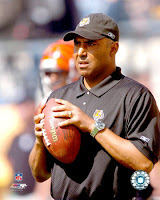 dvanced all the way to the ALCS in baseball, and the states college football team lost in the title game last year and is currently sitting at #1 in the land behind, 'the Sweater vest,' Jim Tressel. The defensive genious who helped lead the Baltimore Ravens to a Super Bowl victory was brought in to turn the Bengals franchise around, and since he has been there its been the defense that has held this team back. Obviously losing control of his players off the field is discarded due to the dozens of arrests this franchise has seen of its employees over the past three seasons, proving these aren't isolated incidents going on. With offensive talent like Palmer, Johnson, and Houshmandzadeh the Bengals still have been unable to win probably due to their 30.5 pts a game allowed and 350+ yards allowe a game. So when do the Bengals and their fans continue to be satisfied with Lewis' inability to input a strong defense? Brian Billick was brought into Baltimore with an offensive mind to create offense and help them win, he has yet to do that the difference? A SUPERBOWL VICTORY. Sorry Marvin, 2-6 and 4th place in your division isn't good enough, YA FIRED!
Andy Reid, Philadelphia Eagles - Now I don't want to be accused of piling on Reid, but the question has got to be asked, for his own sake should the Eagles step in and relieve him of his head coaching duties at this point? Reid has had a very successful tenure at the helm of the Philadelphia Eagles, he is the guy who runs everything for that organization, but th

at may have all come at a great personal cost with the troubles of his two boys at home. His appearences in the NFC title games including one appearence in the Super Bowl only two years ago, all the while being considered one of the best teams in the game year after year have given him great respect as a head coach. It isn't just his personal off-field life that is causing the coach to lose sleep at night, the play of the Eagles this year has been very inconsistant, and after the Cowboys game on Sunday at 'The Linc,' and being the Eagles have to ask themself if Reid is still the answer? The Eagles 1-3 record at home, and 3-5 record over all puts them in last place of the division and with the Giants and Cowboys have to good starts it puts them by behind the eight ball already. When has Reid gone out and gotten McNabb help? Terrell Owens, and they made it to the Super Bowl, but since then besides refusing to negotiate with Owens, McNabb has recieved no support offensively with the sole exception of Westbrook. As a friend of mine pointed out, Reids loyatly to Donovan McNabb is killing the Eagles this year, not only did he in the off season go out and refuse to re-sign Jeff Garcia, the guy whose spark got the Eagles going and into the playoffs last year, but it was Garcia who played better than McNabb last year, but Reid went out and drafted a quarterback alot earlier than people suspected him to when the Eagles had more glaring needs. McNabb ranks 23rd in the league in completion percentage, he's had one great game against the Lions and other than that been very average. I understand that Reid is a good coach and has a great track record but there is no question that is work life and personal life have greatly impacted each other, if Reid were a player you don't have to ask what would have already happened. Put him on leave, suspend him, or straight up fire him, for his own sake. Sorry Andy, YA FIRED!
Posted by Lynchy at Tuesday, November 06, 2007