San Antonio v. Boston - Am I jumping the proverbial gun? You betcha.
With Boston College Football losing their second consecutive game (albeit to another UNRANKED CONFERENCE OPPONENT) and the opportunity for Clemson to completely void the entire 8-0 start and Heisman season of Matt Ryan, I've gone completely crazy. I've had to say goodbye to a possible BCS National Championship game, the Heisman trophy, and now possibly the ACC championship (along with a trip to the Orange Bowl) I swear the prospect of the Cialis erectile dysfunction Bowl is on the horizon. If that wasn't bad enough the insufferable New England Patriot fans have completely taken over the world. Anyone reading this in Dallas, TX please save me, I live in the epicenter of the sports universe and if I hear one more Patriot fan brag I might stick a fork through my skull.

I am as excited if not more excited about the 2007-08 Boston Celtics than Rosie O'Donnell was when she found out she could legally marry another chick (if it was any other lesbian like the one married to Ellen, then it'd be hot, but I digress.) Paul Pierce isn't getting doubled up any longer, he isn't comple

tely exhausted mid-3rd quarter, and he actually is doing more than his patented "erratic drive to the rim and throw it up then act like you got hacked" move anymore, this my friends, is exciting. Ray Allen is getting his quiet 20 points and 3 clutch 3's a game, and Kevin Garnett feels like Andy Dufrain did after escaping Shawshank, oh yea, and the Celtics are off to the best start in 20 years. I see the C's play friday night at another poorly named entertainment venue, TD BANKNORTH GARDEN, and two major "views" have changed for me:

1. I used to be against the light shows and ridiculous PA announcer, who I only wish I could meet in real life to see if he talks like that, "HELLO AND WELCOME TO MY HOUSE, I'M FROM AUBURNNNNNNNNNNNNN, MASSACHUSETTS AND CAN'T STOP YELLING AT YOUUUUUUU," his wife probably is deaf. I am all for it now, I loved when the Chicago Bulls did that whil

e introducing the hands down best basketball player in the history of the world, but I thought it was ridiculous announcing the likes of Sebastian Telfair & Marc Blount like that, I mean the crowd isn't getting excited to watch them play, we aren't that stupid. But when I hear . . . "FORWARD, FROM FARRAGUT ACADEMY, KEVINNNNNNNN GARNETTTTTTT" I get chills down my spine, haven't had that happen while watching the Celtics since 2001.

2. $6.75 is an asinine amount to charge for one 12oz. cup of draft beer, but I didn't even mind paying for it because of what I was about to see. Did I piss and moan the whole time when I had to watch Ricky Davis play and pay that amount for a beer? OF COURSE. If the Celtics sign Gilbert next year I'll be paying $10 bucks a beer and you won't hear a peep out of me (that's probably because I'll be sitting two rows away form the last row in the arena, but you won't hear a peep from me.)

About this whole "only team in the NBA left who is undefeated" thing, if it is 20 games into the season, then I'll mention it, but with 77 games remaining, it may be too early. Here is the thing that really gets me jacked up, the team leader in ppg isn't Garnett it is Paul Pierce, Ray Allen is the one who is taking the 3-pt to win the game not Paul Pierce, and KG leads the team in assists per game. What do those 3 things explain? UNSELFISH PLAY, the only thing , after injuries that could bring a team like this to a shuttering halt. Those three guys are going to make Doc Rivers look like the second coming of Red, 9 months ago Doc was about to get fired faster than Imus. New Jersey comes to play against Boston again the 14th, four days after they got shut down by the Celts, when Boston beats them a second time I'm personally forwarding this blog to Jay-Z. So have I mentioned I'm a Celtics fan? But who will the Celtics meet in the Finals 7 months from now?

Sidenote: It takes the NFL 5 Months to play out an entire season, yet the every other professional sport requires more than half the year.

San Antonio, one of my favorite quotes about a champion is "to be considered the best, you've got to beat the best," and that is why I won't hate on the San Antonio Duncans just yet. The picture to the right actually makes me squirm, but at least he isn't holding up a La 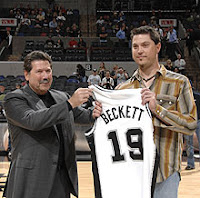 The Spurs are one of the only teams in the NBA that I respect, they don't go out and trade for street thugs like Zach Randolph, Greg Popovich isn't groping interns, and they've won 4 championships since Jordan retired the second time in 1998. Tony Parker is arguably the best guard in the league and a finals MVP to boot, Argentina's son, Manu Ginobili is averaging 19 points a game, and Duncan? I'll take his 17 & 10 a game any day, pretty much because he could explode for 30 on any night if he wanted to. This is the quietest dynasty in the history of the NBA. If the Spurs and Eva Longoria win it this year, that will be 5 Championships

in a 9 years. They've won more than Shaq, more than the Bad Boy Pistons, and it looks like they just signed Josh Beckett to pitch errrrr wrong sport, still a good move. I'm more scared of this team in the post season than I am of my mother. How have I gone this long without mentioning Big Shot Bob, he is currently injured and has this to say "I've got to get my bio-mechanics going again, could take three weeks," I don't even know what that means and I'm excited about it. How does Robert Horry have 7 rings and Karl Malone, Charles Barkley, and John Stockton have zero? Oh yea, I forgot, DA BULLS. Don't give me that, Horry had nothing to do with those rings, If he hadn't hip-checked Steve Nash into the boards last year, Phoenix wouldn't have been playing short-handed. BACK TO REALITY, the Spurs have championship experience, they are extremely well coached, and have the best player in the game right now. Sorry Dan, it doens't matter that Al Jefferson & Ryan Gomes beat them last year when they had the season wrapped up and were just waiting for the playoffs. CELTS in 7, I've lost control.
Posted by Lynchy at Friday, November 09, 2007