From reading my blog you all know that I have been rooting for BC Quarterback, Matt Ryan to win the Heisman Memorial Trophy all year long. Well I have come to the realization that it is time to make my Al Gore like concession of the campaign, so you got it: (small change of plans)

Point 1: Tim Tebow is the next Heisman winner and that is final. Tebow has 22 rushing touchdowns, 10 of those touchdowns weren't just QB sneaks through the centers 5 hole. For y

ou Darren McFadden lovers, that would be 7 rushing touchdowns MORE than the Razorback has. While we are on McFadden, Heisman Trophy winners are contenders from wire to wire, the 43 yard rushing game against Auburn in a week 6 loss followed by the 61 yard rushing game two weeks later against Florida . . INTERNATIONAL, make him a second place finisher at best. If we are going to concede the Matt Ryan campaign because of his performances against unranked Florida State followed by another loss and bad outing at College Park in Maryland then McFadden has to answer for those two games as well. Tebow compiled 838 yards on the ground and 3,135 yards through the air, to go along with those 22 rushing td's we mentioned , he added 29 passing touchdowns. Tebow never had a game that he threw more than one interception resulting in only 6 interceptions, compared to Ryan's 16, Hawaii Quarterback Colt Brennan's 15, and Missouri QB Chase Daniel who tossed 9 to the opposing team.
Point 2: My hat goes off to coach Jeff Jagodzinski, first year Boston College skipper who did everything but announce that he full endorsed Matt Ryan's candidacy and would do everything possible to raise his stats to those of a Heisman contender. I'm talking absolu

tely refusing run the ball within the 10 yard line, you could argue that this tactic cost the Eagles a shot at a potential National Title run when they lost to Florida State after blowing two opportunities inside the 5 by passing the ball on 3 downs each time. Giving Ryan nearly 60 more attempts than each of the other quarterback contenders for the Heisman and narrowly beating out each of the contenders in passing yards. Given more skilled targets i'm not sure that Ryan wouldn't have thrown for 5-7 more touchdown passes. Jeff Jagodzinski would have earned a leg of the trophy had Ryan won it. His Tom O'Brien moment came at Maryland, losing to a team who they clearly should have beaten in a time when they clearly needed the win, but because of the slippery hands of a Clemson wideout, BC won their spot in the ACC Championship Game.
Point 3: Fans and alumni of other New England schools have desperately wanted to be "The College Program" in the area but we all know this is a professional sports town and we never really embrace the collegiate game 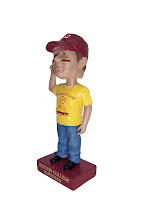 even when the University of Connecticut is storming all other basketball programs, men and womens, in the country. The highly criticized fans of Boston College, referred to by haters as "Superfrauds," a play on their Maroon & Gold tee's labeling themselves "Superfans," did alot for the campaign of Matt Ryan a.k.a. Matty Ice, and they should be applauded. The websites, the t-shirts, and the school supported campaign MattyIce.Com are all excellent displays of fandum. ESPN spotted the BC diehards down in Blacksburg, VA after the miracle win against Virginia Tech, another sign of the campaign. For myself, I love college sports in general, and attending a very small division 3 school doesn't feed the addiction, so I latched on to the most respectable school as close to a college sports powerhouse as New England can provide a.k.a. successful at more than one sport. Thanks to my friends at RyanForHeisman.Com for the T-Shirt, much appreciated.
Point 4: He's not Seattle Seahawks QB and former BC Quarterback, Matt Hasselback, or Pittsburgh backup and fomer BC Quarterback, Brian St. Pierre, and definately not CFL legend and journeyman who is legendary in New England, Doug Flutie, he is by far the best BC QB I've seen and the best pro football prospect at quarterback in 2008. I've yet to see Ryan in any of his years as starter become "rattled" when losing in a game in a hostile environment. Where has he won? I'll name a few places you might be familiar with: South Bend, Deathy Valley, and the previously mentioned Blacksburg, VA. Ryan is as "Big Game" as they get and you know it. Here is a guy who can sit back in the pocket toss three interceptions in one h

alf and shake all that off come out in the second half and lead your team right down the field, through the air, without hesitation. You have to respect that, if not anything else.
Finally, Point 5: While not exactly a portion of the Concession, I wanted to note and send thanks to ESPN.Com writer Gene Wojciechowski for recognizing something that the Hokies and the rest of the college football world seemed to forget, I quote: "Just think if you could take Ohio State, West Virginia, LSU, Mizzou, Hawaii, BC (sorry, Hokies -- BC won on your field), Oklahoma and USC (sorry, Kansas and Georgia -- you've got to win your conference or at least reach your conference championship game to qualify), and then start an eight-team, seven-game playoff." The prospect of that happening would make my f'n head explode and I'm not kidding you. You want to see conference muscles get flexed try that on for size, so the Pac-10 wants to show up the SEC, bring it on, the Big East wants revenge on former members who flew to the ACC, let's see it, you include those Boise St. and Hawaii teams that run the table but haven't really "beaten anyone" in a big conference. This isn't bowl season, this is a playoff which would showcase Heisman candidates against each other, it would showcase a team beating tough battle tested programs 2 or 3 weeks in a row, and who would argue that they deserved to be crowned champion at the end of the day? Reality says, probably someone, but at least you'd have a more defined CHAMP. Bowls for everyone else, conference payouts for the playoff teams, semi-final games be the "BOWL SERIES" and the opportunity for even more money for you capitalists out there.
Posted by Lynchy at Tuesday, November 27, 2007