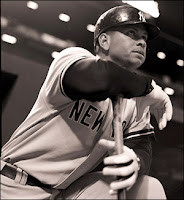 Did you think Wilson Betemit was going to roll out the billion dollar new Yankee Stadium, to open in 2009? Come on, really? So I don't think we should all be "shocked" that both Alex Rodriguez & the Steinbrenner brothers just gave in to each other and came to an agreement.

Brian Cashman, Hank & Hal, and i'm assuming 1/8 of the remainder of George's brain, all communicated to uber agent Scott Boras and Alex Rodriguez along with every media outlet in the world that in the case where A-Rod were to opt-out of his Yankee contract they would not be in the bidding for his services, thus taking the largest wallet in professional sports out of the picture. Good Move
The best baseball player to walk the face of this planet opts-out of a contract which had an additional $80 million left on it along with an offer from New York to extend that same contract giving him a deal totaling $290 million. All the while attempting to up-stage Major League Baseball announcing the decision during game 4 of the World Series. Bad Move.
Yankee brass decides to hold firm on their decision for now, they don't beg A-Rod, they don't even put in an offer. Scott Boras attends the end of the season General Managers meetings, and it is leaked that team A-Rod is looking for a landmark deal in the neighborhood of $350 Million. Boston shows minimal interest and has an offer on the table to series MVP Mike Lowell. The Chicago Cubs are in no position to make a substantial offer because the Tribune company has yet to put the sale of the team through and already has backloaded the contracts of Soriano, Lee, and Ramirez. Essentially taking the top 3 baseball markets completely out of the equation. Bad Move 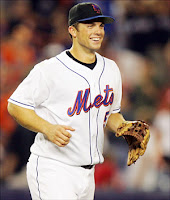 Rumors are swirling around New York, could A-Rod really end up across town at Shea? In my estimation, absolutely not. Omar Minaya & Willie Randolph are wearing thin on the city of New York, the collapse that the Mets took over the last 8 weeks of the season was amazing to say the least. For Omar to invest $300 Million into more offense when clearly the needs of his franchise are pitching would be wreckless, not to mention they already have argueably the best 3rd baseball in the National League under contract, David Wright. Omar isn't that dumb, he reassured Wright as of last week that he will be the 2008 3rd baseman. Good Move
West Coast? The Angels never presented an offer as far as we know but seemed like a good fit for ole' Alex. You leave pressure packed NY for no pressure LA, you leave screaming greaseball fans for the fans who created the 'rally monkey,' and you go from a owners owner to a players owner. On the baseball side, he gives them a huge bat in the middle of their lineup, taking pressure off of Vlad, leads a band of young talented hitters, and plays the hot corner for a team that needs a 3rd baseman. Why they didn't come with an open check book? well I'll leave that answer for the rally monkey. Bad Move for the Angels
The other LA team, well it seems as though getting Papa Joe was enough for them. A-Fraud would have fit perfect there as well, a staff, that healthy, could compete with any other in the National League, in desperate need of another offensive threat and to fill the hole at 3rd base. They have the money, but it seems as though they would rather trade for Miguel Cabrera, in my mind an excellent move, Cabrera is N-A-S-T-Y, but if they don't land him and passed on A-Rod, Good Luck Joe, Good Move contingent
Which brings us where? BACK TO THE BOMBERS
They can't stand Boras at this point, I don't blame them, if not for him they'd still be cashing a $21 Million from Tom Hicks. The image conscious Rodriguez has read the papers, listened to the radio, and watched television for 3 weeks now. He has watched the baseball jesus, Peter Gammons, rip him during the World Series, Braves President, John Scheurholtz claim that no athlete is worth that kind of money, and heard rumours of collusion between general managers. Where does A-Rod look to now? Back to the pinstripes of course. They depths of Yankee Brass wanted this to happen, this is what they needed to begin with, they need A-Rod to ring in THE NEW STADIUM, they need him to break 763 wearing those same pinstripes, and they need the one guy after Jeter on their roster who wasn't worn down. For $275 million dollars, they got it. Boras is deemed the bad guy, A-Rod seems a little less greedy, very little less greedy, and the Yankees are what they've always been, spineless. Good Move
Posted by Lynchy at Thursday, November 15, 2007