Could you find a better set of Champions?

Pap dropped an F' bomb on Letterman, Manny talked cars and gave Steve Carell knuckles on Leno, and David Ortiz told Conan to "go out and get some ass." All things considered I'd say Boston was represented pretty well on late-night talk shows this past week.
The Late Show with David Letterman: Only a week after clinching game 4 of the 2007 World Series with a strikeout, Sox lights out closer, Jonathan Papelbon "jigged" his way out on stage, a dance I have yet to get sick of seeing. There was more than one thing worth mentioning for you who haven't already seen it, if you haven't I'm sure our freinds at YouTube.com could help you out, and if you want to find gorillas having sex, I'm sure they could help you out with that too. Letterman tried as hard as he could to act like he knew one thing about baseball, but he failed misera 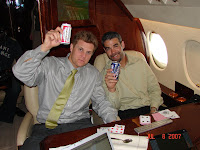 bly, asking questions like, "Is that pitch legal?" and "Does your arm hurt at night?" either Dave was going to see if he could rub down Pap's arm or it was the first thing to pop into his head. Letterman also asked Pap about Mike Lowell, after reading it off the teleprompter and confirming that he had no idea who Mike Lowell was. But the highlight of the night for me was Jonathans dead on impression of David Ortiz, "I got somesing to say (thats not a misprint) if you wear this Red Sox uniform jersey, your a bad motha f*cker." Not only did Letterman turn five shades of red, but Pap apologized, slapped him on the back, and then explained how since it was a quote, he thought they'd be okay with him saying that. I'd like to thank the producers for letting us watch that without cutting it out, it was pure classic late night television, followed by a Girls Gone Wild infomercial.
The Tonight Show with Jay Leno: Manny Ramirez was by far the most comfortable of the Red Sox to appear late night, which is shocking in itself. Ramirez came out on stage wearing sunglasses, i

n a television studio, and hugged both host Jay Leno and resident guest on the couch, The Offices, Steve Carell. Awkward. Within minutes Jay told the audience how a week earlier, (when the Red Sox were in the midst of the World Series) Manny phoned him at his garage to see if he could hunt down a car that Ramirez wanted to add to his collection. Ramirez explained to the audience wha

t Manny being Manny meant, and didn't include how to fans it means we let him take un-explained trips to the DL, and don't get mad at him for not running out fly balls, but no biggie right? Ramirez also brought Jay a baseball helmet for him to wear and cracked a joke about the chins of both Leno and Sox first baseman, Kevin Youkilis. Is it just me or was anyone else sitting at home wondering who took over the brain of Manny Ramirez for the entire segment? After the joke he turned to Steve on the couch and stuck out his fist to give him knuckles, pure comedy. You really have to see this one to believe it.
Late Night with Conan O'Brien: David Ortiz, the first person I've ever seen on Conan who is actually taller than the host. Ortiz came bearing gifts giving Conan a custom

Red Sox jersey with his name on the back & a baseball bat from the Ortiz collection. A life long Red Sox fan, Conan thanks Ortiz for bringing home another championship to his home town and then Conan does as Conan does, he takes over the interviews making the guest feel slightly uncomfortable at his jokes about what they just said, but I laugh. Conan pronounces Daisuke Matsuzaka correctly, already knows the handshake he and Ortiz do, and also adds in the question about what will happen with Mike Lowell, I'm impressed. Conan then tells Ortiz to make sure they get him signed, at this time Ortiz looks into the camera and says "Teo (not a misprint) get it done!" How O'Brien knew about Ortiz giving the Boston Media advice after each interview is beyond me, but he knew that Ortiz would repeat the story, exactly what does he tell the media to do after each game? Ortiz replied "now go out and get some ass" Unfortunately Bob Ryan, Dan Shaugnessy, and Tony Massarotti aren't exactly the "going out getting some ass" type.
As a Red Sox fan, is their anyway to get one member of the Championship team on a late night talk show at least once a week? We'll have the MA state lottery sponsor it, like they sponsored the 2004 trophy going to every town in New England three years ago. Appearing tonight on The Late Late Show, Julian Taveraz. Tell me you wouldn't watch that?
Posted by Lynchy at Monday, November 05, 2007