Who needs a Heisman anyway?

With 2006 Heisman Memorial Trophy winner, Troy Smith, spending time in Baltimore behind the likes of Kyle Boeller & Steve McNair, the question has to be asked, why would you want to win the Heisman Trophy? I admit, I am in a state of depression after Ryan's performance Saturday night and searching for a positive.


Troy Smith was drafted behind 7 other of the nations young quarterback prospects, in the 2006 draft, only one, Brady Quinn, was considered for the precious hardware. There are some obvious reasons as to why Smith falls so far behind other quarterbacks, but NFL teams don't really consider the trophy as a plus on your resume, lately its actually hurts some of the past winners. 2004 winner Matt Leinart saw his stock slip all the way to #10 after leading his Trojans on one of the most impressive runs in D-1 football history, since he has been in the league Leinart has saw little success, and will be out for the rest of this season with an injury suffered after he was all but replaced by Price Chopper employee of the month, Kurt Warner. 2003 winner and Sooner, Jason White, was selected in New York, the 4th Oklahoma Heisman Trophy winner, most recently tried out for the Titans . . . . in 2005. Now Heisman winners aren't always the Britney Spears of parenting, there are some successes: 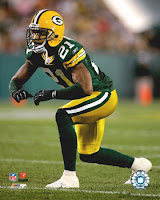 3. Current DB for the Green Bay Packers, Charles Woodson is in his 10th NFL season at 30 years old. During his Junior year at the University of Michigan, Woodson was in the running against a guy you may know by the name of, Peyton Manning. In 1998 he was selected 4th overall by the Oakland Raiders achieving Defensive Rookie of the Year honors in the same calender year. Garnering nearly 60 solo tackles in 2004 and recording a career high 8 interceptions in his first year with the Packers in 2006. I remember watching Woodson play in college, he was filthy. This is the first cornerback, and I'm assuming Deon was like this too, that I witnessed play college football and could change the course of a game with punt returning, defensive play, & he took snaps on offense as well. 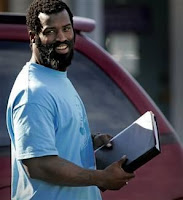 2. Ricky Williams the New Orleans Saints and Mike Ditka expected alot out of one of the most decorated running backs coming out of college over the past twenty years. Williams was not only the entire draft class of the Saints that year, he destroyed the Heisman balloting with 673 more first place votes than the next closest guy (Michael Bishop.) Now his marijuana use has been highly documented from every angle, but from 1999-2005 Ricky eclipsed the 1,000 yard mark 4 times and pushed close to 2,000 in 2002 with the Miami Dolphins. Last I checked Ricky was teaching holistic medicine classes on a herb farm in Washington? He owes the Fish millions of dollars for retiring early, but for some reason, I don't think Ricky cares. 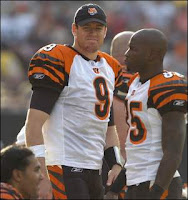 1. Carson Palmer after his heisman trophy winning season at USC, Palmer was selected #1 by the cincinatti bengals. Although this year they absolutely suck and I bet on them losing every single week. Last year alone Palmer threw for more than 4,000 yards to go along with 28 touchdowns, coming off the previous year where he threw 32 touchdowns and for 3,800+ yards. Many think he may be the most gifted QB in the NFL with the brightest future, in a league which boasts studs like Peyton Manning and Tom Brady. Palmer is surrounded with talent in Cinncinati and if only his defense could get on track Cincy would probably be alot more of a threat in the league.


*Leinart and Bush aren't out to farely decent starts . . . . . Leinart has a bit of an up-hill battle in Arizona and Bush is at least surrounded with some good talent which will take pressure off of him.
Posted by Lynchy at Monday, November 05, 2007