Saturday Afternoons Are Back!

Gainesville, Oxford, Tuscaloosa, Columbus, Austin, Blacksburg. You ready? For the next five months your Saturday afternoons are booked. Where the 100,000 seat college football stadiums

are packed. Where the Heisman Trophy is won. Where a rose, an orange, and a bowl of sugar mean a little more. Where the Bayou Bengals light up Baton Rouge. Where Wolverines and Buckeyes step toe to toe. Where Longhorns and Sooners shoot out over the Red River. From The Swamp to Death Valley, all the way to Autzen and The Coliseum, Saturdays are back! Buckle in as the stadiums begin to roar and the National Championship goes up for grabs. Strike your best Heisman pose, stiff arm your office co-workers.

A two-year postseason ban, the loss of 30 scholarships, but yes we're still excited about the Trojans. Believe it! With Lane Kiffin comes his father, legendary NFL defensive coordinator Monte. The Super Bowl winning

coordinator has the fortunate task of working with some of the most talented defensive linemen in this country. Massive tackle Jurrell Casey (6-1, 305 lbs) is anchoring a Trojan defense that also includes defensive end Armond Armstead (6-5, 295 lbs), and Nick Perry (8 sacks in 2009). With a rebuilt secondary led by redshirt senior Shareece Wright and co-captain linebackers Malcolm Smith and Michael Morgan, Monte Kiffin has a top 10 defense on his hands.

Your not going to find a better story than that of Boston College linebacker Mark Herzlich. In 2008 Herzlich was one of the most dominating defensive players in the country and was preparing for his senior season which was going to place the 6-4

linebacker amongst the top selections in the 2010 NFL draft. Then hit with Ewing's Sarcoma, all of that was gone. The reigning ACC defensive player of the year was battling cancer rather than sacking quarterbacks. More than a year after being diagnosed, Herzlich is cancer free and hitting the ground running. After a foot injury set him back this offseason, Herzlich was back at practice this week and plans to play in the season opener this Saturday. Gripping the college football world last season with his story and his fight, Herzlich's return at The Heights this weekend should be a thrill.

A couple of PAC-10 quarterbacks take center Heisman stage. Between Washington Huskies quarterback Jake Locker and the Stanford Cardinal signal caller Andrew Luck, field generals don't get much better than this. Both quarterbacks threw for over 2,500 yards last season and have completion percentages over 55%. 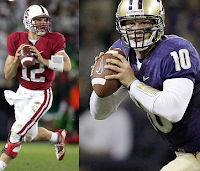 Under the tutelage of great minds such as Washingtons head coach and former USC offensive coordinator Steve Sarkisian and former NFL quarterback turned Standford head coach Jim Harbaugh, Locker and Luck are preparing to tear up the PAC-10 this season. Virtually equal in size, both quarterbacks are top ten draft selections next season, if the younger Luck comes out early that is. In late September Luck gets another crack at the big stage against Notre Dame in South Bend. Last season Luck leaned on the legs of Toby Gerhart and a 205 yard rushing performance, this year it'll be on his shoulders. As for Locker, the Huskies will follow their leader into battle against the Trojans in Los Angeles on October 2nd as they try to repeat their 16-13 win last season, a game which saw Locker complete 21 passes and throw for more than 230 yards. Out are Bradford and McCoy, in is Locker & Luck.

Boise State has their opportunities early. Losing just four games over the last three seasons has put Boise State on the national stage. At the start of 2010, the Broncos are ranked as high as #3 in the pre-season AP poll. Returning nearly every starter from their undefeated 2009 season, a Fiesta Bowl winning season. Boise State fans are

going to get whats coming to them early, a chance to make yet another statement. Monday, September 6th the Boise State Broncos open their 2010 campaign with a road trip to Blacksburg, Virginia, one of the toughest places to play in college football. The Virginia Tech Hokies will be licking their chops to be the first team to beat Boise State since 2008. Behind quarterback Kellen Moore (3,536 yards passing, 39 TD's and 3 interceptions in '09) the Broncos can't slip up if they get out alive, just 19 days later they get 1,400 yard rusher Jacquizz Rodgers and Oregon State, one of the most dangerous teams in the PAC-10. If Boise State wants to knock down the door of a non-BCS team playing for a National Championship, they'll get their opportunity early.

Gators QB John Brantley, wouldn't want to be you. Playing quarterback in Gainesville is tough. Filling the shoes of the greatest Gator of all time, well that just isn't fair. The task for John Brantley, do just that. What can you expect from Brantley at this point? Mop-up duty doesn't show you much, toss stats 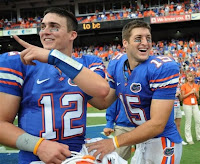 out the window. By all accounts from The Swamp, Brantley's arm is as big if not bigger than predecessor Tim Tebow, even rumours swirling that the offense under Brantley looks even more explosive?!? Probably the most interesting of new quarterbacks on the map this year, Brantley is a completely different stayle of quarterback than Tebow. Where Tim could run first, Brantley's got that big arm. Where Tebow would get in your face and give that speech, Brantley's going to lead first with his game. The 6-3 signal caller stands large over the Gainesville faithful as they know their hopes of a return to the BCS National Championship rest on his shoulders.

The Crimson Tide can repeat, and but can Mark Ingram? Mark Ingram's effort to join Archie Griffin as the only back-to-back Heisman Trophy winner will be more than tough. For Ingram, his biggest competition comes within his own backfield. 'Bama running back Trent Richardson really came on during last years National

Championship game rushing for almost six yards a carry on 19 carries. To boot, Richardson will be taking Ingram's place to start the season as he is sidelined with a knee injury. Secondly, it becomes even harder to repeat as voters know your numbers from the previous year and they've got to be even better the second time around. The 1,600 yards he racked up last year and the seventeen touchdowns, well it's going to be very tough to topple those numbers. Lastly, the Heisman Trust has got their hands full with each and every candidate that is out there. From Terrelle Pryor at Ohio State to Jake Locker in the greater Northwest and all the way back down to the new sheriff of Gainesville, Heisman candidates are all over the map this year.

5. Cleveland Browns Jurrell Casey, DT Southern Cal As noted earlier, under Monte Kiffin expect Jurrell Casey to play a big role this season at USC. Cleveland is going to part ways with defensive tackle Shaun Rogers at the end of the season and Casey is the perfect player to step in. He's quick and and moves well inside, enough to entice Mike Holmgren.

4. Arizona Cardinals Patrick Peterson, CB Louisiana State How could the Cardinals pass on the best cornerback in this draft, possibly the best defensive player in the draft. Pair up Peterson with current Cardinal CB Dominique Rodgers-Cromartie in the secondary and it won't matter what they do on offense. Patrick Peterson is the latest in a long line of hard hitting defensive backs out of the 'Bayou, and yes he brings all that swagger a DB needs.

3. St. Louis Rams Robert Quinn, DE North Carolina Steve Spagnuolo drafted his quarterback this year and just like Falcons head coach and former Jaguars defensive coordinator Mike Smith, the next year he gets his defense right. That being said, no one is going to talk him off of Quinn. Robert Quinn is 6'5", 270 lbs. and moves as if he is half that size. For Spagnuolo, Robert Quinn is going to anchor his defensive line in St. Louis as Strahan did in New York.

2. Buffalo Bills Jake Locker, QB Washington The Buffalo Bills, the Toronto Bills, call 'em what you want but if they can get their hands on Jake Locker you can consider their quarterback issues over and done with. Jake Locker is a big time quarterback who can throw on the move, in weather, and is tailor made for Buffalo. With everyone and their mother clamoring for Jake Locker to be the top overall pick, if the Bills are lucky to draft in the top two, he's their guy.

1. Jacksonville Jaguars Andrew Luck, QB Stanford Andrew Luck is primed to have a terrific season. He's got a NFL quarterback directing him at Stanford, he's got an offense that can run the ball and allow him plenty of time to pass. The Jaguars are going to be looking at a quarterback and possibly a new head coach, if Andrew Luck comes out of college weighing options between he and Locker are going to be very tough. For my money, Andrew Luck with Jim Harbaugh coming back to the NFL is what the Jaguars need.

College football kicks off tommorow night and if I haven't told you already, I'm pretty jacked up!
Posted by Lynchy at Wednesday, September 01, 2010