Titans RB, Chris Johnson doesn't stop. In his first game of the season, last years 2,000 yard rushing champ Chris Johnson continued his assault and torched the Raider defense. The 3rd-year running back out of East Carolina 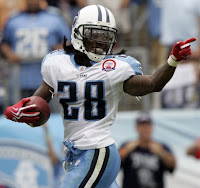 put it in work on Sunday afternoon racking up 142 yards and ripping off 5.2 yards per carry. It's no secret the Titans plan on riding Johnson as far as they can, rushing the ball 39 times on Sunday (27 to Johnson) and passing only 17, Tennessee isn't leaving it up to Vince Young to take them where they want to go. With tough defenses in Pittsburgh, New York, and Dallas coming up, Johnson and the Titans are going to be tested.

Houston Texans break through. If the Texans were going to finally break through Indianapolis it was going to be on the arm of Matt Schaub. Insert rookie running back Arian Foster and his monster breakout game,

and we're scrapping that plan. Foster rushed for 231 yards on just 33 attempts while quarterback Matt Schaub was just 9 of 17 passing. With the big physical wideout Andre Johnson and a defense that boasts All-Pro Mario Williams and 2009 defensive rookie of the year Brian Cushing, the Texans may have just filled their gap. The former Tennessee running back hit the end zone three times as Houston routed the Colts 34-24. As the Colts have had the Texans number for so many years its great to see the Texans finally show up and play their "game." If this is going to be the year for Houston, this start is exactly what we had in mind.

Pete Carroll hits the ground running. Though we say it won't work at this level, Pete Carroll's style seemed to work pretty well against San Francisco. For Carroll, his near 35-year old past his prime quarterback, Matt Hasselbeck, 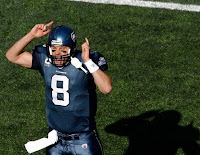 looked pretty damn young spreading the ball around to 8 receivers for an 18 of 23 day. The embattled former Trojan Mike Williams, he just led the Seahawks in receiving catching 4 balls for over 60 yards. The defense that was supposed to be overwhelmed with the 49er rushing attack, held Frank Gore to just 38 yards on 17 carries. As Pete Carroll ran up and down the sidelines slapping helmets and running onto the field, his veteran quarterback looked just as jacked up, his defense looked faster than we've seen Seattle in quite some time, and all due respect to Mike Singletary, but one of these coaches actually looked like his team is buying into his philosophy. It may just be one game but the Seahawks looked better than any team in their division on Sunday and you've got to tip your cap.

Derek Anderson's Arizona Cardinals The Cardinals passed the ball nearly twice as often as they ran it in their 17-13 victory over the St. Louis Rams on Sunday. Only problem, Kurt Warner is no longer under center. Arizona's new signal caller Derek Anderson completed just 22 of 41 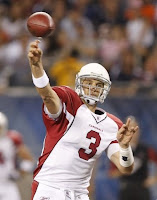 passes and found All-World wideout Larry Fitzgerald just three times. With an injured Beanie Wells the Cardinals once high-powered, tooled up offense, looked very mediocre. Tim Hightower rushed for just 54 yards and committed two of the Cardinals mind blowing seven fumbles. The Cardinals are in for a long season after watching them struggle against St. Louis a team with a rookie quarterback and protection problems. An offense which lost their second best receiver, their quarterback, their backup quarterback, and currently has an injured rusher, well they'll have problems and if the Cards were to make the postseason after watching them play, I'd be shocked.

Brett Favre and his receivers I know, I know. When you've played as long as "The Gunslinger," who needs training camp? However, when your averaging just six yards a pass and seem more out of sync with your receivers than ever, maybe you should have been in camp. After 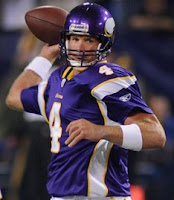 watching HBO's Hard Knocks for the last couple of years I really question Brett Favre's choices. A quarterback is the most important position in professional sports, and Brett should know that. Favre should be in camp with the rest of his teammates motivating them, showing them how it's done, and all in all being there. Here's the thing, Sidney Rice isn't Jerry Rice, get over it. Favre did his team a great dis-service by not getting his behind in camp earlier and preparing for the season with everyone. Lastly, someone needs to come down and remind Brad Childress who is in the backfield, because that guy was in camp and can deliver from all over the field.

Philadelphia not turning to "plan B" on Monday morning I watched that game on Sunday, everyone did. I watched what the Eagle offense looked like with Kevin Kolb, and I then watched them with Vick. Michael Vick moved outside the pocket, looked down field, escaped Green Bay's pass rush, and I swear with another quarter Mike Vick would have dropped the Packers in their path. Then it hit me, that's what Michael Vick was. That's what he does. That's what this 30-year old quarterback from

Virginia Tech who has been to hell and back is capable of. Vick posted a day of over 100 yards rushing and close to 200 yards passing, he tried to throw first to prove he was a passer and when he couldn't he didn't throw interceptions he took off. Sure, four years younger and the gameplan to move to Kevin Kolb isn't a terrible one but it probably isn't the right one either. Why was Andy Reid so unwilling to give Mike Vick the chance to compete for this job? Because both you and I know how exciting it is to watch him play and three quarters of that after what Kolb was doing, well how do you turn back now? I'm all for going with the young guy, but at some point you have to turn to the guy who gets it done. Wait till the Philly fans become restless, it's about that time.

The New York Jets offense 10-21 for 74 yards. No sophomore slump there. If the Jets don't take the reigns of young Mark Sanchez you can bet he won't have a slump, because you can bet they aren't letting him. The Jets offense was lazy and slow. Three field goals, just five carries for Shonn Greene,

the back meant to take the place of Thomas Jones, and to put it bluntly, a real sight for sore eyes. Now to put three field goals up against Baltimore, maybe you can chalk it up to their defense, but that team didn't even look like they were trying. Fortunately for Jets fans you're actually going to get to find out if their fear of Sanchez is real this week. Their next opponent is the Patriots, a team that while they blew the doors off of Cincinnati also allowed the Bengals to do some work in the passing game. Palmer threw for over 300 yards, Ochocinco caught 12 balls for 160, and if the Jets offense isn't ready to attack New England it's going to be a long day again.

Cowboys OL, Alex Barron You can't grab any guy off the street and ask him to protect an offense that is prepared to throw the ball all over the field. You can't trade your scraps to St. Louis and expect a team that has won about six games in five years to give you anything in return, especially not a guy your going to bank on. Alex Barron is just that guy. The Cowboys didn't put enough stock into

losing Flozell Adams, then they got the injury bug which was bound to happen. Both Kyle Kosier and Marc Colombo on the sideline and the Cowboys were forced to move Alex Barron into the starting rotation on Sunday night against one of the toughest players in the league, Redskins LB Brian Orakpo. What happened? Exactly what you knew should have happened. It didn't matter that they gave up seven points on a stupid play before the half, the Cowboy offense should have been able to make that up. Furthermore, when you choose to go out and get another wideout in the draft, as good as Dez Bryant is, then you've got to live with the consequences. For right now, till the Cowboys get their line healthy, your going to have to deal with this and that's how bad it was. Alex Barron holding Brian Orakpo, what else was he going to do?

Being a Lions fan Not only do you start off the season watching your team getting ready to notch up a opening road victory in Chicago only to have it taken away from you on a bad call, but your starting franchise quarterback gets banged up with a shoulder injury again. Tough break. Ouch!

Check out more on TheRightNowPodcast!
Posted by Lynchy at Wednesday, September 15, 2010