Feeling great. Cool outside, coffee is brewing, and most of all college football is alive and well. I've got my Saturday morning picks lined up and ready to go. TCU & Boise State will have their preseason rankings tested, Brian Kelly ushers in a new era in South Bend, and Wolverine head coach Rich Rodriguez welcomes in an old Big East foe from his days at West Virginia. Now make me some sushi and cook me some rice.

Oregon State +13.5 v TCU (At Cowboys Stadium; Arlington, TX) It isn't exactly a home game for the 6th ranked Horned Frogs, but it's close enough. For Gary Patterson and TCU, the near two touchdown favorite on Saturday night, the task is as tough an opener in your neck of the woods can get. Senior quarterback Andy

Dalton will have to be on his A-game after averaging nearly 2,500 yards a season for his first three years at TCU and coming off his best season in 2009. Their opponent, the Beavers of Oregon State, are afraid of no one squaring off against both TCU and Boise State within three weeks of the opener. Why be afraid when you lean on a running back as dominating as the Beavers 5'7" back Jacquizz Rodgers? With a ton of speed in their secondary expect big things from the TCU defense at Cowboys Stadium on Saturday night. Call ; TCU Rolls -13.5

LSU -9.5 v North Carolina (At Georgia Dome; Atlanta, GA) Empty out the children's college funds, tap out your second mortgage, that change between your couch cushions, pull out all that too. As the 'Bayou Bengals come roaring into the Georgia Dome for the SEC v. ACC kickoff, they'll be at full strength, as for the Tar Heels of North Carolina? Down 12 players, including all-world

defensive end Robert Quinn, they're in trouble. With six starters suspended due to NCAA rules violations, Butch Davis' team is in trouble. Receiver Greg Little, 62 receptions and 724 yards receiving; out. Cornerbacks Kendric Burney and Charles Brown; out. Defensive linemen Marvin Austin and Michael McAdoo; out. Since 1959 the LSU Tigers have won 18 consecutive games against the Atlantic Coast Conference, behind future NFL shutdown cornerback Patrick Peterson, the LSU Tigers are going to be all over North Carolina early and often. Be prepared for a blowout in the ATL. Call; LSU -100 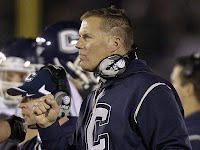 in recent years and more than a player or two drafted in the first round of the NFL draft. As for Rich Rodriguez and the Wolverines, 5-7 last season including losing five straight to finish out the season. The year prior, 3-9 including an embarrassing final loss at Ohio State 42-7. Rodriguez is going to have to turn things around and do it quick, as nothing but controversy and losses have surrounded Rodriguez since he arrived in Ann Arbor. As for Randy Edsall, it's payback time, remembering all those beatdowns at the hands of the Mountaineers and Rich Rodriguez in the Big East. Call; UConn +3

Purdue +10.5 @ Notre Dame (In South Bend, IN) I'm coming around on Notre Dame and their offense. Brian Kelly coached to big numbers and big plays while at Cincinnati and with quarterback Dayne Crist in his debut they'll try and duplicate that same success. To do it through Purdue, may be too early

too soon. Purdue brings pass rushing monster Ryan Kerrigan (13 sacks in 2009). Returning a slew of starters in their front seven Purdue is ready to rattle Crist early and often. He won't be out there alone though, bringing back Michael Floyd will be a big factor for Notre Dame this season and especially during the opener this afternoon. The junior receiver expects to come up big and make a larger name for himself heading into the season, expect Kelly to use him like he did Gilyard a season ago. Being said, I love the Purdue defense and they'll keep this one close. Call; Purdue +10.5

Boise State -1.5 v Virginia Tech (At FedEx Field; Landover, MD) Monday night, not exactly in Blacksburg but close enough for the Virginia Tech fans that won't have to travel that far. If Boise State is going to showcase their top three preseason ranking and prove they're worth 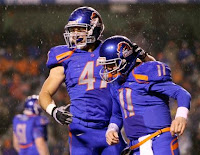 it, what better way? Despite Virginia Tech Hokies running back Ryan Williams, I'm not concerned for the Broncos. Boise State comes to play in big games and you can turn to their Fiesta Bowl performance just a season ago to prove it. Returning nearly every starter from their undefeated season, minus Kyle Wilson, the Broncos are primed to do the unthinkable and contend for a National Championship as a non-BCS school. Kellen Moore is going to burst onto the Heisman forefront and do it against the Hokies. Call; Boise State -1.5

Put it in the bank!

For Audio Lynch check out TheRightNowPodcast
Posted by Lynchy at Saturday, September 04, 2010