1-4 To open the college football season, not good. We've got a full slate this week with three games featuring top 25 teams squaring off against each other. From Norman, Oklahoma to Columbus, Ohio then back down to Tuscaloosa, Alabama the matchups get better and better this week. Sprinkle in a little Rich Rod and the Wolverines heading to South Bend and it doesn't get much better. For the West Coast readers of LynchyRightNow we haven't forgotten about you either, Andrew Luck on display against UCLA, satisfied?

No. 17 Florida State +7 at No. 10 Oklahoma The Seminoles in Norman?!? While it was only Samford, the 'Noles offense looked terrifying last Saturday. Scoring five touchdowns in the second quarter, 59 points in the game, Jimbo Fisher's debut in Tallahassee couldn't have gone over better. As for Oklahoma squeaking out a touchdown win over visiting Utah State and allowing 341 yards passing, well that is the other side of the coin. With senior quarterback Christian Ponder looking to make a Heisman run, a win in Norman would be a great start. Florida State +7, shocks the Red River. 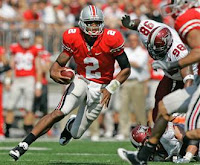 a Miami offense that racked up over 400 total yards of offense. All that offense between these two teams and it's defense we're going to really be waiting for. Ohio State's defense gets after the quarterback and for Jacory Harris who was sacked 34 times last season and threw 17 interceptions, that spells trouble. The Buckeyes could make a big statement with a handling of Miami this weekend, but I'm not so confident. Miami +8.5, that's two straight road dogs.

Michigan +3 at Notre Dame Brian Kelly got his first win as coach of the Fighting Irish this past Saturday and the Wolverines looked very good against Connecticut. In the second week the Irish will have their hands full again with Michigan quarterback Denard Robinson. 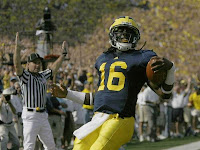 Robinson rushed for nearly 200 yards in week 1 and passed for another 19 completions and 186 yards. The Michigan quarterback moves well outside the pocket and obviously has the numbers to prove it, is the Irish defense fast enough to keep up? While both teams cost me a game a week ago, this matchup is still to intriguing to go away from and will say something about which ever school comes out on top. Does Brian Kelly impress right away or is Rich Rodriguez making the comeback at Michigan? The Irish defense is solid and will have the weight on them this week. Notre Dame -3, can't do three in a row.

No. 25 Stanford -6.5 at UCLA Andrew Luck got off the mat last weekend and opened the season with a monster performance in his opener. Two programs headed in opposite directions in this case. Jim Harbaugh has his team ready to play and make a ton of noise out west this season, just as they did a year ago. Can't get away from Stanford on this one, expect Luck to put up big numbers again as they handle UCLA. Only thing keeping this game close is where its being played. Stanford -6.5

No. 18 Penn State +12.5 at No. 1 Alabama As much as I like the Nittany Lions, Alabama's season doesn't end this early and with a loss and the emergence of both Ohio State and Boise, that is exactly what would happen if Penn State could pull off an upset. Don't expect them not to cover. Penn State doesn't get blown out and this line may be too high for any of our liking. Ingram or not, the Alabama offense still runs the ball with Trent Richardson and plays fast in your face defense, I like the Nittany Lions to cover but make no bones about it, Alabama is winning this game. Penn State +12.5