NFL IS BACK! After a rough showing in game 1 on Thursday night, the NFL is back with a vengence this weekend. We've given you our take on TheRightNowPodcast and now down on print! The opener in the rear view, a big game between the 'Skins and 'Boys on Sunday night, and two Monday nighters to cap it off . .

Atlanta Falcons -2 @ Pittsburgh Steelers Call him interim quarterback Dennis Dixon, but he has the support of the entire locker room and coaching staff. With a soft Falcon pass rush the Steeler backup should have some time to get his feet under him. 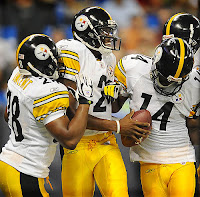 Cleveland Browns +3 @ Tampa Bay Buccaneers This is the worst game of Week 1. However, as previously mentioned on the most recent episode of TheRightNowPodcast, if your involved in a do or die suicide pool, this is the week you get Tampa Bay out of the way because it's the first and only time they'll be favored. Take Tampa Bay -3

Denver Broncos +2.5 @ Jacksonville Jaguars Denver has had way to many injuries to start this season like they did the last. Losing Elvis Dumervil to injury, a player who recorded 17 sacks a season ago, is a huge loss. How many games can you expect to win when you trade your best offensive weapon to Miami and lose your best defensive player to injury? Josh McDaniels is overthinking this. Jax can straight run the ball. Take Jacksonville -2.5

Indianapolis Colts -2 @ Houston Texans So your saying the Colts only have to win by a field goal? If there has ever been a team with a "been there, done that" attitude it's the Colts. They average something crazy like 13 wins a season over the past decade and in all honesty, they love breaking the hearts of this Houston team. While this has to be THE GAME for Houston, it's Indy's to lose. Take Indianapolis -2

Miami Dolphins -3 @ Buffalo Bills While Cincinnati ties up the Patriots and the Ravens look to rip through the Jets, the other contender in the AFC East gets Buffalo! Expect Miami to make things interesting with a healthy Ronnie Brown and a big target in Brandon Marshall for Dolphin quarterback Chad Henne. Things couldn't be more grim in Buffalo with rookie C.J. Spiller being the only bright spot to look forward to. After Spiller gets one early, Take Miami -3

Detroit Lions +6.5 @ Chicago Bears These two teams locked up for the regular season finale in 2009 and Chicago ran wild with a two-touchdown win. However, while adding veteran impact defensive end Julius Peppers in the offseason to ignore, the Bears aren't as good as people

are expecting or hoping. Detroit is getting very young and very good. With quarterback Matthew Stafford and reciever Calvin Johnson already in place on the offensive side of the ball, the defense was next. Adding veteran Kyle Vanden Bosch, a player head coach Jim Schwartz is familiar with from his days in Tennessee, and of course the great rookie Ndamukong Suh. I love the Lions. Take Detroit +6.5

Oakland Raiders +6 @ Tennessee Titans It's all about quarterbacks in this league, you know that. What do we expect from former Redskin Jason Campbell being in control for the time being in Oakland? What can we expect from Vince Young, to me the jury is still out?!? If the Raider defense can't contain Chris Johnson it'll be a long day for Raider fans. Again though, the Raiders are a very tricky team and I just think it's too early for them to put it together. Take Tennessee -6

Cincinnati Bengals +4.5 @ New England Patriots Normally, I love a division winner who can play defense and score with the best of them. However, with Cincinnati I still can't get their playoff performance and final game performance of last season out of my mind. A betting man says New England will score early and often and make this a non-factor. The Bengals are in trouble opening in Foxboro. Take New England -4.5

Arizona Cardinals -4 @ St. Louis Rams What we saw from Sam Bradford in the preseason, well that was preseason. Now at home in front of the only fans with hope for he and his franchise, Bradford meets his first test. For the Cards, Beanie Wells is out, Derek Anderson is bad, Kurt Warner retired, Anquan Boldin in Baltimore, four points?!?!? If the Rams weren't as bad as they've been the last few seasons I'd actually be emptying the sofa cushions for a little coin to trust them with. Take St. Louis +4, for fun.

San Francisco 49ers -3 @ Seattle Seahawks Fire your offensive line coach a couple weeks before the kickoff of the season?!?!? Bad news for the Seahawks. San Francisco has one of the best defenses in the entire NFL. Patrick Willis creates huge problems for Seattle and Pete Carroll is going to have a very long debut in the NFL. Frank Gore goes off in the opener, Take San Francisco -3

Green Bay Packers -3 @ Philadelphia Eagles The Eagles were 17th against the pass last season and Green Bay was 7th in passing. Aaron Rodgers is looking to breakout this year and make a statement. He's got a 1,200 yard rusher in the backfield. He's got

Donald Driver and Greg Jennings catching his passes. More importantly, he's got a shut down defense with a ton of talent starting with veteran cornerback Charles Woodson, linebackers Nick Barnett, A.J. Hawk, and Clay Matthews. The Packers are going to attack Philly early in and often. Take Green Bay -3

Dallas Cowboys -3 @ Washington Redskins As much excitement that surrounds the Redskins, with the line down to 3, I'm all over Dallas now. The Dallas defense is a top tier defense and even with injuries in the secondary they get after the quarterback. Just as it was in the opener with Minnesota and New Orleans, your probably going to get a defensive battle without a ton of scoring. Why?!? Offenses are going to take some time to find their way, and that includes the Cowboys. Big game from Jay Ratliff and DeMarcus Ware. Take Dallas -3

Baltimore Ravens +2.5 @ New York Jets I hope Rex Ryan has been watching the same team that everyone else has. The Jets have done enough talking for every Super Bowl contender there is. On the other hand, more people have hyped the Ravens and their improved offense than any other. For the Jets their biggest opportunity would be to take advantage of that banged up Raven secondary. Unfortunately, Mark Sanchez isn't able to do that and they've got protection problems. Bottom line. Take Baltimore +2.5

San Diego Chargers -4.5 @ Kansas City Chiefs The Chargers have lost some players this season and much like Dallas, it's time to get there or not. But wait, I've picked way to may road

teams giving points already and I'm not about to do that with an inconsistent Chargers team. I love what Kansas City has done suring up their coaching staff, their backfield, and taking the best players available in the NFL draft. Arrowhead is a tough place to play and as the second Monday night game, it gets even tougher. Take Kansas City +4.5
Posted by Lynchy at Friday, September 10, 2010