[1] Arkansas QB Ryan Mallett is not a Heisman candidate. [2] The Texas Longhorns are not the best team in Texas. [3] Whether your willing to admit it or not, a decision on Boise State as a National Champion is still in play. [4] The PAC-10 could be decided just next week in Eugene. [5] Fans of the SEC West, you've got something special on your hands.

With September in the books, college football is off and running. The Crimson Tide escaped Fayetteville with their top ranking still intact and Boise State dropped another ranked opponent. Steaming into October there are several things you need to know, let's get after it!

Auburn, LSU, & 'Bama are firing on all cylinders.

The Crimson Tide rushing attack of Mark Ingram and Trent Richardson continued their assault running for 242 yards and quarterback Greg McElroy completed passes to seven different receivers beating the previously undefeated Razorbacks on their own field. The 24-20 victory in Fayetteville was their first test and with the Gators and Gamecocks on the horizon, it won't be their last.

With their second victory against a top 25 team, the Mountaineers and Tar Heels, the LSU defense is looking sharp. Allowing just 12 points per game in their first four, the Tigers are heading into SEC play (4 of their next 5) at their best. Holding West Virginia stud running back Noel Devine to 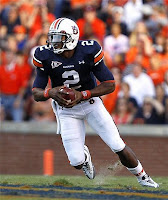 his first under 100 yard rushing performance (14 carries, 37 yards), Patrick Peterson and the Tigers made a statement Saturday night.

A close win in Starkville, an overtime win vs. Clemson, and a comeback victory over Spurrier's Gamecocks late last night. With the echoes at Jordan-Hare still sounding out all over the SEC, the Auburn Tigers won't be sneaking up on anybody going forward. Down 20-7 against a previously undefeated South Carolina squad, the Tigers would outscore the SEC rival 28-7 from the mid-second quarter on. Behind junior quarterback Cameron Newton and his 176 yard rushing / throw for 2 and run for three TD night, the Auburn Tigers are on the map in the SEC.

Check, Boise State won vs. the teams they needed to win against. With wins against Virginia Tech and now Oregon State in their rear view mirror, the Boise State Broncos are going to run the table and see where the chips fall. Aside from strength of schedule, because we know that's where you're going, what makes them different 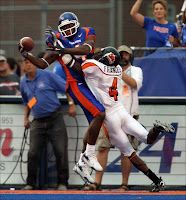 from every other team in college football? They've got quality wins outside their conference, Virginia Tech isn't that team who lost to James Madison that was a hangover loss, and Oregon State is a very good football team who is willing to play anywhere, anytime (in Texas v. TCU, in Idaho v. Boise). Boise State has a Heisman candidate, a real candidate; Kellen Moore [291 yards passing per game, 8 touchdowns and 1 INT, and an over 65% completion percentage]. They've got a team littered with talent from Titus Young, Austin Pettis to running back Doug Martin. A defense that is fast, hard hitting, and can get after the quarterback. If Boise is going make history this year and get to the National Championship, I'm on board.

The PAC-10 is about to get it on! With the Trojans on postseason hiatus, the Ducks and Cardinal are already chomping at the bit. This week in Eugene, Andrew Luck and the Stanford Cardinal are looking to decide the PAC-10 and in their way are the undefeated high flying Oregon Ducks.

Oregon enters this week as the highest scoring offense in college football, averaging 57.75 points per game. With all their points, under the radar is a defense that is allowing 11 points per game and good enough for the 3rd best defense (points allowed), in the country. Leading the Ducks is their star running back LaMichael James. After sitting out in week 1, the 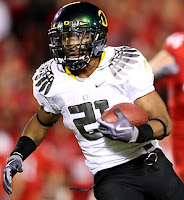 2009 1,500 yard rusher has already racked up 475 yards and four touchdowns in just three weeks. The 3rd ranked rushing offense in the country has already ran for over 1,200 yards and scored 14 touchdowns averaging north of six yards per carry. Scary!

In Palo Alto, the Stanford Cardinal have done just what they've expected to do. Behind quarterback and Heisman candidate Andrew Luck, Stanford has ripped through the first four weeks most recently through South Bend and Brian Kelly's Notre Dame Fighting Irish. However, it was their week 2 35-0 win against UCLA in Pasadena that looks even more amazing now after the Bruins victory in Texas this weekend. And while their numbers aren't as mind boggling as Oregon's, they're close. Luck's offense is averaging 48 points per game and himself has thrown 11 touchdowns with just 2 interceptions. They've proved they can win on the road in South Bend and Pasdena, a victory in Eugene would put this team instantly in the top 5, if they aren't already.

The leaves are turning and so is the college football landscape. Get After It!

Or, Audio Lynch @ TheRightNowPodcast
Posted by Lynchy at Sunday, September 26, 2010