We're less than or almost 48 hours away. The NFL season is about to kickoff, the Saints and Vikings about to get under way. As NFL teams straighten out their rosters and make final cuts as some scramble to fill holes, the stories continue to fly. Let's clean this up and get after it!

Let's talk about new Texans backup QB, Matt Leinart. Or maybe even the 3rd quarterback in the Houston offense. After four seasons in Arizona, one under former head coach Dennis Green and three under current head coach Ken Whisenhunt, former 10th overall pick Matt Leinart's opportunity in Arizona is over. I wanted to however take this opportunity to defend the former Trojan, and we're going to do this with current Jets quarterback Mark Sanchez. In 2006 Leinart's rookie year, he didn't actually play all that bad. All things considered,

Leinart did what rookie quarterbacks do. His rookie year he started 12 games and after the first six he went 4-2 before getting injured before the half of week 15. Leinart may have actually played his best game in a loss at Minnesota that same season. Leinart completed 31 passes and threw for over 400 yards in a 31-26 loss. After Wisenhunt's arrival in 2007, that job was awarded to veteran quarterback Kurt Warner, and Leinart's fate was sealed. However, when it comes to Mark Sanchez in New York, Leinart's numbers were better than the franchise quarterback in New York. Leinart threw for more yards, less interceptions, higher quarterback rating, and a better completion percentage. Now Matt Leinart wasn't just a victim of circumstance, he made bad choices off the field and never really developed early enough. However, going forward at least he's got another shot and hopefully he'll have the opportunity to start at some point.

Placed on the physically unable to perform list, Ravens safety Ed Reed will miss the first six weeks of the season. Yes, this does have Super Bowl implications. 2-2 While Reed was sidelined in 2009 with the same hip injury that is holding him back now, the Ravens aren't the same defense without him. The two losses Baltimore suffered in Reeds absence were absolutely telling of his affect on their secondary. Against Green Bay, the Raven defense gave up 263 yards passing and watched Aaron Rodgers pile 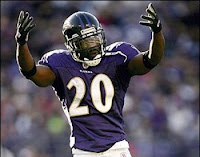 on three touchdown passes. Against Pittsburgh, a division rival, Ben Roethlisberger completed 17 passes for almost 260 yards averaging nearly 15 yards a completion. In the first six weeks of this season Baltimore will face two of the leagues toughest quarterback / receiver tandems all while playing three of these six against division rivals. Week 2 after opening on Monday night against the Jets, the Ravens travel to Cincinnati six days later to see Bengal twosome Chad Ohcocinco and Terrell Owens. Week 6, just prior to Reeds expected return, Baltimore goes up to New England and a healthy Tom Brady and Randy Moss. With a depleted secondary already, the Reed factor is going to play a big role in the AFC early going.

When Seattle released receiver T.J. Houshmandzadeh in a surprise move after only one season in the pacific northwest, the scrambling and rumours began. Would the Redskins add the receiver in the midst of 6-straight seasons of 900+ yards receiving? Would the Vikings look to rebuild their receiving core in the wake of injuries to Sidney Rice and Percy Harvin? The Chargers 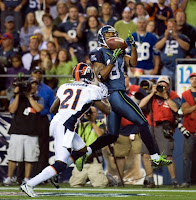 at a crossroads with holdout Vincent Jackson, would they be after Houshmandzadeh? Then, without so much as a peep, the Ravens have signed, sealed, and delivered the 3x pro-bowl receiver right to Baltimore. Replacing the injured Donte Stallworth with Houshmandzadeh makes the Ravens even stronger and a bigger favorite than they were a week ago. With Houshmandzadeh the Ravens bring in a player with experience in the Cincinnati offense, which they'll see twice a year. They bring in a veteran presence in both the locker room and huddle, it should come as no surprise the immediate impact this plays on on the Raven offense. Joe Flacco has got to have a smile from ear to ear at this point. Ask the question, with Rice, Flacco, Boldin and the other new addition, is their offense finally stronger than their defense?

You better believe they weren't starting 2010 without Darrelle Revis. Right now, he's the most dominant cornerback in this league. As far as defenses go, he's the toughest defensive player this side of DeMarucs Ware and Patrick Willis. So you better believe that before the Jets and Rex Ryan enter this season, they were going to do everything they could to make sure Revis was in their secondary. 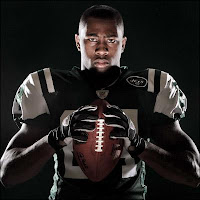 Opening with Baltimore, New England, and Miami, yes the Jets needed to get it done and get it done sooner than later. So you've got to really think about it if your Rex Ryan, you've done a very, very good thing here. Don't let anyone say things like "you had to beg him to come back" because you needed to do whatever they say. This Jets team was 7-7 looking at the outside of the postseason looking in. Luckily, both the Colts and Bengals laid down with their playoff tickets punched and let the Jets sneak in the back door, then they went to work. Those two postseason wins where they gave up 14 points in both on the road and came up with wins, were impressive. As both Rex Ryan and the world believe that second year quarterback Mark Sanchez is going to take a step back this year as their run game tries to recover after losing Thomas Jones, their defense is going to have to really come ready to play. That only happens with the welcoming back of cornerback Darrelle Revis.

For more check out Audio Lynchy

Sanchez was lucky he was draft onto a team that didn't need/want to throw the ball. I am thinking he is about the same rookie QB that Leinart.