Short but sweet. We got a couple things going on this week from waiver wire deals and first place run to the divorce of a guy named Tiger. With preseason wrapping up over the next couple weeks we wanted to get a couple things off our chest.

He's in his 16th season, he's played over 2,200 games, he's squared off in the batters box over 8,800 times. After winning his second World Series ring last season and spending 8 seasons in the most pressure packed baseball crazed media markets in the country, is it any surprise nearly 37-year 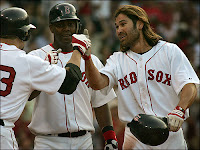 old Johnny Damon passed on being sent back to Boston earlier this week? Of course not. Maybe uttering the phrase "I Love Detroit" was a bit overboard, however that's Johnny Damon for you. Damon will bank $8,000,000 this season playing in Detroit and after a 162 game season, missing a postseason won't be that upsetting to the 2x World Champ. As for the Red Sox, don't think the fans don't see what that move meant. We're suckers for sentiment, what Johnny Damon meant to the 2004 curse breaking season, well we'll never forget that. However, you wouldn't deal for a bat at the deadline, a pitcher to help in the pen, and now you want to bring on Damon? Please, don't try to buy us out like this, it's just insulting.

Golf time now right? Now that divorce is in his rear view mirror, along with the 4 missed opportunities to catch major championship #15 in 2010, can Tiger please proceed? Proceed with lurking on Sunday morning as he dawns that red Nike polo sitting just strokes back of the leader. Proceed with at the very least three consecutive days off top notch golf. Proceed with hammering inferior competition, proceed with 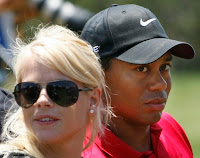 tormenting golfers whom speak out against him, cough, cough, Rory McIlroy, proceed with exciting every fringe golf fan there is on the globe. I get it folks, I'm on board with getting the kids acclimated, I'm on board with handling your personal life, but 2011 Tiger, you better get after it! I can't handle another Masters won by Phil, listening to how great of a guy he is! I can't handle two forgettable winners in the Open Championships, and I sure as heck cannot handle a PGA Championship remembered more for a bunker than anything! Tiger my man, I don't care what you have to do and now that your not married, no one else will either. We want this golf game back, we want you tearing up courses and making more shots than anyone else, let's starter with the Ryder, given you make it and all.

Cause for concern Brett. Just a week or so after Favre watch has ended, things are not going so well in Minnesota. After Favre and Co. got knocked around by the 49ers last week it's been all bad news. Oft-injured receiver Percy Harvin collapsed just last week as more concerns surround his health. Then this week, receiver Sidney Rice (83 catches, 1,312 in 2009) had hip surgery. On

Wednesday morning rather than looking across the huddle at two players who caught more than half his balls a season ago, Brett Favre was staring at 8-year veteran Greg Lewis who caught just 8 passes in 13 games last season. For Vikings fans, these are the exact same things you don't want to be hearing this early in the season. Four of the first six games this season, the Vikings are going to be challenged by Super Bowl caliber teams. Week 1, at the New Orleans Saints. Then a three week stretch for games four, five, and six against the Jets, Cowboys, and Packers, two on the road. If Favre and the Vikes want to duplicate success, 'bout time they get healthy or this is going to snowball.