Bounce back week; Week 4. At least that's what we're calling it. 148 Games in the City of Brotherly Love and they're going to boo Donovan McNabb in Philadelphia. Am I the only one who thinks the Steelers don't need 2X Super Bowl winning quarterback Ben Roethlisberger?!? The Bears aren't the team you think they are, the 49ers are, and the Chiefs being 3-0, well you figure that one out.

San Francisco @ Atlanta After an 0-3 start the 'Niners fired their offensive coordinator Jimmy Raye. With replacement Mike Johnson, that makes the sixth coordinator quarterback Alex Smith has worked under since being drafted by San Francisco in 2005. With that, they travel to 2-1 Atlanta who just had one of their biggest wins defeating division rival New Orleans in The Bayou. Being said, take the 49ers +6.5, big game hangover + must win for Singletary = finally getting a win.

Cincinnati @ Cleveland Despite the 2-1 start, I have my doubts about the Bengals. 8-Year veteran quarterback, Carson Palmer, has underperformed thus far. Throwing just three touchdown passes and two straight weeks of a quarterback rating south of 65, Palmer is struggling. His poor completion percentage of 56.6% is worse than both Detroit backup quarterback Shaun Hill and Cleveland backup Seneca Wallace, both of whom have two starts under their belt. Take the Browns +3, they're at home and getting points.

Seattle @ St. Louis If anyone thought we'd have to wait and see what Sam Bradford could do, they were wrong. The Rams weren't afraid to let Bradford take the reigns early and for $50 million in guaranteed money, can you blame 'em? The rookie quarterback has 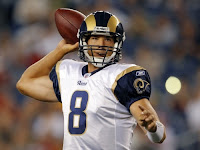 attempted more passes (albeit with far less weapons) than the likes of Drew Brees, Aaron Rodgers, and Brett Favre. Against Seattle, Bradford could have his best day as an NFL quarterback. The Seahawk secondary gave up 455 yards passing to Chargers quarterback Philip Rivers just a week ago. Rams +1

Denver @ Tennessee As good as the Broncos have been against the run, they haven't seen a running back like the Titans Chris Johnson. Johnson has already gone over 120 yards rushing in two of his first three games this season. As much as I don't like the Broncos and am just as unsure as you about what their plan is, they can keep it close in against a run first offense. Bronco quarterback Kyle Orton is getting in sync with rookie receiver Demaryius Thomas (10 completions, 140 yards) and he may just be the perfect replacement for Brandon Marshall. Broncos +6.5

New York (Jets) @ Buffalo Will the Mark Sanchez haters please stand up?!?! [Excuse me while I stand]. Yep, I thought he was Leinart II but he appears to be much more than that. He's managed through two straight division wins including a road victory in South Florida. Is he the next Trent Dilfer?!? Don't knock it, he's a Super Bowl winning quarterback. I wasn't out partying with Braylon Edwards, sober as a judge,

the Jets are legit through three. Don't expect the Bills to put up another 30 points against a division opponent. Even without Revis the Jets secondary isn't nearly as soft as the one in New England. Jets -5

Detroit @ Green Bay The Packers Monday night performance was pathetic. They've made Jay Cutler into the next coming of Christ, yet he only completed 16 passes and had not one but two interceptions called back. That isn't even the worst of it. 18 Penalties for 152 yards, trust me even the Packers weren't overcoming a game played with so little discipline. Don't care that they're at Lambeau, with their horrible play Monday night I'm not about to spot the Lions 14 points, even if Detroit is 0-3. Lions +14

Baltimore @ Pittsburgh I'm not entirely convinced that Big Ben gets his job back in two weeks. Mike Tomlin is a disciplined guy, this organization is still angry with Roethlisberger no matter what he's been doing while on suspension. IF, Charlie Batch were to go out and beat Baltimore improving their record to 4-0 prior to the bye week? Why not!?! The Ravens offense hasn't exactly been dominating, but their defense is exactly as good as they've been over the past ten years. Expect Baltimores defense to put a clamp on the Steeler running game, bank that. Ravens +1.5

Carolina @ New Orleans Now that Saints turn it on, right?!?! A rookie quarterback, a defense that hasn't looked the same without Julius Peppers, and on yes, they're 0-3. The Saints will have to bounce back after two straight weeks looking very un-Super Bowl Champlike. The once high-flying Saints have yet to score more than 25-poins in a game and their defense just gave up over 200 yards rushing. I'm going

against my better judgement in an effort to prove a point. Even the 0-3 Panthers aren't getting spotted 13.5 points. Panthers +13.5

Indianapolis @ Jacksonville Took the Colts giving the same line in Denver last week, and the Broncos are better than Jacksonville. The Jaguars looked absolutely awful against the Philadelphia Eagles, and Mike Vick made them look JV. The Colts need to take care of business in Jacksonville just to keep up with the Texans who already have a leg up on them after the Colts week 1 loss. Doesn't matter who is catching balls for Indy, especially after Manning threw 12 passes to Austin Collie for 171 yards. You thought Vick tore them up? Colts -7

Houston @ Oakland Oakland's rushing game has looked great over the past couple weeks. Running back Darren McFadden is averaging nearly five yards per carry and closing in on 400 yards through just three games. Unfortunately for the Raiders, the Texans are the second ranked defense against the run and Oakland's got no passing game. This game will feature a top ranked passing offense in Houston against a top ranked passing defense in Oakland. Coupled with the opposite in

the run game, get ready for a slug fest. Texans -3

Washington @ Philadelphia Vegas loves the Eagles going forward. We can't get enough of Mike Vick. McNabb returns to to the scene of his greatest accomplishments as a football player. Back to the fans who booed him when he was drafted, the fans who called for his replacement when he didn't know you could tie, when they figured Kolb should take over, and yes they'll boo him again. The Eagles and Mike Vick want this win to get up in the division and stay up. In their loss to the Rams last week, Washington looked bad. The Michael Vick comeback tour continues. Eagles -6

Arizona @ San Diego The Chargers have an opportunity to recover nicely from their 1-2 start. In the next three weeks they get Arizona, Oakland, and then St. Louis. The problem, you ask?!?! Their first two losses were against teams they "should" beat as well. However, it doesn't get easy for the struggling Cardinals. Arizona rolls into San Diego without receiver Steve Breaston who is out due to injury, and a banged up Chris Wells in the backfield. Their best offensive weapon, Larry Fitzgerald, has only 12 touches through the first three games. The Chargers rebound in a big way, Chargers =8.

Chicago @ New York (Giants) The one thing I can't take away from the Bears is the play of their defense. The Bears defense has yet to allow an offense to score more 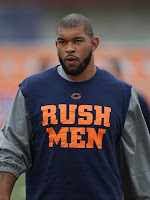 than 17 points (Dallas scored 20, 7 on a punt return). Furthermore, they're getting after the quarterback with new addition Julius Peppers and returning from injury in 2009, captain Brian Urlacher. Between these two heavy hitters and linebacker Lance Briggs, the Bears defense is fast and all over the field. All this spells bad news for a Giants team that needs a win. The 1-2 Giants got beat up last week against Tennessee and couldn't put the ball in the endzone. The Bears stay undefeated folks, especially getting points at 3-0. Bears +4

New England @ Miami Any fan of the Patriots should be alarmed. The Bengals Carson Palmer went for 345 yards in week 1. Sanchez went for 220 and three touchdowns in week 2, Bills quarterback Ryan Fitzpatrick threw for 247 with two touchdown passes in week 3. That's a problem for the Patriots secondary. The New England Patriots will need to correct that before long. This season they've got games against Aaron Rodgers, Peyton Manning, and Philip Rivers, all quarterbacks who will abuse their secondary. The Dolphins however, are in the roughest part of their schedule with last week against the Jets, this week welcoming New England, and following a bye week they get Pittsburgh and Green Bay. That's tough! I like the way the Jets offense moved the ball against Miami this past week and we know the Patriots can score. Big road win for New England. Patriots -1