For everyone of us that refuses to give credence to any and all things West Coast football, the beat goes on! The inaugural PAC-12 Championship Game is just another perfect 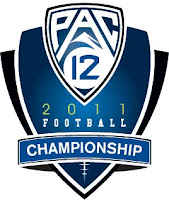 example why when it comes to football on Saturdays, the West Coast and the PAC-12 is JV!

10. The expansion of the PAC-10 to the PAC-12 has gone off with very little fanfare. Additions Colorado and Utah combined for a less than steller 10-15 record in their first season on the Left Coast. An even more degrading 6-12 record in-conference.

9. Neither PAC-12 Heisman candidates; SoCal's Matt Barkley nor Stanford's Andrew Luck will be participating in the conference's inaugural championship game. Worse? Their teams tout a combined 21-3 record yet PAC-12 'commish' Larry Scott couldn't find a way to get the 'real' PAC-12 South champs into the title game?

8. PAC-12 South "Champs" UCLA, had to apply and get awarded an exemption to participate in a potential post-season bowl game. Why? Because 1 of 2 teams

on national display in the PAC-12 Championship Game ended their season with a 6-6 mark, one win shy of becoming bowl eligible through the typical way, winning.

7. SEC East Champion Georgia finished their regular season with a 31-17 road win against in-state rival Georgia Tech. SEC West Champion LSU finished their regular season with a 41-17 victory against a #3 Arkansas team. Big Ten Leaders Champs Wisconsin finished with a 45-7 victory over a ranked Penn State team. ACC Coastal Champs Virginia Tech finished with a 38-0 road victory over Virginia. Those PAC-12 South "Champs" UCLA, they were like lambs sent to slaughter as Southern Cal tuned them up, 50-0.

5. It's the lowest price ticket around, or as I like to refer to it as, the easiest to get! As outlined in this article, compared to the SEC the PAC-12 Championship Game 'cheap ticket' is as little as seventeen dollars which is $121 dollars cheaper than it costs to sit in the last row in Atlanta this Saturday for the SEC dance.

In case you aren't putting this together, conferences expanded to have championship games to have increased revenue, not a discount to the main event!

4. UCLA can get an exemption to participate in a postseason bowl while they didn't meet the seven-win qualifier, but somehow Larry Scott can't require them to NOT fire their head-coach heading into said championship game? How can it be good for the PAC-12 Championship and any revenue which would have been made, if one of the two teams has a head coach on the sideline who has ALREADY BEEN TERMINATED?!?!? Since last Sunday, Washington State has fired Paul Wulff, Arizona State has fired Dennis Erickson, and UCLA has fired Rick Neuheisel, the difference? The Cougars and Sun Devils weren't playing in their conference championship!!!!

3. USC should be playing in this game. I know they've been banned from post-season play, I know they aren't eligible to play in any bowl games, and we don't have the time or the energy to ponder how it's fair for Pete Carroll to be bolt to the NFL without a penalty and Reggie Bush to be making millions in the same league, but somehow the institution which gave them their start is on probation. That being said, the Trojans waxed UCLA 50-0 last weekend, they went to Autzen and dropped Oregon, dashing their national title hopes, and no one is going to stand up for them? Really? Their own conference commissioner who from day one said the penalties were too severe, isn't going to step-in and make a change to the conference by-laws to allow them to participate? Hmmm.

2. This has got to be an empty win/night for Oregon right? They choke in big games as it is, see; 2010 National Championship, 2011 Cowboy Classic, and their November 19th coughing up at a second-straight title 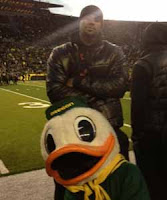 bid at the hands of USC, but now they're going to celebrate a PAC-12 Championship with a trip to the Rose Bowl, having never beat what most consider the best team in the conference? Someone should have told Phil Knight that the next time he wants to bring out a 'Nike' athlete on the sidelines of a big game, it probably shouldn't be a player who failed to show up in big games countless times in LeBron James, not a good idea. Who's next? Jim Kelly?