Is it too early to do this? Nahhhh. By next season, the once-proud Penn State Nittany Lions are going to have to turn the page and hire a new head coach, responsible for one of the toughest tasks any head coach has ever had to do. It's hard enough to follow a Demi-God, but in the wake of recent events in Happy Valley, the task is on an entirely different level. While we're probably not going to get the call to assist the new administration at Penn State on their coaching search, we'd still like to offer up our assistance.

Greg Schiano, Rutgers University head football coach. In our opinion, Schiano might just be the only candidate with connections to the Paterno-era (defensive backs coach '91-95) that we'd even seriously consider, that is if he'd do the same. Not once but twice Schiano has balked at the opportunity to leave Piscataway for greener pastures, those pastures being in Miami at another of his former coaching stops, defensive coordinator 1999-2000. So why would Happy Valley under their

current circumstances draw him out of New Jersey? (1) Schiano has to have concerns about Rutgers place in The Big East conference and the conferences' viability going forward, concerns that don't exist in The Big 10. (2) His familiarity with recruiting in the Tri-State area. Most recently, Schiano and Rutgers landed Pennsylvania's own Chris Muller, offensive tackle from Boyertown, PA and pro-style quarterback Blake Rankin from Bloomsburg, PA. This isn't recruiting on South Beach. (3) Schiano can win, he's turned Rutgers into a winning program. Aside from 2010 and a down year, Schiano had been to five consecutive bowl games with a 4-1 mark. Furthermore, the type of program Schiano runs wouldn't be that far of a cry from what Penn State has run, on the field that is. If the new Nittany Lions brass can get past Schiano having a link to the previous administration, then he might just be a very good fit.

Charlie Weis, University of Florida offensive coordinator. I cannot imagine Weis is long for second-fiddle in Gainesville, and wouldn't be shocked in the least if he made a move at a head coaching vacancy this coming offseason. That being said, doesn't he seem like a good fit in Penn State? Weis is bold, he's brash, he's upfront, he's larger than life (and I'm not talking about his struggles with weight). It's going to take someone

like Weis to shake up Happy Valley. Forget what people said about Weis when he was on his way to South Bend, about bringing his three Super Bowl rings into living rooms of perspective recruits, about being an offensive genius, or anything else for that matter, Weis is a game changer. He still commands respect, could get Penn State alumni excited about football again, and is a big enough name to start the process of pointing the program in the right direction. To me it seems as though Weis just fits comfortably here. On a football level, he can scheme very effectively on offense and could bring in defensive help as well. For Penn State, Charlie Weis would be a different type of help in Happy Valley, a help they desperately need right now, and unlike his time in Notre Dame, he wouldn't be the main attraction, there is a bigger picture.

Kirby Smart, University of Alabama defensive coordinator. Had you asked me on September 11th if Kirby Smart was leaving Alabama at seasons end I would have responded; most definitely. However, that was in the wake of his former Alma Mater, the Georgia Bulldogs, jumping out to an 0-2 record with losses to both Boise State and South Carolina to open the season. I thought Georgia coach Mark Richt was boiling on the hot seat and Georgia would most 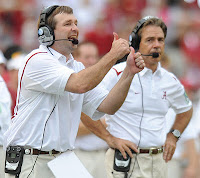 definitely make another run at Kirby Smart as they had following the 2009 season to add him as a defensive coordinator then. With Richt and Georgia peeling off eight straight wins and firmly placing themselves in position for a shot at the SEC Championship, it doesn't look like they'll be a vacancy for Smart in Athens. Which brings us in a round about way to Penn State. Everything about Kirby Smart will be new in Pennsylvania, for both him and the Nittany Lions. Smart has made coaching stops in Tallahassee, Baton Rouge, Athens, and Tuscaloosa, make note of the geographical nature of his stops? He's never coached north of the Mason-Dixon line. Isn't that part of what we're looking for here though? No ties to the region, as far away from the program you can get, yet a man who brings a winning nature with him and the drive to put a powerful defensive product on the field every Saturday. But let's call a spade a spade here, Kirby Smart has been working alongside college football's premier coach in Nick Saban nearly every day since 2004, give or take a season here and there.

Disclaimer; Left out is former Gators head coach turned ESPN college football analyst Urban Meyer, he isn't coming back into the college football fold just yet. If I were to look into the future for the 47-year old Meyer, I'd say his next job won't be till 2014 when Notre Dame gets tired of current head coach Brian Kelly's sideline ways and his failure to reach a BCS bowl game.

It may be too soon to begin thinking about this topic, but just to give you a taste of well-researched coaches that Penn State should be proud to interview and think about hiring, we got it!

For more LynchyRightNow, hit us up on Twitter!
Posted by Lynchy at Thursday, November 17, 2011