Are you tired of Tebow-mania yet? We're not. In fact, we're not even close to tired of hearing/watching/talking about the Broncos 24-year old starting (for now) quarterback. After Tebow's most recent victory, a 17-10 win in Kansas City, we're yet again all buzzing about his play.

The Broncos asked Tebow to use his arm just a mind-boggling eight times while they went to the ground an equally mind-boggling fifty-five times. Was it the dominance of their rushing attack? 244-Yards on the ground, despite injuries to running backs Knowshon Moreno and Willis McGahee. Was it a lack of trust in Tebow's passing ability? A 47.3 completion percentage in his three previous starts. 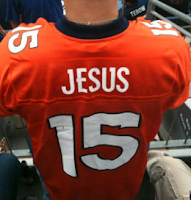 Whichever it may be, the fans have made their decision, head coach John Fox doesn't have the same faith and affection for Tim Tebow under center as they who watch him play obviously do. This is a very big problem for the Denver Broncos brass. Now 3-1 as a starter in 2011, Tebow has the Broncos just one game back of first place in the division and is also growing support outside of the organization with every win he posts in the standings.

Bottom Line; He's winning, selling jerseys, positively affecting the Broncos 'brand,' better yet he's doing everything an organization should want in a quarterback. It's about time John Fox put on a poker face and get behind Tim Tebow.
Posted by Lynchy at Tuesday, November 15, 2011