It's Championship Saturday, we're running the gauntlet and getting after all the games on the dock! After an uninspiring PAC-12 Championship, we're moving on!

#10 Oklahoma vs. #3 Oklahoma State Oklahoma Bedlam Game - Trip to the Fiesta Bowl (possibly more for the Pokes), the Big XII Championship on the line, you can bet there will be some monster moments tonight. For us, we think Oklahoma State has to make a statement against a

very, very good Oklahoma team. The Cowboys haven't beaten Oklahoma since 2002 and it's going to be tough to do it tonight, but they've got the offense to do it. Running back Joseph Randle and the Cowboys offense has had more than two weeks to stew over their disappointing loss in Ames, Iowa. As soon as head coach Mike Gundy and quarterback Brandon Weeden get their running game going, expect them to air it out and let those big Oklahoma State receivers led by Justin Blackmon open the game up and put the wood on the Sooners. Stillwater rises up and pushes the Cowboys & Gundy to the next level and their most successful season in years! Oklahoma State 45 Oklahoma 42

#24 Southern Miss vs. #6 Houston C-USA Championship Game - Let's give some credit and credence to the University of Houston and 15-year starting quarterback Case Keenum, (ha ha ha small dig). Seriously though, you've got to show some respect to what the Houston Cougars have been able to do. They've got a quarterback who has been a Heisman candidate since

day one this season, he's tossed a mind numbing 43 touchdown passes to 3 interceptions, all while leading the Cougars to an undefeated 12-0. It may be a C-USA schedule, however they shut down that Georgia Southern option offense, beat a UCLA team who appeared in last nights PAC-12 Championship, and they wacked an SMU team 37-7 who beat TCU in Ft. Worth. Now Southern Miss isn't a push over, with victories at Navy and Virginia, they've shown they can come to play. The Golden Eagles aren't stopping the Keenum express; Houston 35 Southern Miss 24

#5 Virginia Tech vs. #20 Clemson ACC Championship Game - Primetime on Saturday night with conference elite, while you may not love the Atlantic Coast Conference, the PAC-12 could take something from their championship playbook. We praised the Tigers for winning in College Park, MD earlier this season, and I'm still trying to figure out why? 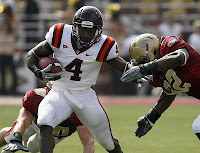 Since that victory on October 15th, Clemson proceeded to drop three of their final five games en route to a disappointing 9-3 finish for a team looking to be a player in the National Championship scene. For the Hokies of Virginia Tech however, they played their cards perfectly. After losing to this very same Clemson team they'll play tonight way back on the first weekend in October, they've been decisive. An 11-1 record heading in to tonight, a defense coming off a masterpiece shutout in Charlottesville last weekend, and a ground game featuring 1,500-yard running back David Wilson. More so, Virginia Tech knows how to win these games and handle their busines in prime-time. Hokies slow down super-freshman Sammy Watkins and toss around oranges; Virginia Tech 30 Clemson 24

#15 Wisconsin vs. #13 Michigan State Big 10 Championship Game- We'll have Virginia Tech on in the back to distract us from Wisconsin vs. Michigan State. In the Inaugural Big 10 Championship, we've got a rematch from an early game which was very exciting and capped off by one of the biggest plays we've seen in college football history. As exciting as

Michigan State's previous win was, a Kirk Cousins 44-yard hail Mary to win it, don't expect the same thing this time around. Wisconsin has outscored it's last four opponents by a combined score of 177-54. On the legs of running back Montee Ball, Wisconsin's super-star running back who has put up 34 total touchdowns, Wisconsin is finding the endzone early and often. Ball has rushed for over 150 yards in each of those four games and Wisconsin will plan on pounding the ball into Jerel Worthy and Michigan State's defensive line all night long. The Badgers get revenge in a big way; Wisconsin 34 Michigan State 24

Finally, #1 LSU vs. #14 Georgia SEC Championship Game- It doesn't matter where the 'Bayou Bengals play, they come to play each and every time. It doesn't matter who they're playing, from Oregon to Alabama to Arkansas, they've answered the bell. Is there a team in the country who can get 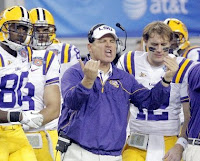 ahead of themselves, and have it NOT be a problem? Yes, it's LSU. I like Georgia's quarterback Aaron Murray just as much as the next guy and he's had an outstanding year bring Georgia all the way back from their 0-2 start to finding themselves where they are today. That being said, it's the Tigers from LSU who get after the quarterback, who turn big problems into bigger problems, who force turnovers, score points, and smother teams. For ole' Les Miles, this win is just as big as any other and they don't care if the National Championship is a lock, they're playing for blood and an undefeated season in the SEC along with that SEC title. LSU 38 Georgia 13