We're closing in on the end of the college football season, with the SEC on a virtual week off, LSU vs. Ole' Miss, Alabama vs. Georgia Southern, and Georgia vs. Kentucky, we're going through the rest of college football and what's on deck!

Quarterback Brandon Weeden & the 'Pokes' get their tune-up tonight in Ames, Iowa. Then, they welcome the Sooners to Stillwater. Win out and the undefeated Cowboys will find themselves on their way to the BCS National Championship and Weeden will wind up in New York with the Heisman finalists. How have 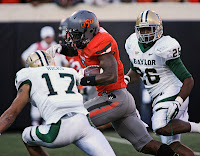 the Cowboys got to this point? Along with Weeden and big-game receiver Justin Blackmon, Oklahoma State also presents an explosive ground attack with running back Joseph Randle. The Cowboys sophomore running back has peeled off 993 yards this season. His most impressive stretch this season was at Mizzou then back in Stillwater against Baylor where he ripped up 290 yards on 28 carries while scoring seven rushing touchdowns. With that kind of production on the ground and Weeden & Blackmon doing their thing through the air, it's no wonder the Cowboys boast one of the nation's most explosive offenses.

So. Cal quarterback Matt Barkley has two weeks. Two weeks to prove he's a Top 3 pick in the 2012 NFL Draft. With his Trojans being barred from post-season play and the PAC-12 Championship, Barkley is going to put his best foot forward against both Oregon and UCLA to close out the season on November 26th. In Barkley's 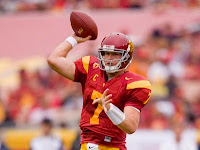 last three outings the Trojan offense is averaging over 40-points a game, while Barkley himself has thrown ten touchdown passes in that same stretch. Even more impressive is Barkley's ability to stay mistake free. The junior quarterback has thrown just six INT's to go along with his 29 touchdown passes. From every angle Barkley is having his best year as a Trojan while being asked to do much more in the offense. Even more impressive is what he's going to do in NFL Draft Rooms, he's going to force Indianapolis to either draft Andrew Luck or someone else, because Seattle, Washington, and Miami aren't giving up the farm when Matt Barkley will also be available. I expect the junior signal-caller to show up big in Oregon and put Autzen Stadium on the edge this weekend.

Typically, I need an excuse to watch Big 10 football. What?!?! Sorry that I don't yearn for ground and pound, slow-paced football. (Don't get me started on Denard Robinson, who can't throw the ball, and Russell Wilson, who is a fraud leaning on Montee Ball's great season). That being said, both Wisconsin and Penn State play big games tomorrow which will have Rose Bowl implications. For all the Penn State coverage for the wrong reasons over the last few weeks, these athletes would

love to put it behind them and reach the Rose Bowl. As for Wisconsin, a trip to the Rose Bowl might make them feel better after having their BCS National Championship hopes crushed earlier this season in Lansing. Can Penn State show up in The Horseshoe and win a very tough road game? I doubt it. Ohio State's seniors are out on 'Senior Day' in Columbus and their last home game. If there was ever an afternoon they were going to show up in a big way it'd be tomorrow. The Badgers however are going to roll through the Illini despite it being a road game for Wisconsin. Why? Illinois is reeling with four straight Big 10 losses after opening the season 6-0, expect another loss and the Big Ten Leaders Division to be decided at Camp Randall next week.

Why am I discussing Houston quarterback Case Keenum? I've been down this road before, with former Texas Tech quarterback Graham Harrell and former Hawaii 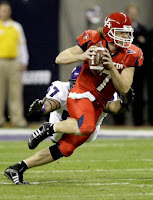 quarterback Colt Brennan, they're great quarterbacks on the college level who put up mind-numbing numbers in a system designed for their abilities. Keenum's Houston Cougars are undefeated, ranked #11 in the BCS, it's impressive, but that is where they stop if you ask me. They aren't Boise State who goes out of conference to beat teams like SEC heavyweight Georgia. His toughest opponent this season was UCLA, a team which is ranked 92nd in points against this season. The Keenum apologists who want to send him to New York with Heisman finalists better be sending Kellen Moore from Boise there as well. I'll give them their due, because to remain undefeated in college football from week to week is hard to do, anything can happen. Ask Oklahoma what happened when Texas Tech came to Norman, ask Wisconsin what happened on the last play of the game in Lansing, ask Andrew Luck what happened last week in Palo Alto? Houston staying undefeated is impressive, but there are limits to the props we'll give them!

Another exciting Saturday on deck, for more LynchyRightNow, follow us on Twitter!
Posted by Lynchy at Friday, November 18, 2011