To End All Discussions

Time flys when you're having fun. The most anticipated November 5th I can remember is finally here. Roughly 35,000 non-ticket holders have descended on Tuscaloosa, just for the experience. Another 101,821 rabid college

football fans will pack Bryant-Denny Stadium on Saturday night. ESPN's College GameDay is in the house, all the parties have arrived unscathed, it's Nick Saban & Les Miles, it's Heisman candidates Tyrann Mathieu & Trent Richardson. For the naysayers of The BCS, what have you got to say for yourselves now? #1 vs. #2 are playing each other for what is perceived to be a spot in the BCS National Championship, what more could you ask for? Time for (1) Louisiana State vs. (2) Alabama, no holding back. . .

For all things 'Bama and 'Bayou, let's get after it!

He isn't the first below average height, game-changing running back out of Pensacola, Florida to tear up the Southeastern Conference, but he's pretty special; see Emmitt Smith. Alabama's Trent Richardson will for sure eclipse 1,000 yards for the season later tonight and most likely add to his eye-popping 17 touchdown total, but even

more so he could place himself atop any and all Heisman candidate lists. Richardson has had a pretty special season thus far to say the least. In seventh-ranked Arkansas' only loss they received a healthy dose of the Crimson Tide's powerful junior running back. Richardson banged out 211 all-purpose yards including 126 on the ground to lead Alabama to a 38-14 victory. 111-rushing yards in Happy Valley, 181 in The Swamp, and 183 in Oxford, Mississippi, yet tonight could be Trent Richardson's night. With the nations top defense in LSU coming to Alabama, Richardson has the opportunity to have his moment and put the 'Tide in position to win a National Championship.

About that defense of the 'Bayou Bengals, it's nasty, it's fast, it is bar none the most dominant defense in college football. Their defense has held conference opponents to just 41-points in five contests, which includes both Mississippi State and Tennessee playing in their home stadiums. You know 'Honey Badger' Tyrann Mathieu and cornerback Morris Claiborne, but 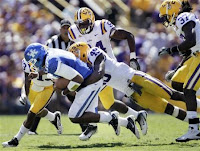 they aren't the only players on that secondary that demand attention. Safety Brandon Taylor and Tharold Simon (1 INT, 27 tackles), are adding teeth to that defense and making it nearly impossible for teams to go to the air on LSU. As for running on LSU's defense? Don't think it is going to come easy for Alabama and Trent Richardson. Super-Oregon running back LaMichael James got just 54-yards on 18 carries. Auburn's sophomore running back Michael Dyer got to sixty-yards, twenty-nine coming on one carry. A defensive line with the likes of Keke Mingo (4 sacks), Sam Montgomery (4 sacks), and Michael Brockers to name a few, strikes fear throughout the Southeastern Conference. Alabama and Nick Saban's offense will have their hands full as LSU defensive coordinator John Chavis has his defense on all cylinders.

LSU doesn't have the only defense playing on Saturday night, 'Bama's no slouch. Between cornerback Dre Kirkpatrick, defensive end Courtney Upshaw, and linebacker Dont'a Hightower, the Tide put a defense on the field that has at the very least three first round picks in next years NFL draft. Want numbers? The Alabama defense is allowing just 6.8 points per game, that's less than a touchdown with an extra point per game! Only Arkansas has scored in double

digits (14) and since that game the Tide defense has allowed just ten-points to Florida, shutout Vanderbilt, allowed just 1 first quarter touchdown against 'Ole Miss before shutting them down the next three quarters, and held Tennessee to just a pair of field goals, how's that for dominating? With Hightower and Upshaw looking to torment LSU quarterback Jarrett Lee into mistakes, and cornerback Dre Kirkpatrick looking to make a statement in the secondary, the Tigers are going to have to pull out all the stops against this rock solid defense that hasn't given an inch all season.

Where is the quarterback talk? With these two defenses, it is no surprise that we have failed to get to the signal callers anytime sooner! To Alabama's A.J. McCarron, he's playing close to error free football completing 67% of his passes 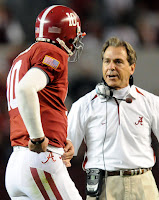 and managing to throw only one interception since the first game of the season. However, it's clear that Saban is holding him back to ensure that Alabama stick to it's plan, play stout defense and run the football. McCarron isn't going to be allowed to feel forced to make extra plays on Saturday night, you can bank on that. As for LSU and quarterback jarrett Lee, with he and Jordan Jefferson both capable of playing the position, Miles has the ability to change up the speed of the offense at anytime to give different looks to Alabama. It wouldn't surprise me however if one of these three quarterbacks makes an unexpected play to win his team teh game, with so much of the focus placed in other directions all week!


'Bama key: The Tide are going to lean on Trent Richardson, we know that. Over the last 477 touches, Richardson hasn't lost a fumble. For Alabama to put it together on Saturday night, they'll have to make sure that continues for no program in the country takes advantages on turnovers as LSU does.

LSU key: Shut down Alabama receiver and return man Marquis Maze. There may be no shutting down the likes of Trent Richardson, but Maze is a playmaker who will feed off that crowd in Tuscaloosa. If the slew of LSU cornerbacks can make Maze a non-factor on offense and contain him in the return game, they'll load the box and make the evening real difficult for Richardson and the Alabama rushing attack.