While we're most thankful for a friday afternoon throw-down in Baton Rouge, between the #1 'Bayou Bengals and #3 Arkansas Razorbacks, we've got some more stuff on the docket. If you're attempting to avoid watching the parade and want a little college football 'stuffing,' get after it!

To the BCS, a playoff on it's own. Week 10; #1 LSU vs. #2 Alabama in Tuscaloosa. While a 9-6 OT loss may not have been what the packed house at Alabama's Bryant-Denny Stadium had been hoping for, nothing showcased the nation's top two defenses better. Week 11; The high-flying Oregon Ducks go into Palo Alto and torch a #4-ranked Stanford team ending their National Championship bid and letting everyone know 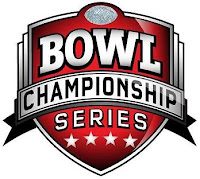 they could possibly be the best of the '1-loss' teams remaining! Week 12; How's a #2 ranked Oklahoma State, #4 ranked Oregon, #5 ranked Oklahoma, and #7 ranked Clemson all taking a nose-dive with losses sound? For the detractors of the Bowl Championship Series, isn't this the best way to sort it out? For three consecutive weeks we've had major landscape changing football outings, something a playoff could only wish for. As for Week 13; #3 Arkansas has an opportunity to play big-time spoiler heading to Baton Rouge to beat the top-ranked LSU Tigers. The Iron Bowl (Auburn vs. Alabama) on Saturday, topped off with #5 Virginia Tech vs. in-state rival Virginia with an opportunity to compete in the ACC Championship. The BCS, well it works!


To Southern Cal quarterback Matt Barkley; Since he and the 'Men of Troy' stormed South Bend in late October, we saw this coming. Despite a post-season ban, (see; Reggie Bush), Barkley is leading the Trojans on a late-season, statement making tour, ripping right through the PAC-12. After going toe-to-toe with

Heisman frontrunner and future top-NFL pick, Stanford's Andrew Luck, we took notice. Then there was Barkley's arrival in Eugene, Oregon this past weekend. Like Maximus arriving in Germania, Barkley squashed the Ducks hopes of a National Championship, they silenced a packed house in Autzen, and he himself put up his banner game as a Trojan. Four quarters later, completing 76.5% of his passes, while finding the endzone four times, and what we wrote a day earlier came true, Matt Barkley is going to give NFL 'war rooms' something to think about!

To our 'flighty' favorite coach, ex-Gator Urban Meyer; At 46-years old, Meyer felt the need to leave Gainesville and the Gators just two years into a six-year contract in order to get healthy and spend time with his family. That was on December 8th, just 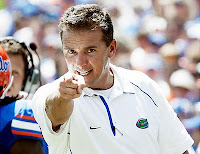 last year. Over the past year Meyer has worked with The Worldwide Leader, covering you guessed it, college football. Now, less than a year from his resignation, Meyer is rumoured to be headed to Columbus. For Buckeye fans, Urban Meyer is the best thing possible. What better way to forget Jim Tressel, 'pins' for Tattoo's, and Terrelle Pryor, than with college football's most elite available head coach, Urban Meyer. With the Buckeyes being out of the mix this season, the Big 10 is going to need it's banner carrier back next season, that's why we're thankful that Meyer isn't holding out for South Bend and possibly is headed to Columbus.

To Boston College linebacker Luke Kuechly; I'm a big fan of the junior linebacker, BIG FAN! Named a finalist for the Butkus Award this week, announced on December 7th, Kuechly is in the midst of one of the most productive careers of any linebacker in recent

college football history. A part of over 520 tackles, nearly 300 solo tackles, averaging north of 14 tackles per game, and more than 10 tackles in 33 of his 36 career games, how's that for production? With Kuechly being announced as a finalist for the Butkus Award (given to the nation's top linebacker), the Rotary-Lombardi Award (nation's top lineman or linebacker), and the Bronko Nagurski (nation's top defensive player), it's safe to say that the under-recruited linebacker from Boston College has really impressed. For his Boston College Eagles (3-8) Kuechly has been one bright spot in a season full of disappointment.

Have a safe and Happy Thanksgiving, eat as much as you can and un-button the top button if you need to men!
Posted by Lynchy at Thursday, November 24, 2011