The NFL is a quarterback driven league, no profound statement there. With the exceptions of Tom Brady in New England and Drew Brees in New Orleans, the top five quarterbacks in this league are former first round draft selections. Aaron Rodgers (24th overall), Philip Rivers (4th overall), 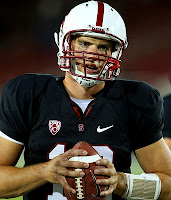 Ben Roethlisberger (11th overall), Peyton Manning (1st overall), and Michael Vick (1st overall). Yes, there are the outliers; see Ryan Leaf and JaMarcus Russell. For the most part however, an NFL team finds their franchise signal caller in the first round. Why am I writing this? Because, current Stanford University quarterback Andrew Luck is bar none going to be a star in the NFL. Worth all the praise, worth all the hype, he's got professional football scouts on both coasts licking their proverbial chops for the opportunity to be on their sideline come next fall. At 6'4", 235 lbs., he's got all the size. With over sixty touchdowns against just fifteen interceptions, he's got the accuracy. With twenty-seven wins to just five losses in three years in Palo Alto, he can win. The only question remaining is, who needs him most?

Obviously, the 'Fins have got to be the first team in line for Luck. An 0-6 record this season, a head coach in the midst of his third straight losing season, and a quarterback Chad Henne, out for the season with shoulder surgery. The Dolphins have been running on empty at the quarterback position since the retirement of Hall of Fame quarterback Dan Marino. Only Jay Fiedler and Chad Pennington

have made it sixteen games without injury as the Dolphins have turned to everyone from Daunte Culpepper to Cleo Lemon to fill their void since 1999. In 2005, the Dolphins selected Auburn running back Ronnie Brown #2 overall with future Super Bowl winning quarterback Aaron Rodgers on the board and journeyman quarterback Gus Frerotte getting fifteen starts later that season. In 2008, the Dolphins selected Michigan tackle Jake Long #1 overall with future Falcons franchise field general Matt Ryan on the board. Now is the time for change, with a new head coaching staff on board next season, Luck would be the perfect guy to headline a 'new look' Miami Dolphins.

It's only his third season in St. Louis, but Steve Spagnuolo should be taking bigger strides as a head coach rather than jumping out 0-6. A year which started out with the Rams being contenders in the NFC West has quickly turned sour. In his second season, quarterback Sam Bradford has been asked to throw the ball between 30-46 times in each of his five starts before suffering an ankle injury. If the Rams continue to struggle, and Bradford continues to take his

time returning from injury, would anyone be shocked to see St. Louis make a move on Spagnuolo at seasons end? Eagles backup Kevin Kolb was worth a second-round pick and a starting corner back this past off season. In recent weeks we saw the Oakland Raiders send possibly two first-round selections to Cincinnati in exchange for a quarterback who was 85% retired. What would Bradford cost? If Seattle, Cleveland, or possibly Denver became interested in Bradford, could St. Louis under a new regime see themselves land a talent like Luck and potentially future draft picks to improve their offense and defense? The Rams have scored the fewest amount of points in the league (56) through six weeks, despite adding offensive wunderkinds Josh McDaniels. As good as things felt in St. Louis last season, improving to 7-9 from 1-15 in 2009, they've drastically turned on the Rams and Andrew Luck could be the way out.

As previously mentioned, what have the Dolphins done since Marino retired? How about the 49ers since Young and Montana? The Broncos since Elway? This is the Colts opportunity forgo any semblance of the mediocrity these other teams have mired in for the past decade plus. I agree with most people, Andrew Luck most likely could jump in from day one and be effective, but he won't do that in Indianapolis, at least not for a year. Forget about what an intelligent kid like

Luck could learn from their future Hall of Fame quarterback, Peyton Manning, focus on what an opportunity for Indianapolis this could be. Here is a kid who went back to college, after his coach went to the next level, why? To win a championship at that level. Haven't you seen that same drive in Manning? Peyton isn't going to say a word if the Colts select Luck, you don't think one of the greatest quarterbacks in the history of the game is secure enough to understand the business side of this? If you're Colts owner Jim Irsay, you've had to put in some calls to your scouting department to determine if it was worth it. In Manning's absence the Colts have gone an mind numbing 0-7, they've been the laughing stock of the league, and truth be told, that has got to be a taste of things to come. If Irsay is thinking longterm with this thing, he'd take Luck and never look back.

As these three teams continue to fall and lose week after week, there is in fact a silver lining awaiting them.