10 Most Hated People in Sport

Of course we love our athletes, we buy their shoes, what they drink, and what they wear but let us take a second to examine the people we don't like in sports. From athletes and fans to owners and management, there are plenty to pick from.

The 10 Most Hated People in Sport.

10. Rory Sabbatini - Yes, an 'athlete' from a gentleman's game is the number ten most hated athlete on the planet. The 32-year old South African golfer is known outside the game only for his comments regarding Tiger Woods, referring

to him as beatable. On Rory's best day he probably could beat Tiger, as long as Tiger was playing blindfolded and with one arm. After the 2008 US Open, you know the event in which Eldrick played on one pin and still won in a playoff, how beatable did he look then? Rory Sabbatini's nearly $18 million in career tour winnings is dwarfed by the $82 mil that Tiger has taken home, nuff said. In the words of Johnny Miller; Rory go clean my pool!

the NHL. That's why I love him. Avery gained national recognition during the 2008 NHL playoffs by parking himself in front of the New Jersey Devils goalie and pestering him all game. Avery became the first person in the history of professional sports to have a rule changed in the midst of the playoffs just to stop him from bugging the crap out of the opposing team. While Avery is loved by "some" fans and could hold some responsibility for the Rangers great playoff run, the New York hockey team is debating whether or not his obnoxious personality will be back with his puck mates in 2009. Could there be a better New Yorker?

8. Randy Johnson - Has any athlete ever pissed off the New York media faster than RJ upon his arrival in the Big Apple? When Randy showed up in NYC the pursuit 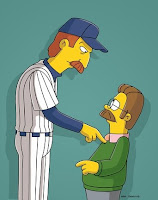 was on, New York media followed the newest Yankee pitcher down the street until the cantankerous UNIT turned and berated them. Randy's tyraid didn't stop one reporter from screaming right back at him: "Welcome to New York." Priceless. Johnson, was a combined 34-19 during his time in New York with a 4.40 ERA and failed to bring the Yankees what they really want, a championship. Luckily for the Big Unit he has spent the majority of his career in Arizona, where the fans are all retired, and Seattle where the fans watch the games from Starbucks while listening to Nirvana, not exactly New York. If you still don't believe he is that disliked, the man killed a bird with a fastball, sick, but impressive.

7. Mark Cuban - Now I like the Mavericks owner, but as far as owners who are involved too much, Cuban is number one. Since Mark Cuban purchased the Dallas Mavericks they have hit highs that the franchise never hit before him. On the other 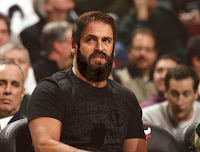 hand the NBA has never handed down more fines to an owner than they've handed down to Mark Cuban. In principle, I agree with Cuban's philosophy on sending NBA players to play in the Olympics. Cuban is right, if I was running a team and paying guys the money that he is, I'd be pretty pissed if they got hurt playing on my dime for another team, I.E. Team USA. As much as I'd like to see Team USA comprised of college athletes, amateurs, it's not. As long as it isn't, the NBA players born in this country have a responsibility to play a sport for their country, once every four years. If Cuban doesn't like that the Cubs are for sale and football isn't a Olympic sport, many teams need driven owners like Cuban. Sorry can't back him on this one.

6. The New England Sports Fan - I'm one of them, I think I know how badly we are hated. First it was in Maxim and now in this weeks edition of Sports Illustrated, articles dedicated to the dislike of professional sports fans in New 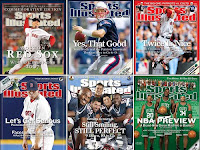 England. 3 Super Bowl Rings, 2 World Series Trophies, 1 NBA Championship, all since 2001. Had enough of us yet? Not so fast . . The Celtis have another run left in them, the Red Sox have become a farm system machine see: Michael Bowden, Justin Masterson, Daniel Bard, and the Pats are coming off a season in which they racked up a record 18 wins before losing in the Super Bowl. Fans from Philadelphia, Chicago and of course New York may attribute to the majority of the hatred toward New England sports fans. Then again I'd hate us to if I had to cheer for the Phillies, Eagles, Cubs, Mets, and Yankees.

5. Joakim Noah & Al Horford - You know who hates these former Gators turned pro? I HATE THESE FORMER GATORS TURNED PRO! If this was a list of who I hate most in the NBA they would be #1 & #1B. That is why they go together on the top ten list, 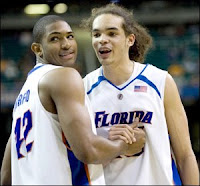 because I cannot stand them. We'll start with Horford, I don't care if he becomes a Hall of Famer, after the 08' Playoffs he's on the list. You should be ashamed that you got a future NBA champion team to play you seven times before bouncing you from the playoffs and you couldn't even finish the regular season above .500, that's pathetic. The fist bumping, jersey popping, self promotion that Horford, who hasn't won anything in the NBA, showed during the playoffs was asinine. Now my boy Joakim, maybe I'll give you a pass for showing up at draft day wearing that rediculous bowtie get up but as for the crying to officials I can't handle that. A man who has been in the NBA for all of 30 seconds shouldn't expect to get calls, it ain't going to happen. Secondly, would it be to much to ask for you to NOT go back to Gainesville after you graduated and walk down the street smoking weed? The Bulls get awarded Derrick Rose, the greatest guard to come out since Chris Paul, and your down in Gainesville playing beer pong and smoking weed? I've had enough of the Florida Gators.

4. Former Players who become GM's in the NBA - For every Danny Ainge and Joe Dumars there are ten Isiah's, Michael's, McHale's, Bird's, and of course Steve Kerr's. Has the experiment folded yet? Do we still think that the guy who brought

(the ball up the court is the same guy who can win a championship from the owner's box? After drafting Kwame Brown with the #1 pick and crushing the Wizards franchise Jordan has moved onto Charlotte. While in Charlotte, Jordan has drafted every middle of the road college player to come out of the tournament, Adam Morrison (smokes cigarettes) anyone from North Carolina, and a new point guard D.J. Augustin let's add another young point guard) Things we don't need for 500 Alex! glad to see he follows March Madness. Steve Kerr went from the broadcast booth to the GM job in Phoenix, that would be like going from bagger at a supermarket to owner of the supermarket. So why are wondering why he traded for Shaq who proved to us WHY the Heat sucked when Wade was injured. Kevin McHale hahahahahahahahahahahahahahaha, now you got Mike Miller and Kevin Love, here come the T-Wolves. No seriously though, Kevin Love? I really feel bad for Al Jefferson after this one. When O.J. Mayo is a 2-time All-Star by 2011 and Kevin Love is playing for Tel-Aviv, McHale will still have a job somewhere. Isiah Thomas, so you folded the CBA, destroyed the Toronto Raptors, got fired by the Pacers, and got an even better job with the Knicks? Sounds right, he even escaped a sexual harassment claim with his job intact. Tell me how ANYONE with a clean record wouldn't have been better?

3. Hank Steinbrenner - I can't believe we got this far without talking about someone currently involved with the New York Yankees. After taking over for George, son Hank has not fallen far from the tree. Undermining general manager Brian Cashman and new manager Joe Girardi has come easily to the Yankee owner. Hank 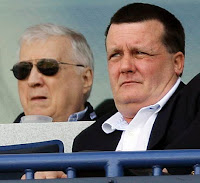 doesn't keep his comments at home, oh no he's already started in on the so called Red Sox Nation, Inter-League play, and construction workers. Demanding that the buried David Ortiz jersey (laid in the concrete mix of the new Yankee Stadium) be drilled up and the concrete be laid back down was just his first act of lunacy in a sure to be long string of them.

Hank on Red Sox Nation: "Red Sox Nation? What a bunch of shit that is, Go anywhere in America and you won't see Red Sox hats and jackets, you'll see Yankee hats and jackets. This is a Yankee country. We're going to put the Yankees back on top and restore the universe to order." (Hunger, Poverty, War, and Disease . . . .but the Yankees on top will restore the universe)

Hank on that construction worker: "I hope his coworkers kick the shit out of him." nice.

2. Barry Lamar Bonds - I like Bonds, believe it or not. I even respect 762 career home runs and a career .298 batting average. Unfortunately I think I'm one

of the only ones who does. Sure the media hated Barry, (that's his fault) but fans and former players alike have turned Barry into the plague. The all-time home run king will be doing card shows in Las Vegas for the rest of his life, and he'll never add HOF (Hall of Famer) to the end of his signature. That's a tough pill to swallow after dedicating the last 22 years of your life to one game. As much as Barry will tell you he doesn't care about that, of course he does. It isn't just Barry's cold and mean side that turns people off to him, McGwire was the nicest guy in the world and NO ONE came to his side after he was found guilty in the court of public opinion. Barry won't ever be able to escape what he is remembered for and that will make him our generations Pete Rose; not a great guy to follow.

1. Congressional Subcommittees and Bored U.S. State Senators - Hearings on drug-testing in major league baseball, wether or not Roger Clemens lied to investigators, subpoenas meant to place athletes in jail, and a video taping scandal that means nothing to people with real jobs. What's on the docket next Mr. Senator? I've explained in the past how crazy it is to take these men down to Washington for a show in front of the fans but they just don't listen to me. (shocking) 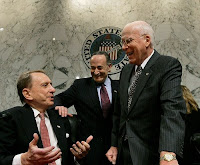 Subcommittees and Arlen Specter need to spend more time on fixing the problems domestically rather than looking to grab popcorn headlines and get on a couple radio shows. In no way should Specter be concerned about what the New England Patriots do to get a competitive advantage. If athletes decide to put needles in their ass, leave the narcotics police to that, our tax dollars don't need a hearing. I've never heard any fan say "I'm glad their doing this, I'm glad that things will be right after they get a hold of them" never, nope it won't EVER happen. Fans have more worries, what will their kids have for food at night, when is my next pay check coming in, and why the F*CK am I paying $5.00 a gallon for gas?
Posted by Lynchy at Monday, June 30, 2008