Nail In The Coffin

I thought the transition from NBA playoff basketball to mid-June baseball would be a seamless one, WRONG. It's like a meth addict trying to stay clean while all his friends are busy doing what meth addicts do (errr playing whose got the cleanest needle maybe?) While I'm trying very hard to ween myself off of the NBA several things have still gone unsaid and several things are still happening. Because I don't believe that the Tampa Bay Dev . .oops, I meant Tampa Bay Rays will be hanging around come September, (I should remind you they've never finished above .500) and the College World Series is about as exciting as a funeral were going to stay with hoops for the next week or two, or whenever I decide not to because this column is primarily about doing what I want, deal with it.

With Shaq going to the Suns (we'll get to his rapping exploits in a bit), Pau to the Lakers, and J-Kidd to the Mavs would you ever have expected that the biggest deadline move was the Celtics pulling P.J. Brown out of retirement?

J-Kidd was a train wreck in Dallas, if you don't think so see Avery Johnson on the unemployment line and the New Jersey Nets with a quality young guard in Devon Harris. Good call Cuban. Surprised that despite your best efforts to slam the U.S. men's basketball team, somehow your starting point guard, Jason Kidd, ended up on the team? Make friends Mark, not enemies.

Pau to the Lakers worked out great, until June. The Lakers are the premier team in the Western Conference, no bones about that. But do we need anymore examples of European players being "soft" than what we just saw in the Finals? No one saw it coming, NO ONE, that the Lakers would get completely physically dominated in the Finals. Maybe Andrew Bynum was more of a loss than anyone of us thought, but can you say, with certainty, that Bynum would have rolled over P.J. Brown and Kendrick Perkins in the Finals? No matter how many talented Euros you have, Vladimir Radmonivic, Sasha Vujacic, and Pau Gasol, you still need players who are willing to fight and bang down low, hopefully Bynum can be that guy, Pau isn't.

After the season ended Steve Kerr had to look at his roster in Phoenix and say, what the F*CK did I do?!?!!?!? A team that was among the top contenders in the Western Conference when they dealt away future free agent and un-signable Shawn Marrion in exchange for the Big Aristotle. The Suns were quickly sent home by the Spurs, followed by the departure of one of the top coaches in the NBA, Mike D'Antoni, to the KNICKS of all teams. When the Knicks seem like a better option than what you currently have, your in trouble.

But as the story goes, Doc and Danny give P.J. Brown a call and tell him they believe he is a key to Banner 17. A retired veteran re-enters the league in March and is playing in the Finals by June. Not only did Brown play in the Finals but he played HUGE in the Finals. When Kendrick Perkins and Kevin Garnett got in foul trouble early, P.J. entered the game. He was methodical in the use of his 6 fouls, fouling to prevent easy lay-ups and moving his feet while playing outstanding defense. P.J. Brown withstood the attack of the Pistons bigs off the bench, he manhandled the Lakers, and finally won his 1st NBA ring after a long career. When Perkins was out with an injured shoulder it was Brown who stepped up in games 5 and 6 to help with the load. Not Shaq, Pau, or Kidd was as prevalent as P.J. Brown was in the playoffs.

My friends and I are coming up upon our second annual NBA Draft Party. The Inaugural Draft Party consisted of 4 guys, two cases of miller, and a three-day hangover, among other things. This years draft party will be slightly better, with the Celtics picking nowhere near the lottery, a half-day of work on Friday, and the whole weekend off, let's just say excited is an understatement.

To more pressing issues . . we highlighted the NBA draft of 2007 because of young talents Greg Oden & Kevin Durant, the clear cut 1 and 2 of the 2007 draft class. With Oden on the pine with injuries during the season we have yet to see the value, but with Durant, the 2008 Rookie of the Year, we can see the instant impact rookies can have. After picks one and two this year I plan on playing how many Euros drafted before I black out, over under on 4.

To lead you down a long winded path of who I think SHOULD be the #1 pick is irresponsible, Michael Beasley or Derrick Rose I can't make up my mind. If you recall earlier this summer I attempted to do so and came up with Beasley, after going back and fourth my opinion has changed.

Derrick Rose is as exciting as they come, if this kid wants Chicago as bad as he says he does, make him the king of the city. Sure it'll take some moving of parts and some ball washing on the part of Kirk Hinrich but it's worth it. If Rose can be the type, not exactly, but the TYPE of player that Chris Paul is, he's worth his stock. The Bulls aren't relevant right now and despite popular opinion, I don't think it's a

quick fix. With Beasley or with Rose the Bulls don't know where they are going and that is in fact the larger issue.

The coaching search they just conducted appeared to be a clusterf*ck, plain and simple. After being the leverage for Mike D'Antoni to get the type of dollars he did in New York, their next look was at former Bulls coach Doug Collins. Collins last winning season came in 1996 with the Pistons, that would be TWELVE years ago. Lucky for the Bulls Collins passed on the offer. The Bulls ended up hiring first time head coach, Vinnie Del Negro. The Suns former assistant general manager, not assistant

coach, nope just a front office guy with years of playing experience. No knock on Del Negro, but was he really the guy to right the ship?

I'm curious if John Calipari was given a call, the prospect of the Bulls with the top pick, Rose wanting to come to Chicago, and his college coach who can clearly coach young talent. Just a thought.

Speaking of that Draft

With the Celtics closing a deal for Ray Allen followed by the acquisition of Kevin Garnett it was clear that the Celtics were being most active among playoff hopefuls. Several teams will see the C's success and think that A: it can be turned around that quick and B: they have the people to turn it around that quick. So the remaining question is, Which teams believe that?

The Detroit Pistons. By now you know that the Pistons have been to 6 consecutive conference finals and risk the chance of becoming the Atlanta Braves of the NBA. Since beating the Lakers in 2003-3004, the Pistons have not only been rolled up by 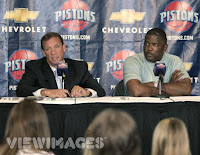 the Cleveland Lebrons in 2007 but were dispatched at home in 2008 by the eventual WORLD CHAMPIONS (god I love saying that).My theory on the Pistons is they actually do have ENOUGH to win a championship. In the postseason the emergence of Jason Maxiell and rookie guard Rodney Stuckey makes players Rasheed Wallace & Rip Hamilton expendable. While I like the play of both veterans it is clear that the Pistons need a shake up, and Joe D is the first one to say so. After the firing of Flip Saunders, who the players didn't respect, and hiring the coach they wanted to play for Michael Curry, the Pistons will be active this off season, very active.

The Miami Heat. The Heat dumped the contract they didn't want most in February, Shaq out. With Wade clearly being injury prone due to his style of play and lack of teammates around him the #1 goal is to not waste one of the top 5 players in the NBA. 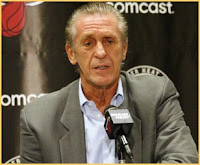 The Heat will get Marrion to stay on South Beach, and make a splash in the draft. Clearly they don't think Beasley is the guy for them, as crazy as that sounds. I really think the Heat will make a couple mistakes in this offseason, they'll be active, but they won't be successful in my opinion. The rumours that have been floating around is their interest in Carlos Boozer when he becomes available after the 2009 season. If history tells us anything about Boozer its that he isn't exactly a reliable guy circa ditching the Cavs and Lebron for Utah. If your going to pass on the most dominating collegiate scorer of the last five years, Mike Beasley, in hopes that Carlos Boozer does what you want, you better have the checkbook ready. (I still haven't gotten over what they did to everyones favorite Pizza man, Stan Van Gundy)

If you haven't heard of Shaq's free styling in the NYC nightclub over the weekend, don't worry it went something like this:

Shaq is ludicrous, not the rapper. I've always like Shaq, I thought he was entertaining and I also thought that offenses should be run through him instead of around him. That was when he was on the Magic though. Shaq is a complete horses ass. 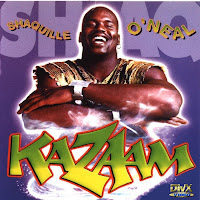 His rapping is about as good as his free throw shooting. I don't care if he has to carry his ass up and down the court for 82 games a year and then the playoffs, he is a professional athlete and should just get in shape and make it easier on his knees and ankles. Unfortunately Shaq always considered himself better than that, he was to good for others to tell him what to do and how to do it, he relied only on his god given size and hoped the rest would come. Kobe may be 0-1 in the championship without Shaq, but the big man is kidding himself if he thinks he's the result of Miami winning a championship. D-Wade played unreal in that post season and ran the Mavs right off the court in the Finals. Wade averaged 28 points and 6 rebounds a game in the 05-06 playoffs. The Diesel put in a mere 18 points per game in those playoffs, a far cry from the 30 points a game he put in during the Lakers first of three championship runs. Say what you want about Kobe, he spends his off season playing in the Olympics and adding something to his game, Shaq is rapping in a night club.