The game is 48 minutes long, not 24. I would like to breath a collective sigh of shock, awe, and relief for all of New England. I don't rock my sunglasses at night but if I was James Posey, the Ray-Bans would be coming out tonight. The Celtics silenced a rather rawkus Staples Center crowd in route to the greatest Finals comeback in NBA history; HISTORY.

Phil is forced to hit the podium shortly after the loss. Leaving Kobe alone with the

underlings after probably the most upsetting loss of his career. Only being locked in a room with Hannibal Lecter would frighten me more. We got to witness Paul Pierce list his own accolades, first time that's ever been done:

"I was part of the biggest comeback in playoff history in 2002 against the New Jersey Nets, remember that, so I do know what it takes"

While not the modest of players, Pierce did attempt to give the usual lines, we take one game at a time, I'm only thinking about Sundays game, and my favorite, this series isn't over yet. I have man love for you Paul but you just dropped a team after being down by as many as 24 points, your up 3-1, and I don't care if the Red Sox did it in 04', this series is O-V-E-R.

After getting absolutely run off the court by Lamar Odom and the L.A. Lakers in the first half, the Celtics went into the locker room down 18. I had began my assault on a twelve pack and was sitting in shock. Little did I know that the Lakers would play 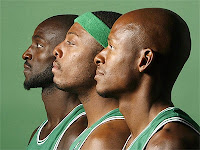 no defense in the second half while allowing James Posey and Eddie House to play the Celtics back into this game. Pierce was determined to hold Kobe down in the second half, and even after Bryant drilled a jumper right over him, Paul went down the court demanded the ball put two moves on Kobe and sunk a mid-range shot right in front of him. I'm done arguing about it, Paul Pierce deserves to be called THE TRUTH, he is THE TRUTH, and needs to get WAY more respect. Telling Vladimir Radmanovic to chase Pierce around the court is sinful; Pierce controlled the ball, ran the offense, and found the open men. When the Lakers took a four point lead late in the fourth and I thought the comeback was all for nothing, James Posey nailed a three followed by a Eddie House jumper to put the Celts up by 1. The game was over after that, you don't claw back, take a lead and then lose the game in the FINALS. Ray Allen placed the nail in the coffin by breaking Sasha's ankles and taking the ball to the rack. BALL GAME.

I have never seen a more critical loss than what happened last night. If the Lakers had lost a game that was close for the whole game, even that wouldn't have been as bad. Snatching a win in game 4 gave the Celtics that feeling, that feeling they had when they ended the Rockets 22-game win streak, that feeling they had after dismantling the Hawks in game 7, the feeling after Pierce dropped 40 on Lebron and the Cavs to send them home. I think Jim Armstrong of the Denver Post owes us all a retraction; he was right, this series has seemed lopsided, not to the Lakers side though. (shhhhh, but Ray Allen is having a HELLUVA series)
Posted by Lynchy at Thursday, June 12, 2008